Donald Trump’s impeachment defense strategy will be put to the test today as one of his top diplomats appears before House committees to explain his call for Ukraine to investigate former Vice President Joe Biden.

The fact that Gordon Sondland, U.S. ambassador to the European Union, is set to appear for his private deposition is the next step for the panels leading the probe, after difficulties scheduling other requested testimonies. Lawmakers will be testing Sondland’s willingness to offer clear answers and his loyalty to Trump.

Sondland, a hotel executive who donated $1 million to Trump’s inaugural committee, came under increased scrutiny last week after Kurt Volker, the former special envoy to Ukraine, turned over text messages in his closed deposition that showed Sondland seeking to encourage Ukrainian officials to agree to “the deliverable.”

To get to the bottom of that request, Democrats are trying to establish what leverage Trump used to ask Ukrainian President Volodymyr Zelenskiy to investigate Biden, now a political rival for the 2020 election. They have faced broad resistance from the Trump administration, as the president and his legal counsel reject demands for documents and witness testimony.

Trump has responded furiously to the impeachment process, calling the inquiry a “scam” and a “witch hunt.” He will hold political rallies this week in Minnesota and Louisiana, and will likely offer his own defense to his most passionate supporters. Read more from Anna Edgerton. 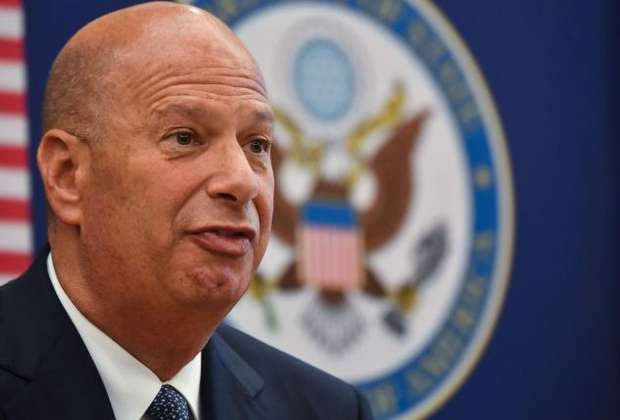 Swing-District Democrats Defend Inquiry: Trump has erased any lingering doubts among the swing-district Democrats who galvanized the House impeachment move two weeks ago despite the risks to their re-election chances in 2020. The decision by seven first-term Democrats elected in Trump-leaning districts to back an impeachment inquiry after months of resisting the idea tipped the balance in the House and helped spark Speaker Nancy Pelosi’s (D-Calif.) decision to announce the investigation.

Now they are back home during a congressional break, facing voters as well as a concerted effort by Republicans to make them pay. At town halls and in interviews, members of the group express no regrets. Erik Wasson and David Welch have more.

Perry Recommended Donor to Advise Ukraine: Energy Secretary Rick Perry recommended to the Ukrainian government a former political donor and a Houston oil executive as advisers, an Energy Department official familiar with the matter said yesterday. The episode could draw the former Texas governor into House Democrats’ impeachment inquiry centering on Trump’s interactions with his Ukrainian counterpart. Perry has denied wrongdoing and has vowed to cooperate with the investigation. Read more from Ari Natter.

BGOV Podcast — GOP Targets South’s Only Democratic Governor: Voters in Louisiana will go to the polls Saturday for the state’s open gubernatorial primary, as incumbent Gov. John Bel Edwards (D) tries to hold off two Republican challengers. Trump will hold a rally in the state Friday ahead of the election in an attempt to keep Edwards from winning 50% of the vote tally and force a runoff election next month against the top Republican vote-getter. On this episode of “Suspending the Rules” from Bloomberg Government, deputy news director Loren Duggan and staff correspondent Jennifer Kay preview the election and its potential national implications.

Listen and subscribe to Suspending the Rules from your mobile device: Via Apple Podcasts | Via Overcast | Via Stitcher | Via Spotify

Biden Unveils Proposal to Boost College Access: Joe Biden unveiled an education plan today that focuses on making colleges more affordable and strengthening pathways to the middle class that do not require a bachelor’s degree. The proposal calls for a $750 billion investment in educational opportunities after high school that would be financed, according to the campaign “by eliminating the stepped-up basis loophole and capping the itemized deductions the wealthiest Americans can take to 28%.” It would provide two years of community college tuition free while also helping students in the two-year institutions with textbook and transportation costs and other expenses. Read more from Tyler Pager.

Klobuchar Nets $4.8 Million in Third Quarter: Sen. Amy Klobuchar (D-Minn.) raised $4.8 million in quarter three, a total that topped her previous haul by $1 million but put her far behind most of the other candidates in the race. The campaign said about 90% of Klobuchar’s donors gave less than $100, and the average donation was $29.78. She had 105,000 contributors in the quarter, surpassing the Democratic National Committee’s donor threshold for qualifying for the November debate. Read more from Bill Allison.

Trump’s Confounding Syria Moves Spur Policy Confusion: Trump’s surprise announcement that U.S. forces would stand aside if Turkey invades Syria sowed chaos in his administration, drew criticism from his allies in Congress and left Kurdish fighters feeling betrayed. Yet after a day of confusion, it wasn’t clear how much American policy had really changed. It was, in short, another example of how foreign policy gets made in the Trump era — with the president delivering one message, his advisers providing another and then Trump sometimes adding a third for good measure. Abrupt foreign policy shifts are taken after limited consultation with staff and emerge in confusion and contradictions.

Initial reaction to the White House’s Sunday night statement — that American troops “would no longer be in the immediate area” if Turkey moves into Syria — was one of shock, including from Trump’s allies. After hours of such outrage, administration officials who briefed reporters on condition of anonymity sought to minimize the impression created by the commander-in-chief: The U.S. still urges President Recep Tayyip Erdogan not to invade Syria or to attack U.S.-allied Kurdish forces that the S yrian leader considers terrorists, they said. Only a few dozen U.S. troops were being pulled back, they said. The Defense Department added that Turkish aircraft have been removed from daily air operations by the U.S. and allies above southern Turkey and northern Syria. Read more from Nick Wadhams and Glen Carey.

Trump Mines Weak Spots in Foreign Leaders: He might be fighting to salvage his presidency, but Trump can still smell weakness in others. The result is that conversations between Trump and foreign officials have the potential to produce dramatic and unpredictable outcomes, one way or another. In his efforts to discredit his domestic enemies, Trump has solicited help from Ukraine’s rookie president, a collapsing Italian government, an Australian battling China and Boris Johnson of Brexit-divided Britain. Next up could be Romania, where the prime minister’s main political backer has just been sent to jail. Read more from Bloomberg News.

U.S. Blacklists China’s Hikvision: The Trump administration has placed eight Chinese technology companies on a U.S. blacklist on Monday, accusing them of being implicated in human rights violations against Muslim minorities in China’s far-western province of Xinjiang. The companies include two video surveillance companies—Hangzhou Hikvision Digital Technology Co. and Zhejiang Dahua Technology Co.—that by some accounts control as much as a third of the global market for video surveillance and have cameras all over the world. The move came the same day U.S. and Chinese negotiators began preparations for high-level talks due to begin on Thursday in Washington. Read more from Shawn Donnan and Jenny Leonard.

China signaled it would hit back with foreign ministry spokesman Geng Shuang telling reporters today to “stay tuned.” He also denied that the government abused human rights in the far west region of Xinjiang. “We urge the U.S. side to immediately correct its mistake, withdraw the relevant decision and stop interfering in China’s internal affairs,” Geng said in Beijing. “China will continue to take firm and forceful measures to resolutely safeguard national sovereignty, security and development interests.” Read more.

China Halts NBA Broadcasts Over Hong Kong Tweet: China’s state TV network CCTV said today that it would halt broadcasts of the National Basketball Association’s games as a backlash intensified against the U.S. league over a tweet that expressed support for Hong Kong’s pro-democracy protesters. The NBA is under pressure after the tweet Friday by Daryl Morey, general manager of the Houston Rockets, sparked fury from supporters of the communist government, casting a shadow over one of China’s favorite teams. While the tweet was quickly deleted, it incited anger in China which broadened rapidly beyond the Rockets to encompass the entire league after NBA Commissioner Adam Silver defended Morey’s right to freedom of expression. Read more from Rachel Chang and Iain Marlow.

U.S., Japan Sign Limited Deal: The U.S. and Japan signed a limited trade deal intended to boost markets for American farmers and give Tokyo assurances, for now, that Trump won’t impose tariffs on auto imports. The deals on agriculture and digital trade cover about $55 billion worth of commerce between the world’s largest- and third-biggest economies, U.S. Trade Representative Robert Lighthizer said at a ceremony in the Oval Office alongside Trump. The accord is a “game changer for our farmers” and ranchers, Trump said at the event. Read more from Justin Sink, Jennifer A. Dlouhy and Brendan Murray.

Nominations: Trump plans to nominate Brian Montgomery, currently commissioner of the Federal Housing Administration, to be a deputy secretary at the Department of Housing and Urban Development, the White House said in a statement, Chelsea Mes reports.

Trump to also nominated Thomas Chapman to be a member of the National Transportation Safety Board. Chapman is currently the minority counsel for the Senate Commerce, Science and Transportation Subcommittee on Aviation and Space, and had previously worked in government affairs for US Airways.

State AGs Meet With DOJ Officials on Facebook: New York Attorney General Letitia James met with top antitrust officials in Washington yesterday to discuss a multistate antitrust probe she is leading into Facebook. James and a bipartisan group of state attorneys general met with key officials at the Justice Department and the Federal Trade Commission, James said in a statement. Both agencies are also investigating the social media giant. “We are concerned that Facebook’s actions may have put consumer data at risk of data breaches, reduced the quality of consumers’ choices, and increased the price of advertising, so we will continue to work in a bipartisan manner to protect consumers and protect competition,” James said. Read more from Naomi Nix, Chris Strohm and Erik Larson.

U.S. Deficit Hits $984 Billion: The federal deficit was $984 billion in fiscal 2019, the highest figure since fiscal 2012, according to a Congressional Budget Office estimate. The deficit was 4.7% of GDP, compared to 3.9% in fiscal 2018, Jack Fizpatrick reports. The projection came in the CBO’s monthly budget report for September, the last month of fiscal 2019. The monthly CBO estimates are usually within a few billion dollars of the official number, which will be released by the Treasury Department later this month.

Economists Worry of MMT Prominence: U.S. budget deficits and the national debt are on track to keep growing because both Trump and Democratic rivals want to use low interest rates to finance more spending—in effect embracing some form of Modern Monetary Theory, business economists said at a debate on the topic yesterday. Conservatives and centrist Democrats argued in support of fiscal discipline for years by saying it would crowd out private spending, “and they used the threat of higher interest rates as the scary boogeyman,” said Julia Coronado, president of MacroPolicy Perspectives, at a meeting organized by the National Association for Business Economics in Denver, Steve Matthews reports.

Ethanol Package Said ‘Close to 16 Billion’ Gallons: Trump said the package announced by his administration last week to boost grain-based biofuel will approach 16 billion gallons of ethanol demand once it’s finalized. Trump spoke about the ethanol agreement yesterday at a press conference. “We’ve come to an agreement, and it’s going to be, I guess, about getting close to 16 billion,” he said. “So, they should like me out in Iowa and all of the different places.” The Environmental Protection Agency and Agriculture Department last week outlined ste ps to aid grain-based biofuel, committing to boost blending-quotas to account for small refinery exemptions. Read more from Mario Parker and Jennifer A. Dlouhy.