President Donald Trump has consistently rejected a growing number of forecasts that his trade war with China and slowing global growth are pitching the U.S. economy toward recession. But he’s also spending a lot of time outlining policies to stave it off.

Speaking to reporters yesterday in the Oval Office, Trump said he’s open to a range of possible actions, including a payroll tax cut or bypassing Congress to reduce taxes by indexing capital gains. He repeated his demand that the Federal Reserve slash interest rates to bolster the economy. Yet he also suggested those actions aren’t necessary.

His comments yesterday illustrate the balance the White House is trying to strike between touting growth under his administration and laying the groundwork for possible fiscal stimulus if the economy falters.

With the 2020 campaign heating up, the growing odds of an economic contraction threaten to crush Trump’s hopes for a second term. Chances of a recession within the next year have risen to 35%, according to an August survey of economists by Bloomberg News.

Trump also defended his trade war with China—a dispute economists point to as a primary risk for global economic growth. He called any short-term pain the U.S. has to pay from the trade war “irrelevant.”

“My life would be a lot easier if I hadn’t taken China on,” Trump said. “But I like doing it because I have to do it.”

For Trump, the economy may be even more important than for his predecessors. His low-40s approval rating is already perilous for an incumbent, and the economy is the main factor keeping him afloat. He scores poorly on most other policy issues and on questions of leadership and character. Read more from Jordan Fabian and Laura Davison. 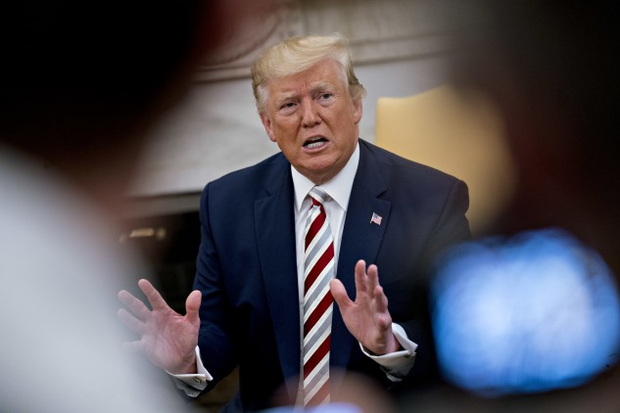 Photographer: Andrew Harrer/Bloomberg
Trump at the White House on Tuesday.

Economic Leaders Debate Stimulus: Meanwhile, the leaders of the world economy will convene this week 8,000 kilometers apart with the same thing on their mind: What more stimulus do they need to support the weakest global growth since the financial crisis?

Central bankers including Federal Reserve Chairman Jerome Powell will be in Jackson Hole, Wyo., from tomorrow through Saturday, while Group of Seven leaders, with Trump among them, will hold talks in the French resort of Biarritz over the weekend and Monday. At the heart of the debate in both locations will be an economic outlook dimmed by the U.S.-China trade war and unnerving financial markets, with investors diving into the perceived safety of the dollar and still-positive yields on U.S. Treasuries. Read more from Piotr Skolimowski.

Collins Feels Hardest Trump-Era Blowback: Sen. Susan Collins (R-Maine) is caught in the cross-fire of the angry partisan division that’s defining the nation’s politics, turning her from a shoo-in for re-election into one of the most vulnerable senators running in 2020. After spending four terms building a bipartisan brand in her home state of Maine, Collins has stoked anger from Democrats for her votes in favor of Trump’s tax cuts and his Supreme Court pick of Brett Kavanaugh, and from Republicans for helping save Obamacare and her frequent criticism of the president’s statements and behavior.

Collins’s once sky-high approval ratings have plunged more than any other senator in the Trump era, and last week the nonpartisan Cook Political Report put her Senate seat—one of just two in GOP hands in states won by Hillary Clinton and being contested in 2020—in the toss-up category. The question for Collins is whether the power of incumbency and her reputation for bipartisanship can overcome a fierce Trump-era backlash. Read more from Steven T. Dennis.

DNC Raises Far Less Cash Than GOP in July: The Democratic National Committee raised $7.75 million in July and ended the month with $9 million in the bank, far behind its GOP counterpart, its latest filing with the Federal Election Commission shows. The Republican National Committee earlier reported raising $20.8 million, and has $46.6 million cash on hand. The party holding the White House usually has an advantage raising money, especially when the opposition has a contested primary contest. The DNC has raised $51.6 million so far in 201 9, compared to $117.9 million for the GOP. Read more from Bill Allison.

Migrant Child Detention Rule to Be Released: A final rule that would allow immigration agencies to hold families in detention longer than current standards while awaiting their court proceedings is slated to be unveiled today by the departments of Homeland Security and Health and Human Services, a Customs and Border Protection official said in an interview. The rule, first proposed last September, would replace the Flores Settlement Agreement, a legal pact that has set standards for how migrant children are held in custody since 1997.

The Trump administration has said the rule is needed to be able to detain families together instead of releasing or separating them, as well as deterring migrant adults from crossing the border with a child knowing they can’t be held longer than approximately 20 days, the current standard for children. Read more from Michaela Ross.

Drug Pricing Czar Takes Reins: For the Trump team’s new drug czar, John Brooks, returning to the HHS Office of the Secretary is a culmination of his experience in the administration. After stints in the HHS, Centers for Medicare & Medicaid Services, and White House, Brooks recently took the reins as administration’s top drug pricing official. As the Trump team shifts its efforts to lower the cost of prescription drug prices to Congress, his experiences may tie that work together. “I think the secretary and the president have been clear that all options are on the table, and I think that has been true since the beginning and remains true now,” Brooks told Bloomberg Law in an interview.

As the Trump administration’s third drug pricing czar, Brooks takes over as the focus shifts from administrative actions to Congress. Read more from Madison Alder.

Space Command to Begin Work Next Week: The Pentagon will officially inaugurate the new U.S. Space Command during a ceremony on Aug. 29, Gen. Joseph Dunford, the chairman of the Joint Chiefs of Staff, said yesterday. The warfighting command led by Air Force Gen. John Raymond, who was confirmed by the Senate in June, will aid the military in missile tracking and space operations to counter growing threats from Russia and China. The Pentagon plans for it to work in tandem with the higher-profile Space Force, a new military service the Trump administration proposed to Congress that will train and equip troops focused on space. Read more from Travis J. Tritten.

USDA Cuts Buyout Amount to Researchers Declining to Move: The buyout for Agriculture Department researchers deciding not to transfer when their agencies are moved to Kansas City has been cut by 60% from the original estimated payment promised, according an employee union. Employees are now being told they will only be getting $10,000 if they choose to take the USDA’s Voluntary Separation Incentive Payment, down from $25,000, according to a document obtained by the union. The document says the response whether to take the payment or not has to be received by Aug. 26. Read more from Teaganne Finn.

EPA’s Drug Waste Rule Risks: The EPA’s effort to simplify pharmaceutical waste management could unintentionally obscure the hazards that the waste poses to companies accepting expired and returned drugs for disposal. The EPA is working to reduce the amount of hazardous pharmaceuticals that end up in water bodies by regulating the industries that handle them. A new regulation that goes into effect today affects health-care facilities, retail stores, and reverse distributors that handle pharmaceuticals that qualify as hazardous waste. Read more from Sylvia Carignan.

Trump Snubs Danish Queen, Cancels State Visit: Trump canceled a state visit to Denmark after his offer to buy Greenland was met first with bemusement, then flat refusal. Anger followed, and even Queen Margrethe II was drawn into the fray. Trump had been due to make his first visit to Denmark, a founding member of NATO and a U.S. ally in the Iraq war, on Sept. 2-3. A series of reports last week indicated he wanted to purchase Greenland, the world’s biggest island and site of a strategic American base. The island is part of the Kingdom of Denmark, though it has extensive home rule.

A leading member of the Danish government bloc on Wednesday morning called Trump’s behavior “hopeless,” while a former prime minister said the decision was “deeply insulting” to the people of Denmark and asked whether the whole exercise had been a joke. The queen weighed in, noting through a spokeswoman that the U.S. president’s decision to snub her invitation in a tweet came as a surprise. Read more from Morten Buttler and Nick Rigillo.

Hong Kong Protests Enter Crucial Period: For all the tumult Hong Kong has seen since pro-democracy protests erupted in early June, the countdown to a crucial anniversary for China on Oct. 1 makes the next six weeks particularly sensitive. The 70th anniversary of the People’s Republic of China, the name used by Communist Party leaders after they forced Chiang Kai-shek’s regime to retreat to Taiwan, will feature a military parade through Beijing personally inspected by President Xi Jinping. That has raised some fears that Xi will seek t o get Hong Kong under control by then to avoid any violence that steals headlines. Read more from Iain Marlow and Sheryl Tian Tong Lee.

Meanwhile, Senate Majority Leader Mitch McConnell (R-Ky.), author of a law that extended special privileges to Hong Kong, wrote in a Wall Street Journal op-ed that Beijing “must know the Senate will reconsider that special relationship, among other steps, if Hong Kong’s autonomy is eroded.” McConnell wrote that Hong Kong is a “cautionary tale” about how China treats areas in its envisioned sphere of influence and “disregards international agreements that govern them.”

In addition to the possible reconsideration of Hong Kong’s status, McConnell said the Senate will examine Beijing actions in Hong Kong, including efforts to expand influence and surveillance across China and beyond. The Senate will also fund democracy and human rights programs across Asia and prioritize funding for U.S. military rebuilding and modernization to “keep pace” with China as a “major competitor.”

Also on the protests, Twitter removed hundreds of accounts linked to the Chinese government this week meant to undermine the legitimacy of the Hong Kong demonstrations. It also said it would no longer allow state media to purchase ads on its platform. What Twitter didn’t mention in its series of blog posts this week was the increasing number of Chinese officials, diplomats, media, and government agencies using the social media service to push Beijing’s political agenda abroad. Read more from Shelly Banjo and Sarah Frier.

U.S.-Venezuela Talks on Maduro’s Departure: U.S. talks with Venezuela will be about President Nicolas Maduro’s departure, National Security Adviser John Bolton tweeted today. “As the President has repeatedly stated, to end the pilfering of the Venezuelan people’s resources and continued repression, Maduro must go,” Bolton wrote. “The only items discussed by those who are reaching out behind Maduro’s back are his departure and free and fair elections.”

Serbia Urged to Renew Efforts for Kosovo Deal: The U.S. urged Serbia to resume talks with Kosovo and seek an agreement that would lead to the countries’ mutual recognition, a prospect the biggest former Yugoslav republic has long rejected. The Balkan neighbors are locked in a dispute over mending ties—a goal that both sides need if they want to progress with their plans of joining the European Union. Secretary of State Mike Pompeo urged Serbian President Aleksandar Vucic at a meeting in New York this week to try to find a way forward. Read more from Gordana Filipovic.

To contact the editor responsible for this story: Brandon Lee at blee@bgov.com