Trump wants Danielle J. Hunsaker on the U.S. Court of Appeals for the Ninth Circuit. That’s the West Coast-based court that the administration has lambasted for thwarting its immigration policies. Hunsaker is an Oregon state court judge. On the East Coast, William J. Nardini is Trump’s pick for the U.S. Court of Appeals for the Second Circuit, which covers states including New York. Nardini is a federal prosecutor in Connecticut, another state that falls under the Second Circuit’s jurisdiction. Nardini clerked for retired Justice Sandra Day O’Connor.

The Nardini nod, along with another pending Second Circuit nomination, gets Trump one step closer to “flipping” that circuit to a majority of Republican-appointees. Read more from Jordan S. Rubin. 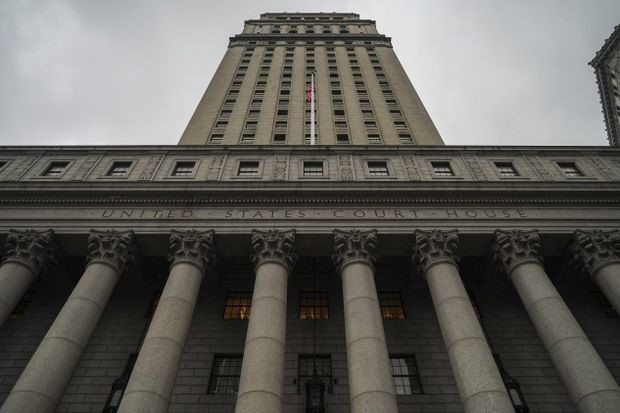 Industry Urges Congress to Stop Infrastructure Cut: More than 30 business, transportation, and government groups are pushing Congress to use a must-pass spending measure to stop $7.6 billion in federal highway funds from being rescinded during the height of next summer’s construction season. The rescissions were included in the 2015 surface transportation law to reduce the budgetary baseline for highway programs. The provisions, which were inserted at the request of then-Speaker Paul Ryan (R-Wis.), would block the use of funds for projects ranging from interstate maintenance to bridge rehabilitation in all 50 states.

“If this doesn’t get fixed, it eliminates the ability of states to tap into $7.6 billion in highway funds and that was not something the states planned on,” Ed Mortimer, the U.S. Chamber of Commerce’s vice president for transportation and infrastructure, said in an interview. Read more from Nancy Ognanovich.

Paul Prepares Health Insurance Measure: Sen. Rand Paul (R-Ky.) is readying legislation meant to revive a court-blocked effort to expand cheaper insurance options than what’s offered in Obamacare markets, according to two industry sources. The legislation in some ways mirrors Department of Labor rules around association health plans, which let businesses and individuals band together to create group health plans that offer less expensive coverage but have fewer protections than plans that must comply with Affordable Care Act rules.

A Washington judge in March blocked the Labor rules expanding the availability of AHPs. Paul’s bill, researchers say, appears to go even further by establishing few rules around benefit designs for such plans.

Tillis Seeks Hearing on Federal Reserve: Senate Banking Committee Republican Thom Tillis (R-N.C.) called for the panel to hold a hearing on what he termed the danger that the Federal Reserve will meddle in the 2020 presidential election, a day after a former top central bank official suggested that the Fed resist interest-rate cuts that would aid Trump. Tillis said yesterday that he was “very disappointed” that New York Fed President Bill Dudley appeared to be “lobbying the Fed to use its authority as a political weapon against President Trump,” according to a statement. “The president is standing up for America against China after 30 years of our country and our workers being ripped off and there is now an effort to get the Fed to try to sabotage the president’s efforts,” Tillis said. Read more from Rich Miller and Christopher Condon.

Trump Pitch for G-7 at Doral Draws Democrat Probe: Trump’s pitch for his Doral golf resort in Miami as the site for next year’s G-7 summit of world leaders will be probed as part of the House Judiciary Committee’s inquiry into potential impeachment articles. “The committee will broaden its ongoing investigation to include these latest revelations and will take further investigative steps, including scheduling hearings and requesting additional documents from the White House,” Judiciary Chairman Jerrold Nadler (D-N.Y.) said in a statement yesterday.

Nadler said holding the summit at the president’s resort would violate the Constitution’s ban on any foreign “emolument” to a president. He said it would reflect “perhaps the first publicly known instance in which foreign governments would be required to pay President Trump’s private businesses in order to conduct business with the United States.” Read more from Billy House.

Gillibrand Drops Out of Presidential Contest: Sen. Kirsten Gillibrand (D-N.Y.) is ending her campaign for the Democratic presidential nomination after failing to qualify for the third debate. “Today, I am ending my campaign for president,” she tweeted. “I think it’s important to know how you can best serve,” adding that her supporters should “go beat Donald Trump.”

Gillibrand launched her campaign with a focus on women’s issues. She rode the momentum of the #MeToo Movement that brought women to the polls in the 2018 midterms. But in a presidential field containing the most female candidates ever, her pitch didn’t catch on, and by the time she began embracing broader issues like campaign finance reform she had trouble finding her lane. Read more from Emma Kinery.

Harris Offers Plan for People With Disabilities: Sen. Kamala Harris (D-Calif.) promises to increase grants and strengthen rules aimed at bolstering opportunity for people with disabilities if she’s elected president in 2020. Her campaign said that a Harris proposal released today would enhance Department of Education programs aimed at helping disabled people get jobs. It would also use the powers of the departments of Transportation and Housing and Urban Development to strengthen accessibility rules for new projects to qualify for funding. The proposal says Har ris, California’s junior senator, would “have diverse leaders with disabilities developing all the policies her administration champions.” Read more from Sahil Kapur.

Trump Tightens Policy on Children Born Overseas: The Trump administration said children adopted overseas by U.S. military personnel and government employees serving abroad will no longer be guaranteed citizenship. A “policy manual update” issued yesterday by the U.S. Citizenship and Immigration Services also would affect the children born to non-citizen government employees before they are naturalized. The new policy means that some members of the military and government employees would no longer be able to automatically pass on their citizens hip to their foreign-born children if they themselves haven’t lived in the U.S. for a specified amount of time. Read more from Polly Mosendz and Michaela Ross.

Mnuchin Eyes 100-Year Debt: The Trump administration is giving careful thought to selling something Wall Street may not be ready to buy: ultra-long debt. Treasury Secretary Steven Mnuchin said that offering bonds with maturities of 50 to 100 years is under “very serious consideration,” with officials conducting an intensive review. “If the conditions are right, then I would anticipate we’ll take advantage of long-term borrowing and execute on that,” Mnuchin said yesterday in an interview with Bloomberg News in Washington.

Record-low interest rates make this an opportune time for the Treasury to revisit a proposal it’s shelved in the past. Some observers see a window for the U.S. to issue extremely long-term debt instruments, yet some investors have been bruised by long bonds recently, and the idea has been met repeatedly with a cool reception on Wall Street. Read more from Saleha Mohsin.

EPA to Propose Retreat on Methane Rules: The Environmental Protection Agency is set to unveil a proposal that would step back from federal regulation specifically targeting methane emissions at oil and gas facilities, potentially staving off requirements for a million existing U.S. wells. A White House review of the proposal has been concluded, setting the stage for today’s announcement, according to people familiar with the matter who asked not to be named before the decision has been made public. Read more from Jennifer A. Dlouhy.

China Indicates it Won’t Retaliate on Tariffs: China indicated that it wouldn’t immediately retaliate against the latest U.S. tariff increase announced by Trump last week, emphasizing the need to discuss ways to deescalate the trade war between the world’s two largest economies. “China has ample means for retaliation, but thinks the question that should be discussed now is about removing the new tariffs to prevent escalation of the trade war,” Ministry of Commerce spokesman Gao Feng told reporters in Beijing today. “China is lodging solemn representations with the U.S. on the matter.”

When asked if that meant China wouldn’t retaliate at all for the latest escalation by the U.S., Gao didn’t elaborate but repeated the same comments. China has hit back against each previous tariff increase by the U.S., so not responding in kind this time may signal a change in strategy.

Meanwhile, Mnuchin said U.S. trade officials expect Chinese negotiators to visit Washington, but wouldn’t say whether a previously planned September meeting would take place. “We continue to have conversations. We’re planning for them to come,” Mnuchin said yesterday in an interview, declining to say whether the September encounter would happen, Saleha Mohsin reports.

Hurricane Dorian Slips Past Puerto Rico, Heads to Florida: Hurricane Dorian is set to become a major hurricane in the next couple of days, gathering force as it heads toward Florida’s east coast, where it may bring 115 mile-per-hour winds and drenching rain when it hits there sometime early next week. It would be the first major hurricane to slam into Florida’s east coast in 15 years. The storm reached St. Croix and St. Thomas in the U.S. Virgin Islands yesterday afternoon, according to the U.S. National Hurricane Center in Miami, and is expected to stay over the water, gaining strength in its northwest march toward Florida. Read more from Brian K. Sullivan, Will Wade and Marvin G. Perez.

Esper Rules Out Relenting If Turkey Keeps Missile System: Defense Secretary Mark Esper ruled out any compromise that would let Turkey get American F-35 fighter jets if it keeps the Russian-made S-400 missile defense system. “I’ve been very clear in both my public comments and privately with my Turkish counterpart,” Esper told reporters in Washington yesterday. “It’s either the F-35 or the S-400. It’s not both. It’s not park one in the garage and roll the other one out. It’s one or the other.” Read more from Glen Carey.

South Korea, U.S. Spar on Intel Pact: Esper urged Japan and South Korea to end their escalating feud, in the latest indication that the Trump administration was concerned that the spat was damaging America’s regional alliance network. Esper said yesterday he was disappointed in the dispute, shortly after his top aide for the region, Randall Schriver, warned that South Korea’s decision last week to withdraw from an intelligence sharing pact threatened U.S. security interests. The administration issued the unusually blunt rebuke, even though the South Korean government had earlier in the day urged the U.S. to tone down its criticism. Read more from Glen Carey and Shinhye Kang.

China Warns U.S. Warship: China warned a U.S. warship sailing near disputed islands in the South China Sea that it was violating the country’s sovereignty and urged Washington to halt its “provocative” naval operations. The People’s Liberation Army identified and conducted surveillance of the USS Wayne E. Meyer, a guided-missile destroyer, on Aug. 28 before warning it to leave, according to a post on the PLA southern command’s WeChat account. Read more from Iain Marlow and Sheryl Tian Tong Lee.