Rep. Dean Phillips has a message for his House Democratic colleagues and the party’s presidential candidates: slow down on impeachment, stop sniping on Twitter and cut some deals with Republicans to get things done.

Last November, Phillips became the first Democrat elected to the U.S. House in Minnesota’s 3rd Congressional district in 60 years. He was one of 40 Democrats who won formerly GOP-held seats, and holding on to them is central to the party’s 2020 election strategy.

Treating himself to soft-serve ice-cream this month at a branch of the Penny’s coffee shop chain he co-owns in the suburbs of Minneapolis-St. Paul, Phillips said he didn’t get to Congress by being a “rabble-rouser.”

“I’m hearing from people questions about what’s been achieved, and I realized that impeachment, trade wars, the racist tweets, they command these news cycles,” Phillips said.

Phillips’s district abuts that of Rep. Ilhan Omar (D-Minn.), who along with Reps. Alexandria Ocasio-Cortez (D-N.Y.) and Rashida Tlaib (D-Mich.) has been a regular target of President Donald Trump. The president ignited a firestorm yesterday, successfully urging Israel to prohibit Omar and Tlaib from entering the country, and saying they “hate Israel & all Jewish people.”

Despite all the focus Trump gives to the vocal progressives, they aren’t setting the agenda for House Democrats. That’s being done by voters in states like Minnesota and Michigan, Wisconsin and Pennsylvania who elected candidates like Phillips in 2018 and will be pivotal in 2020.

The political realities for Democrats elected in those areas explains Speaker Nancy Pelosi’s (D-Calif.) cautious approach to topics such as impeaching Trump, Medicare for All, the Green New Deal and gun control. It also illustrates the intra-party struggle. Read more from Erik Wasson. 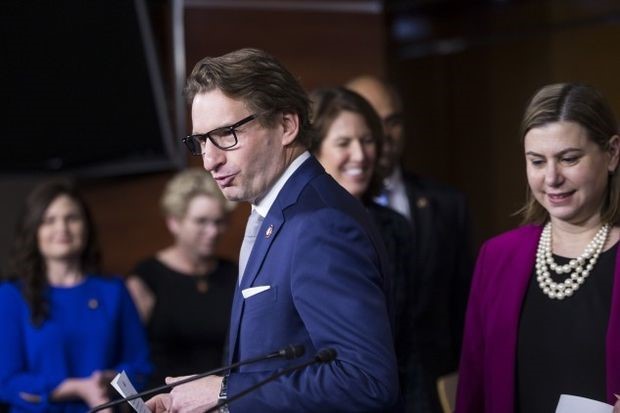 Israel Allows Tlaib to Make Humanitarian Visit: Israel will allow Tlaib to visit her family on a humanitarian trip, the country’s interior minister said in a statement today. A day earlier, Israel said it would bar Tlaib and her fellow Muslim lawmaker Omar from beginning an official visit from this weekend because of their support for a boycott of the country. The permission allows Tlaib to meet her 90-year-old grandmother in the West Bank, the country’s interior minister said in a statement, adding that the lawmaker agreed in a letter not to restate her support for a boycott of Israel during the visit. That was a condition laid out by Prime Minister Benjamin Netanyahu, a firm Trump ally. Read more from Ivan Levingston.

Lawmakers Far Apart on Privacy Bill: Lawmakers haven’t coalesced around a single approach to broad data privacy legislation in either the Senate or House, despite pressure from tech companies, privacy advocates and others to pass a bill. Momentum in both chambers has dissipated, even after a series of high-profile data breaches and privacy scandals involving Equifax, Facebook and other companies. Business groups are urging Congress to act to blunt the stringent California Consumer Privacy Act, which takes effect Jan. 1. It’s unclear whether compromise legislation will start to move in either chamber before the end of the year. Read more from Daniel R. Stoller.

Warren Moves Ahead of Sanders: Sen. Elizabeth Warren (D-Mass.) has 20% support ahead of Sen. Bernie Sanders (I-Vt.) at 10%, propelling her into second place behind former Vice President Joe Biden at 31%, according to the latest Fox News poll of Democratic primary voters. Sen. Kamala Harris (D-Calif.) is in fourth place with 8% support. Biden and Harris are in the same position as a March poll. Warren has gained 16 percentage points since then, while Sanders has dropped 13 points, the Fox poll found.

O’Rourke Says He Won’t Run For Senate: Former Rep. Beto O’Rourke (D-Texas) said last night that he won’t run for Senate “in any scenario,” despite calls from Democrats to drop out of the presidential race to try to unseat Sen. John Cornyn (R-Texas). “I’m running for this country. I’m taking this fight directly to Donald Trump and that is what I am exclusively focused on doing right now,” O’Rourke said. “When it comes to the Texas Senate race, there are seven extraordinary candidates running right now, any one of whom would be far better than John Cornyn, and every one of whom stands every chance of being able to beat him,” O’Rourke said. Read more from Chelsea Mes.

Trump Says Lewandowski Would Be Tough to Beat: Trump at a rally in New Hampshire yesterday said his former campaign manager, Corey Lewandowski, “loves your state” and would be “tough to beat.” Lewandowski has signaled an interest in running for Sen. Jeanne Shaheen’s (D-N.H.) Senate seat. “I’m hearing he’s thinking about running for the Senate from New Hampshire,” Trump said. “He’s going to do a job if he does do it, so we’ll see what happens.” Republicans view Shaheen as potentially vulnerable because of her competitive re-election in 2014. Trump lost New Hampshire to Hillary Clinton in 2016 by a margin of just 2,736 votes, Chelsea Mes and Kim Chipman report.

Train Attack Foiler Seeks to Unseat DeFazio: Alek Skarlatos, a military veteran who helped thwart a gunman while aboard a Paris-bound train in 2015, has filed papers with Federal Election Commission to seek the Republican nomination in Oregon’s 4th Congressional District in 2020. That seat is currently held by House Transportation and Infrastructure Chairman Peter DeFazio (D), who’s been in Congress since 1987. The district includes Eugene, Springfield, Corvallis, Roseburg and was nearly evenly split between Hillary Clinton and Trump. Read more from Greg Giroux.

Trump Shows Interest in Buying Greenland: Trump reportedly wants to buy Greenland, the world’s biggest island. Denmark, unsure whether the former property developer is joking, isn’t selling. A Wall Street Journal report outlining the U.S. president’s apparent interest in striking a deal has left Danes bewildered, with a former prime minister asking whether it was a joke. Another prominent opposition member said the report indicates that Trump is “insane,” while a member of the government bloc called it a “terrible idea.” But according to the Wall Street Journal, which cites people familiar with the deliberations, Trump has repeatedly expressed interest in striking a deal to purchase the island, and even asked his White House counsel to explore the idea. Read more from Christian Wienberg and Morten Buttler.

North Korea Testing Missiles Faster: North Korea fired two more ballistic missiles into its eastern sea—the sixth such volleys in three weeks—extending the regime’s most prolific run of tests since Trump took office. The weapons, which were likely short-range ballistic missiles, were launched from the Tongchon region in the southeastern province of Kangwon on Friday and traveled 140 miles, South Korea’s defense ministry said. The test appeared consistent with Kim Jong Un’s push to demonstrate the ability to strike all of South Korea and parts of Japan with new hard-to-intercept missiles. Read more from Jihye Lee.

U.S. Threatens Sanctions Over Iran Tanker: The U.S. is gravely disappointed with the U.K. after a Gibraltar court allowed the release of an Iranian oil tanker suspected of hauling oil to Syria, and threatened sanctions against ports, banks and anyone else who does business with the ship or its crew, two White House officials said. The court’s decision yesterday to release the Grace 1 was a missed opportunity and the Trump administration hopes that the U.K. government and authorities in Gibraltar will reconsider, according to the officials. They said that the court order rewards Iran’s terrorism and Tehran will interpret the action as appeasement.

The Grace 1 had been held in Gibraltar after British forces seized it last month on suspicion that it was hauling Iranian crude oil to Syria. The U.S. Department of Justice is seeking to block the vessel’s release, but Gibraltar’s Supreme Court yesterday said American authorities didn’t file the appropriate legal application. Both White House officials said the Grace 1 should now be considered a pariah. Anyone that does business with the ship, crew or owners, or provides financial transactions or port services to the ship, could be liable for evading American sanctions, the officials said. Read more from Jonathan Browning, Alex Longley and Nick Wadhams.

Trump Attacks May Put Judges at Risk: Attacks on courts by Trump and others may undermine faith in the judiciary and could place judges at risk, the Boston Bar Association said. A new report released by the group yesterday cited troubling examples of commentary linked to the president, his administration, the judicial confirmation process, and media. It called on other bar associations and attorneys to defend judicial independence in the face of conduct that they say exceeds “caustic criticism.”

“While criticism of judicial decisions is to be expected, personal attacks and language that politicizes or otherwise casts doubt on the judicial branch as a whole has the potential to cause significant damage to our democracy,” the association said in a statement accompanying the report. Moreover, personal attacks on judges also may result in “intimidation, harassment, or threats to their safety or the safety of their families,” the group said in the report. Aaron Nicodemus has more.

Trump Concerned a Downturn Threatens Re-Election: Trump is much more concerned about an economic downturn than his top advisers and has called business leaders and financial executives to sound them out, The Washington Post reports, citing two people familiar with the discussions. Amid volatility in the stock market and economic slowdowns in other countries, officials in the White House, the Treasury Department and the administration aren’t planning steps to fend off a recession because they don’t believe one will occur and say that making such plans would validate a negative narrative.

Democrats Blast ‘Harmful’ LBGT, Abortion Rule: A new proposal to eliminate protections for LGBT individuals and people with limited English skills under the Affordable Care Act must be withdrawn, House Democrats said, echoing states and patient groups. The rule is “harmful” and “destructive effort” by the Health and Human Services Department and the White House that undermines health-care access that Obamacare was designed to protect, the three leading House Democrats said in a letter to Secretary Alex Azar, Madison Alder reports.

TopMedical Group Leave Anti-Medicare-for-All Coalition: The American Medical Association has decided to leave the anti-Medicare for All coalition the Partnership for America’s Health Care Future. An AMA spokesman confirmed the group won’t provide funding for the group, which was started in part by the AMA, the American Hospital Association and America’s Health Insurance Plans to oppose any efforts to create a single payer health system in the U.S. The AMA’s logo has been removed from the group’s website too. The AMA spokesman said the group is focus ed on advocating for ways to build on the Affordable Care Act, Alex Ruoff reports.

To contact the reporter on this story: Brandon Lee in Washington at blee@bgov.com

To contact the editors responsible for this story: Zachary Sherwood at zsherwood@bgov.com; Loren Duggan at lduggan@bgov.com