Donald Trump’s attempts to pressure Ukraine will be scrutinized in a historic public forum Wednesday as the House opens impeachment hearings that will pit him against Intelligence Chairman Adam Schiff, who is tasked with making the case to remove the president from office.

Trump has so far been able to count on the support of fellow Republicans, who seem unlikely to vote to remove him from office if the question reaches the Senate. But the public hearings set off a process that is almost certain to make Trump the third president ever to be impeached, a development that could reshape his presidency, as well as the 2020 election.

Schiff, who has been a frequent target of attacks from Trump and his Republican allies, will be trying to keep the proceedings from devolving into a partisan shouting match, while also avoiding any missteps that could fuel charges of bias.

Today’s inaugural hearing is scheduled to begin at 10 a.m. with Schiff and Rep. Devin Nunes (R-Calif.), the panel’s ranking member, delivering opening statements. Schiff will lead off questioning of the witnesses, William Taylor Jr., the acting ambassador to Ukraine, and George Kent, deputy assistant secretary of the State Department for European and Eurasian affairs.

Schiff has sought to button-down potential partisan disruptions with a crisp set of rules that gives his party the advantage of a full 45 minutes to question the two veteran diplomats, before turning the microphone over to Nunes, a close Trump ally. Both are expected to delegate significant portions of questioning to staff members. 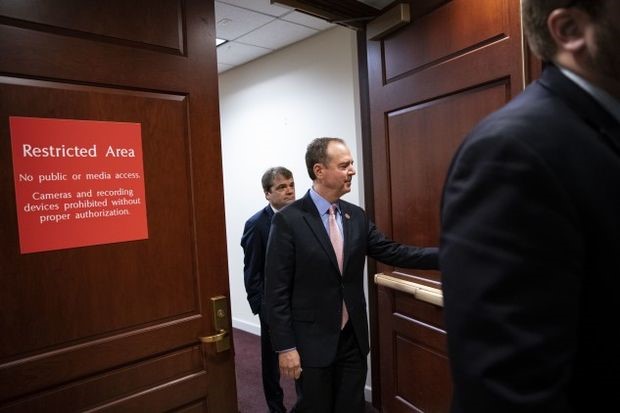 Timing of Public Hearings: Schiff announced that eight more witnesses will appear before his committee next week, John Harney reports.

Punting Shutdown Deadline: Congress plans to extend government funding through Dec. 20, averting a shutdown risk next week but setting up a potential spending fight amid likely impeachment votes by year’s end, according to aides and lawmakers yesterday. Senate Appropriations Chairman Richard Shelby (R-Ala.) and House Appropriations Chairwoman Nita Lowey (D-N.Y.) settled on the timing for a short-term measure in a meeting yesterday. “It appears that it will be Dec. 20,” Lowey said after the meeting. The House will vote on the stopgap next week before funds run out Nov. 21, House Majority Leader Steny Hoyer (D-Md.) said. Read more from Erik Wasson.

Wolf Moves to Senate Vote: The Senate voted yesterday to limit debate on the nomination of Chad Wolf to be undersecretary of strategy, policy and plans at the Homeland Security Department, setting up a vote today to confirm him to the job and eventually to lead the department. Trump plans to elevate Wolf to serve as acting secretary of the department following the resignation of Kevin McAleenan in October, the White House said Nov. 1. Laws governing federal vacancies have complicated filling the position and limited Trump’s ability to pick immigration hardliners like U.S. Citizenship and Immigration Services head Ken Cuccinelli to serve as acting secretary. Read more from Michaela Ross.

Powell Is Key for Traders With Impeachment Concerns: Wall Street bond traders will be firmly focused on events in Washington this morning in a hunt for clues about the direction of the economy and risk sentiment. But while they may keep one eye on the first public hearings in the House’s presidential impeachment inquiry, what matters most right now for the $16.5 trillion Treasuries market will be unfolding elsewhere on Capitol Hill: Federal Reserve Chairman Jerome Powell’s appearance before Congress’s Joint Economic Committee.

After policy makers cut rates last month at the third straight meeting, investors are looking for confirmation that Powell sees the economy on solid enough ground to pause in December. Trump weighed in again yesterday in a speech at the Economic Club of New York, slamming the central bank’s shunning of negative interest rates as bad for the U.S. Read more from Katherine Greifeld.

Trump Welcomes Erdogan to White House: Trump will welcome Turkish president Recep Tayyip Erdogan to the White House today, the leaders’ first meeting since a diplomatic clash over Turkey’s military offensive in northern Syria. Trump will be trying to move past the episode in Syria that he helped trigger by pulling U.S. troops out of the region, where they were maintaining peace between Turkey and the American-allied Kurdish forces that helped defeat Islamic State. At the same time, Trump is expected to increase pressure on Erdogan over his decision to purchase a Russian anti-aircraft missile system despite American admonitions.

The meeting comes as Trump faces the first of several public hearings in the House over whether he has abused his power by conducting foreign policy for his personal benefit, meriting impeachment. Turkey has featured in reports related to Trump’s controversial conduct. Before directing an effort to force Ukraine to investigate Trump’s political rivals, Rudy Giuliani — the president’s personal lawyer — lobbied the White House to deport a Turkish dissident Erdogan blames for a failed 2016 coup. Read more from Justin Sink

Erdogan has relied on his rapport with Trump to ward off another round of punishing American sanctions since he put Turkey’s NATO obligations to one side and took delivery of a missile-defense system made by the bloc’s top foe, Russia. But time is now running out as Turkey plans to deploy the S-400 batteries as early as December, and make them fully operational by April 2020, while both Trump administration officials and Congress remain publicly determined to punish Ankara over the missile purchase. Read more from Selcan Hacaoglu.

U.S. Gets Another Shot at Greenland: Three months after Trump’s efforts to buy Greenland were rebuffed, talks targeting the island are being resumed, this time with a focus on investments and security. Secretary of State Mike Pompeo is due to meet with Danish Foreign Minister Jeppe Kofod in Washington, D.C. today to discuss the strategically important Arctic territory. “We want the Arctic to remain a low-tension area so it is very important to have a close cooperation with the U.S. in terms of presence and enforcement,” Kofod said in a phone interview, after confirming the meeting was taking place. Read more from Morten Buttler.

Clinton Says ‘Many’ Urging a Run: Hillary Clinton said yesterday she is being urged by “many, many, many people” to enter the 2020 presidential race and wouldn’t rule out a third White House bid, though she has no plans for a run. “I, as I say, never, never, never say never,” Clinton, the 2016 Democratic nominee, told BBC Radio 5 Live. “I will certainly tell you, I’m under enormous pressure from many, many, many people to think about it.” “But,” she added, “as of this moment, sitting here in this studio talking to you, that is absolutely not in my plans.” Read more from Jennifer Epstein.

Laptop, Phone Searches at Border: Airport and border searches of travelers’ laptops and smartphones face a higher legal hurdle in order to be justified, a federal court ruled yesterday. Privacy groups are hailing the ruling as a win for travelers’ civil rights. The number of devices searched at airports and entry and exit points to the U.S. rose 60% in the first year of the Trump administration, according to data kept by U.S. Customs and Border Protection. The ruling, from the U.S. District Court of Massachusetts, says the agency and Immigration and Customs Enforcement now need “reasonable suspicion” of contraband, such as child pornography, classified material, or counterfeit media, to search a device belonging to a U.S. citizen or lawful resident. Read more from Michaela Ross.

3D-Printed Guns Online: The Trump administration broke a federal law when it reached a settlement allowing a small gun-technology company to post online the digital blueprints for making weapons with a 3D printer, a judge ruled. The State Department didn’t provide the public a proper explanation in 2018 when it reversed an Obama-era position blocking Defense Distributed from publishing computer-aided design files for guns on the internet, U.S. District Judge Robert Lasnik in Seattle ruled yesterday. Read more from Erik Larson.

Environmental Groups Challenge Border Wall: The Sierra Club faced off with government lawyers in court this week to fight the U.S.-Mexico border wall backed by Trump, the latest in a lineup of lawsuits over the issue. Lawyers for the environmental group, as well as for the Southern Border Communities Coalition and some states, appeared at the U.S. Court of Appeals for the Ninth Circuit yesterday to argue against Trump’s emergency order authorizing creative funding for border protections. The president issued the order in February to move money from Defense Department accounts and other sources to fund construction, after Congress declined to authorize $5.7 billion for the project. Read more from Ellen M. Gilmer.