The atmosphere at Buunni Coffee in the Bronx is thick with the aroma of roasted Ethiopian beans and anti-establishment fervor.

The shop is in the Riverdale neighborhood represented for more than 30 years in the House by Rep. Eliot Engel (D-N.Y.), a close ally of Speaker Nancy Pelosi (D-Calif.). Wielding their personal laptops and cell phones, a crew of volunteers mostly in their 20s and 30s is trying to change that.

“Hello, I’m calling on behalf of Jamaal Bowman,” begin most calls from a makeshift phone bank upstairs, introducing a progressive candidate few people in the district have ever heard of. A lot of the connections end abruptly. But occasionally, interest is piqued, and another potential voter’s name is logged for the middle school principal endorsed by Justice Democrats, the progressive activist group that backed Rep. Alexandria Ocasio-Cortez (D-N.Y.) in a neighboring district.

The group is working to repeat Ocasio-Cortez’s stunning 2018 Democratic primary victory over Joe Crowley, who was a member of House leadership and a 20-year incumbent. Energized by that upset, the Justice Democrats have endorsed candidates in Massachusetts, Texas and Ohio to challenge Democratic incumbents they deem too moderate to reflect the progressive energy animating voters in solidly blue districts.

It’s a major 2020 headache for Pelosi. She often reminds her caucus that their House majority depends on defending and flipping swing districts where middle-of-the-road voters are turned off by progressive causes like “Medicare for All” and the “Green New Deal.” 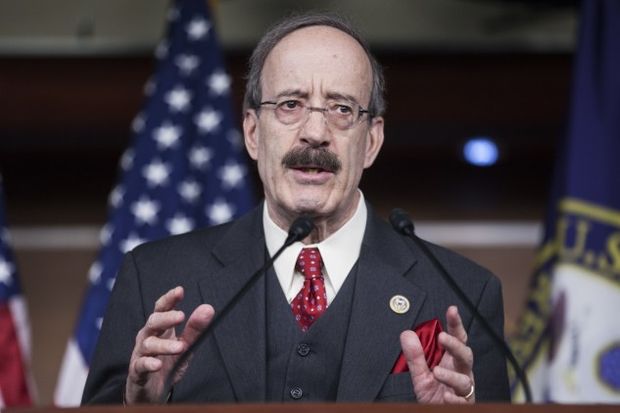 Hickenlooper Runs for Senate: Former Colorado Gov. John Hickenlooper, in a video posted on his website, said he is running as a candidate for the U.S. Senate. Hickenlooper dropped out of the Democratic presidential race last week, saying he was open to entering the race to challenge incumbent Sen. Cory Gardner (R-Colo.).

The Denver Post published a poll this month that showed Hickenlooper with a 51-point lead over two other Democrats in the state’s 2020 Senate race. The race is seen as a must-win for Democrats if they are to win control of the Senate next year.

Inslee Drops Out of Democratic Presidential Contest: Washington Gov. Jay Inslee, who built his campaign around fighting climate change, is dropping out of the race for the Democratic presidential nomination. Inslee, who has lagged in polling and fundraising, told MSNBC’s Rachel Maddow last night that he had decided to withdraw because he determined he couldn’t win the nomination. He didn’t say whether he would seek a third term as governor. “It’s become clear that I’m not going to be carrying the ball. I’m not going to be the president. So I’m withdrawing tonight from the race,” Inslee said on Maddow’s program. Read more from Emma Kinery.

Debate Deadline Looms for Several Democrats: It may be now or never for Democratic candidates who so far haven’t caught on with primary voters and pollsters: They’ve got just one week left to make the cut for the third debate. Of the more than 20 candidates in the battle for the nomination, 10 have qualified to participate in the forum, scheduled to take place Sept. 12 and 13. But if no others meet the requirements by Aug. 28, the event in Houston will be compressed to one night, according to ABC News, the host. If more than 10 candidates end up qualifying, the network will randomly assign the participants to one of the two nights. They will have one minute and 15 seconds to answer questions, and 45 seconds for rebuttals. Read more from Misyrlena Egkolfopoulou.

Big-Money Democrats Pour Millions Into 2020: ActBlue, the online money machine, was designed to fuel Democratic politics through small-dollar donations. But it turns out that chief executive officers, lawyers and other deep-pocketed donors like the convenience of a one-click stop to max out on contributions in the presidential contest. While two-thirds of the money flowing through the platform came from millions of donations in amounts of $200 or less, thousands of contributors used ActBlue to give candidates the maximum amount allowed, Federal Election Commission data shows. That made the organization a conduit for the big donors and bundlers whose influence it says it wants to reduce. Read more from Bill Allison.

Cannabis Going on the Ballot in California: The combination of climate, water and soil that makes Napa Valley Cabernet Sauvignon so popular may also be right for growing cannabis on a large scale, if voters allow commercial marijuana growing. Backers of an initiative to permit pot growing gathered sufficient signatures to place on the March 2020 ballot an initiative that would force the county to permit commercial growing. The Napa County Board of Supervisors, after reviewing a report about permitting commercial pot growing in the famed wine growing region, on Tuesday approved placing the initiative on the ballot. Read more from Joyce E. Cutler.

Coming Up in Congress

House Democrats Prepare Agenda: Speaker Pelosi prepared House Democrats for their return to Washington in September, setting out the party’s agenda in a letter yesterday to colleagues. Democrats will continue to press the Senate to consider two House-passed gun background check measures, and the House Judiciary Committee will return on Sept. 4, a week earlier than other lawmakers, to mark up legislation to “address gun violence and the terrorism of white supremacy,” according to Pelosi’s letter.

The Speaker also reiterated earlier Democratic complains about Trump’s reported plan to rescind some State Department funding, writing that it “violates the good faith of our budget negotiations as it seeks to override the Congress’s most fundamental Constitutional power of the purse and is illegal as stated by the Government Accountability Office.”

Youth Vaping Probe: The largest companies in the e-cigarette industry, including JUUL Labs and Reynolds American, face pressure to fork over details of their business operations under a congressional investigation announced yesterday. Letters from House Energy and Commerce Chairman Frank Pallone (D-N.J.) also demanded the companies turn over sales information and product research they financed or conducted in-house. Pallone was particularly concerned about flavored e-cigarettes and their popularity among teenagers. The letters also raise concerns about the safety of the products.

It’s the latest probe into e-cigarette companies. Other Congress members have asked various vaping companies for marketing information, but Pallone’s inquiry is the broadest yet. Read more from Jacquie Lee.

Mexico, Pompeo to Review Migration: Mexican Foreign Minister Marcelo Ebrard plans to review the progress of the nation’s efforts to stop undocumented migration with U.S. Secretary of State Mike Pompeo during a visit to Washington in early September. Trump in June indefinitely suspended tariffs after Mexico agreed to accept more asylum seekers as they await their U.S. cases and step up border security. The demands came after detentions of people at America’s southern border, most coming from Central America, more than tripled from last year. Read more from Eric Martin.

Alliance Key to Trump Mideast Policy Is Tested: A raging conflict threatening to further splinter Yemen is also casting a shadow over a crucial Arab alliance that has backed Trump’s policy against Iran. Clashes between forces loyal to Yemen’s internationally recognized authorities and a southern separatist group escalated this month. The government has accused the United Arab Emirates of backing the armed rebellion, a charge denied by the Gulf state. The escalation followed a U.A.E. decision to scale back its military presence in Yemen more than four years after joining Saudi Arabia in a war to crush Houthi rebels backed by Iran. The conflict has caused one of the world’s worst humanitarian crises. Read more from Glen Carey.

The statement came during a visit to Seoul by the U.S.’s top nuclear envoy, Stephen Biegun, suggesting it was unlikely that he might meet with North Korea officials. The two sides haven’t met since Trump and North Korean leader Kim Jong Un promised to restart working-level talks in “two to three weeks” during their unprecedented June 30 meeting at the Demilitarized Zone. Read more from Jihye Lee.

Trump Moves to Expedite Vets’ Loan Forgiveness: Totally and permanently disabled veterans will be eligible to have their federal student debt eliminated through a new expedited process under a memorandum Trump signed yesterday. “The debt of these disabled veterans will be entirely erased, it’ll be gone. You’ll sleep well tonight,” said Trump shortly before signing the order at an American Veterans National Convention in Louisville, Ky. The order will wipe out $30,000 on average in student debt owed by more than 25,000 disabled veterans, according to Trump. Read more from Megan Howard.

Vietnam to Join U.S. Naval Drills: Vietnam said it will join the U.S. in naval drills with other Southeast Asian nations for the first time, as it seeks international support in its sea dispute with China. Vietnam, which previously steered clear of direct naval exercises with the U.S., will participate in the drills Sept. 2-6, Ministry of Foreign Affairs spokeswoman Le Thi Thu Hang said at a press conference in Hanoi today. Read more from Nguyen Dieu Tu Uyen.

To contact the editor responsible for this story: Loren Duggan at lduggan@bgov.com