Top Iranian officials all but ruled out talks with the U.S. a day after President Donald Trump extended his most expansive offer yet to the Islamic Republic.

The U.S. must lift sanctions on Iran if it wants to negotiate, President Hassan Rouhani said today. His foreign minister, Javad Zarif, said during a visit to China and Japan that “a meeting between Iran’s president and Trump is unimaginable.” Zarif made a surprise appearance this week on the sidelines of the Group of Seven summit in Biarritz, France.

The reaction sets out the challenges facing Trump after he signaled he could meet with Rouhani and perhaps ease restrictions so Tehran can use some of its oil wealth to access credit. At a news conference before heading back to Washington from the G-7 gathering yesterday, Trump said he’d meet Rouhani “if the circumstances were correct or were right” to discuss their standoff over the 2015 nuclear deal that the U.S. president abandoned.

“We are interested in solving problems in a reasonable way, but we’re not interested in taking photos,” Rouhani said in a televised speech to officials in Tehran. “The key to changing the relationship is in Washington’s hands.” 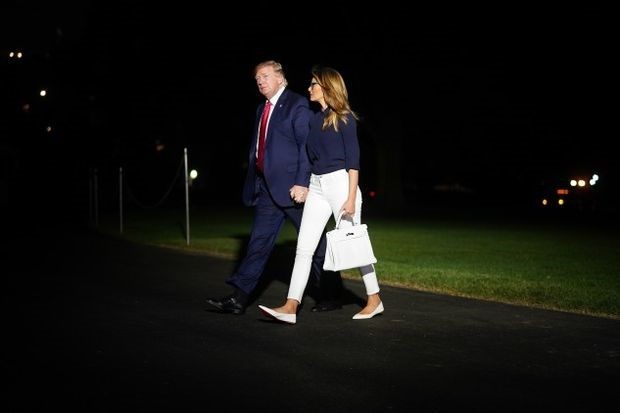 Photo: Chip Somodevilla/Getty Images
The president and First Lady Melania Trump returned from the G7 in France on Monday night

Sanders, Warren Tensions Grow: Sens. Bernie Sanders (I-Vt.) and Elizabeth Warren (D-Mass.) are both attracting large crowds as they try to build a movement to transform the U.S. — but they’re standing in each other’s way. Underneath the niceties — the two mostly agree on the issues and refuse to attack each other — are growing tensions among their allies and supporters as each makes a case to carry the progressive mantle. If no clear choice emerges, it could split the liberal wing and end up helping moderate Joe Biden, who is leading in most polls as they’re locked in a tight battle for second. And both camps have plenty of stubborn supporters who distrust the other candidate.

The two New England senators poll well with those who identify as liberal. Warren does better with older voters and loyal Democrats, while Sanders is stronger with younger people and disaffected voters who say they feel ignored by both parties. Conversations at recent Sanders and Warren campaign events in San Francisco and Seattle revealed significant differences in their supporters’ priorities — and how they view each other. Read more from Sahil Kapur.

Sanders Would Seek Moratorium on Media Mergers: Sanders has taken on Wall Street, big oil producers, credit card issuers and private prison operators. Now the Democratic presidential candidate is taking aim at mergers among the nation’s biggest media companies. In an op-ed yesterday in the Columbia Journalism Review, he said that if elected president he would impose an “immediate moratorium” on approval of deals that would make media giants even bigger. “We are not going to rubber stamp proposals like the new plan to merge CBS and Viacom into a $30 billion colossus,” he wrote. He also said that major media companies should be required to disclose whether their planned mergers could bring newsroom job cuts, and employees should be able to purchase media outlets through stock-ownership plans. Read more from Laura Litvan.

Trump’s Alabama Campaign Team Ignores Sessions: Former Attorney General Jeff Sessions, who earned Trump’s ire during the Russia investigation, shouldn’t be surprised that the president doesn’t want him by his side for his re-election. The Trump 2020 campaign announced its honorary state chairs for Alabama yesterday, and Sessions’ name is conspicuously absent from the list, even though he was Trump’s first Senate endorsement from 2016. The list includes other notable elected officials from the state, including Governor Kay Ivey and Sen. Richard Shelby (R-Ala.). (Sessions’ old seat is now filled by Sen. Doug Jones (D-Ala.), who is up for re-election in 2020 as well.) Read more from Ryan Teague Beckwith.

Officials Urged to Back Flu Vaccine for Detainees: Leaders in the Department of Health and Human Services should support giving flu vaccinations to migrants in U.S. custody as a matter of public health, House Energy and Commerce Chairman Frank Pallone (D-N.J.) said in a letter to health leaders yesterday. The request comes after U.S. Customs and Border Protection said it doesn’t plan to provide flu vaccines to those detained at its facilities. Concern from critics of the decision is amplified by the flu-related deaths of at least three migrant children who died in U.S. custody since December 2018. Read more from Madison Alder.

E&C Seeks Info on Illnesses, Death Linked to E-Cigarettes: Pallone also wants more information from the Food and Drug Administration and Centers for Disease Control and Prevention on recent pulmonary illnesses and a death in Illinois that may be linked to e-cigarette use, Shira Stein reports. “More information is needed to better understand the link between e-cigarette use and these life-threatening illnesses, the long-term health impacts of these products, and what manufacturers are doing in response to these illnesses,” Pallone said in a statement.

Congress Plays Catch-Up on Artificial Intelligence: How artificial intelligence is changing the workplace is starting to get the attention of congressional lawmakers at a time when some employment attorneys are sounding alarms about the need for legislation. The House Education and Labor Committee plans to hold hearings on machine learning’s impact on workers and their jobs after Congress returns from recess in September.

However, while a hearing is usually a precursor to legislation, employers using AI-based tools and tech companies developing those programs probably don’t need to worry about new bills anytime soon. The focus on Capitol Hill remains on trying to understand what the effect of artificial intelligence on workers could be. Read more from Jaclyn Diaz.

Pentagon Revamps Venture Capital Fund: The Pentagon said yesterday it has scrapped plans for a “complicated, expensive” website to link up rich investors with smaller defense companies as part of a new venture capital fund. Instead, officials will use the Trusted Capital Marketplace announced in May to facilitate face-to-face meetings across the country with the aim of spurring developments in small drones before branching out into other key capabilities sought by the military, said Ellen Lord, the undersecretary of defense for acquisition and sustainment. Read more from Travis J. Tritten.

SEC Chief’s Crypto Skepticism Sets Up Facebook Clash: Facebook’s June announcement that it was creating its own token, called Libra, has intensified a global debate about oversight of cryptocurrencies. Securities and Exchange Commission Chairman Jay Clayton is seen as a logical regulator by some lawmakers and Trump administration officials, who’ve been forced to confront the legal and economic consequences of Facebook’s 2 billion users embracing a payment system that’s outside of the government’s control. Facebook, however, is eager to avoid SEC oversight. Robert Schmidt and Ben Bain interview Clayton about his views on the crypto universe.

Meanwhile, a senior official with Facebook’s Libra is calling on its more than two-dozen other members to come to the project’s defense as regulatory scrutiny intensifies in the U.S. and Europe. “It’s time for us to speak up individually and collectively and build some momentum coming into the end of 2019,” Bertrand Perez, the Libra association’s managing director and chief operating officer, said in an email yesterday seen by Bloomberg Law. Lydia Beyoud has more.

China Still Unaware of Calls Mentioned by Trump: China declined to confirm phone calls with the U.S. that Trump claimed happened over the weekend, during which Trump said China indicated it wanted to work toward a trade deal. “I’m not aware of that,” Chinese Foreign Ministry spokesman Geng Shuang said at a regular briefing in Beijing today. “Regretfully the U.S. has announced its decision to add new tariffs on Chinese products. Such maximum pressure will hurt both sides and is not constructive at all.” Read more.

Administration Asks Supreme Court to Allow Asylum Limits: The Trump administration asked the U.S. Supreme Court to allow nationwide enforcement of a new rule that would sharply limit who can apply for asylum at the Mexican border. The administration yesterday called on the justices to put on hold a ruling that prevents the new rule from taking effect in California and Arizona. The policy is aimed at curbing applications from people who travel to the U.S. through Mexico from Central America. Read more from Greg Stohr.

Oracle to Appeal Cloud Ruling: Oracle said it plans to appeal a court ruling that dismissed its legal challenge of the Pentagon’s cloud-computing contract, a project valued at as much as $10 billion. Oracle contended in its lawsuit, which was dismissed in July, that the Joint Enterprise Defense Infrastructure, or JEDI, contract violated federal procurement laws and was unfairly compromised by personal relationships between former Pentagon officials and competitor Amazon.com. Federal Claims Court Senior Judge Eric Brugginkru led that Oracle didn’t meet the criteria for the bid and thus didn’t have the legal standing to challenge the terms of the procurement process. Read more from Naomi Nix.

Is a Printed Gun Free Speech? It’s a question of who’s violating the U.S. Constitution when it comes to print-at-home guns — the federal agency accused of recklessly deregulating the weapons or the states that claim they’re a threat to public safety. A federal judge could provide an answer any day now — and address the balance of power between states and the federal government — in a ruling on digital blueprints that a small gun-technology company, Defense Distributed, wants to publish online for anyone with a 3-D printer . Read more from Erik Larson.

Blankenship’s Conviction Should Be Voided, Judge Says: Former coal baron Donald Blankenship’s conviction for flouting mine-safety laws following a 2010 explosion that killed 29 workers should be thrown out because errors by prosecutors tainted his trial, a magistrate judge in West Virginia said. The former chief executive officer at Massey Energy was sentenced in April 2016 to a year in federal prison for a misdemeanor conspiracy charge. A federal magistrate judge’s recommendation yesterday that the conviction be set aside will be reviewed by the U. S. district judge who presided over Blankenship’s trial and sentenced him. His conviction was upheld on appeal in 2017. Read more.

Craig Said to Object to Skadden Registration: Gregory Craig urged his former law firm Skadden Arps Slate Meagher & Flom against registering as an agent of the Ukrainian government in 2013, the firm’s general counsel told a jury yesterday. Lawrence Spiegel recounted how Skadden was open to registering its work for Ukraine as the Justice Department determined whether the firm had to put the activity on the books.

But Spiegel said Craig, a former White House counsel for President Barack Obama, was adamant Skadden didn’t need to register under the Foreign Agents Registration Act, and that doing so would limit his ability to take another job in the Obama administration. Craig is in the third week of trial on a felony false statements charge stemming from Special Counsel Robert Mueller’s probe of Russian meddling in the 2016 U.S. election. Read more from Jacob Rund.