Speaker Nancy Pelosi moved the Democrats’ impeachment inquiry of Donald Trump into a new phase yesterday that signals the public soon will get a look at the witnesses and evidence being assembled to build a case against the president.

Amid Republican complaints that the investigation is illegitimate, Pelosi announced that the full House would vote this week on the next steps for the existing inquiry being run by three committees.

Even before the House acts, the committees are set to get a key piece of evidence today when a former Army officer assigned to the White House National Security Council testifies that he listened to Trump’s July telephone call with Ukraine’s president and was so disturbed by the conversation that he reported it to the NSC’s legal counsel.

“I did not think it was proper to demand that a foreign government investigate a U.S. citizen, and I was worried about the implications for the U.S. government’s support of Ukraine,” Lieutenant Colonel Alexander Vindman said in a statement prepared for the inquiry.

Vindman is testifying voluntarily under subpoena despite White House attempts to prevent current and former administration officials from cooperating with the House probe. His account of Trump’s call largely corroborates the complaint of an intelligence community whistleblower, who Trump and his allies have dismissed as passing on second-hand information. Vindman said in his statement that he is not the whistleblower.

In announcing the vote, Pelosi and her fellow Democrats are directly challenging the White House rationale for attempting to block witnesses from testifying and refusing to turn over documents. Read more from Billy House. 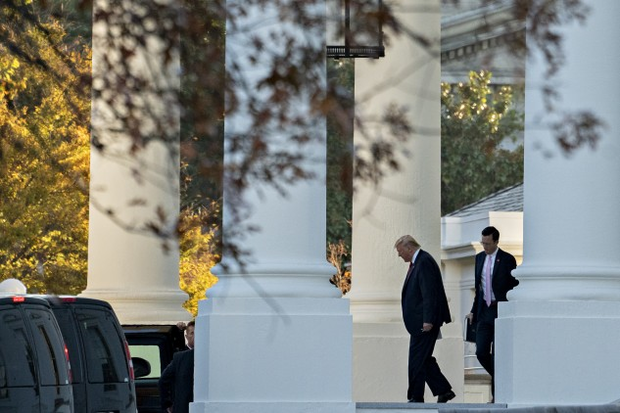 Photographer: Andrew Harrer/Bloomberg
Trump at the White House on Monday.

House to Vote on Turkey Sanctions: The House will vote today on a bipartisan bill to sanction Turkey, warning that a deal struck with the Trump administration won’t save the NATO ally from economic punishment for invading northern Syria. The bill to sanction Turkish leaders and restrict the military’s access to financing and arms is expected to pass on a strong bipartisan vote, reflecting the widespread outrage over Trump’s decision to withdraw American troops. Lawmakers say that decision opened the door to Turkish forces and allied militias to invade territory controlled by the Kurds, an ethnic minority that fought with the U.S. to defeat Islamic State. Read more from Daniel Flatley.

USMCA Advocates See Impeachment as Leverage: U.S. companies and trade groups that want lawmakers to approve a new trade pact with Mexico and Canada are making the unusual bet that the impeachment drama in Washington could actually help get the deal through Congress. Industry coalitions and smaller firms have increased their lobbying in recent weeks in a bid to get the U.S.-Mexico-Canada Trade Agreement ratified before the presidential race heats up early next year.

Yet, while that timetable would put the USMCA squarely in the path of the intensifying impeachment probe of Trump, deal supporters say they see that as a potential advantage. They’re wagering that House Democrats will want to show voters that the party can still do other business while investigating the president. That would blunt criticism from Trump and Republican allies who have faulted Pelosi and Democrats for focusing too much on impeachment. Read more from Mark Niquette.

Boeing Said Kept Hazard Info: Boeing concluded during the development of the 737 Max that if pilots failed to recognize a malfunction on a critical flight-control feature it could prove catastrophic, but the company didn’t notify U.S. regulators, House Transportation and Infrastructure Chairman Peter DeFazio (D-Ore.) said on Monday, speaking to reporters before two days of testimony by Boeing CEO Dennis Muilenburg begin today. DeFazio said that’s one issue the executive will be questioned about. Read more from Alan Levin and Steven T. Dennis.

E-Cigarette Delivery Bill Passes: The House yesterday passed a bill (H.R. 3942) by a voice vote that would subject home delivery of e-cigarettes to many of the same legal requirements as cigarettes. The measure would ban the sale or delivery of e-cigarettes and other nicotine vaping products to anyone under the legal age for buying combustible cigarettes. “Minors can’t buy e-cigarettes in a store and they shouldn’t be able to buy them online,” said Rep. Kelly Armstrong (R-N.D.), one of its sponsors, at a recent hearing, Alex Ruoff reports.

Bill to Combat Online Predators Approved by Senate: Bipartisan legislation to increase the criminal penalties on sexual predators who use the internet to stalk children was passed by the Senate, Nancy Ognanovich reports. The (Combat Online Predators Act, approved by unanimous consent, would increase penalties for stalkers under federal law by up to five years if the victim is a minor. The bill also calls for the Justice Department to evaluate federal, state, and local efforts to enforce stalking laws and identify enforcement efforts’ best practices.

Federal Pensions Investing in China: Sen. Marco Rubio (R-Fla.) said yesterday that he’s planning legislation to block U.S. government pensions from investing in Chinese stocks after the board overseeing the funds put off a decision that would add exposure to China. The Federal Retirement Thrift Investment Board yesterday addressed concerns that switching the benchmark for its $50 billion TSP I Fund to mirror an index with Chinese assets would undermine U.S. economic and national security. A decision was delayed for at least two weeks, according to Kim Weaver, the board’s spokeswoman. Read more from Jenny Leonard and Ben Bartenstein.

Biden in Danger of Loss in Iowa: Joe Biden risks a humiliating third or fourth-place finish in Iowa early next year, according to nearly a dozen senior Democrats in the state who attribute it to what they see as a poorly organized operation that has failed to engage with voters and party leaders. With fewer than 100 days until the Feb. 3 caucuses, Biden is failing to spend the time with small groups of voters and party officials that Iowans expect and his campaign’s outreach has been largely ineffective, according to 11 senior Democrats in the state. They worry that could send Biden to a crippling loss behind Elizabeth Warren and Pete Buttigieg, who have highly organized campaigns in Iowa, said the Democrats, most of whom spoke on condition of anonymity to speak candidly about the campaign. Recent polls have Warren tied with Biden and one survey shows Buttigieg in third place in the state. Read more from Tyler Pager.

N.C. Sued Over Saturday Vote Dump: North Carolina’s politicians will have to work fast if they want to hold congressional primaries on March 3. Those elections may have to be pushed back after a court ruling yesterday barred the use of the state’s latest congressional map.

The North Carolina Superior Court for Wake County issued an injunction blocking the use of the state’s 2016 congressional map, pending further review. The court said the plaintiffs showed that they were likely to prevail in their argument that the boundaries were illegally drawn to maximize Republican advantage. If the state can’t produce a House district map that meets the court’s standards, it could wreck plans to hold congressional primaries alongside presidential “Super Tuesday” balloting in March.

DNC Wins Appeal in Primary Suit: The Democratic National Committee won a proposed class suit alleging the 2016 presidential primary process was biased against Sen. Bernie Sanders (I-Vt.), as the Eleventh Circuit said donors lacked standing for some claims and other claims lacked merit. The plaintiffs sued on behalf of donors to the DNC, donors to Sanders’s 2016 campaign, and registered Democratic voters in various states. Although they promised the process would be “neutral” and “impartial,” the DNC and former Chairwoman Debbie Wasserman Schultz improperly tipped the scales in favor of former Secretary of State Hillary Clinton over Sanders, the plaintiffs alleged. Read more from Julie Steinberg.

Scaramucci Plans to Announce Anti-Trump PAC: Former White House communications director Anthony Scaramucci said he’s visiting two swing states a week as he prepares to launch a political action committee in January to prevent the re-election of Trump. “We will be announcing the PAC and the fund-raising for the PAC in early January,” Scaramucci told Bloomberg Television in Riyadh, Saudi Arabia, where he’s attending an investment conference. “I am looking to raise a couple of million dollars,” he said today. “Not going to go crazy. This is surgical.” Read more from Manus Cranny.

Economist Mankiw Says He Quit ‘the Party of Trump’: Greg Mankiw, who served as chief economist to former President George W. Bush, said he quit the Republican party because too many of its members are ignoring Trump’s “misdeeds,” pledging to help Democrats to pick a moderate candidate to defeat him in the 2020 election. “Too many Republicans in Congress are willing, in the interest of protecting their jobs, to overlook Trump’s misdeeds (just as too many Democrats were for Clinton during his impeachment),” the Harvard economist wrote on his blog. “I have no interest in associating myself with that behavior.” Read more from Brendan Murray.

States Woo Obamacare Customers: States are aggressively seeking to pull more people into the Obamacare markets as open enrollment nears for 2020. States from Pennsylvania to California are setting up their own exchanges, expanding subsidies, and bolstering their outreach in an effort to boost enrollment and take greater control over their health insurance markets. The efforts come as the Affordable Care Act markets continue to show signs of stabilizing for 2020 after experiencing turbulence in their early years. Read more from Sara Hansard.

GM, Toyota Side With Trump in Emissions Battle: General Motors, Toyota and Fiat Chrysler plan to back Trump in a contentious battle with California officials over automobile emissions rules, splitting with major rivals including Ford. GM, Toyota and several other automakers plan to intervene on the administration’s behalf in a lawsuit filed by environmental groups challenging the Department of Transportation’s rule stripping California of its ability to regulate tailpipe greenhouse gas emissions. The move was announced yesterday by John Bozzella, a spokesman for the companies siding with the administration, who call themselves the Coalition for Sustainable Automotive Regulation. Read more from Ryan Beene.

Amazon Is Seen Focusing on Trump in Contract Challenge: Within hours of Amazon losing a lucrative Pentagon cloud-computing contract to rival Microsoft there were hints that the company would challenge the decision. Amazon has several options to do so, extending from federal courts to Capitol Hill — and, with the clock ticking on some of them, the company is expected to move expeditiously. Read more from Matt Day, Naomi Nix and Daniel Seiden.

Files in Sex Assault Case: A former reality-TV star who claims Trump forcibly kissed and groped her before he was president reached a deal with the Trump Organization to unseal nine more pages of documents she says corroborate her story. Summer Zervos, a former contestant on Trump’s “Apprentice,” last week asked a New York judge to nullify the president’s assertion of confidentiality over the papers. But yesterday, the parties agreed that Trump will now do so voluntarily. Read more from Erik Larson.