The debate threw into sharp relief a dividing line among Democrats, as the contenders argued how far to go to insure more Americans, remove guns from the streets and promote fair trade.

Over three hours, former Vice President Joe Biden led the moderate camp, raising doubts about the cost of “Medicare for All” and defending his four-decade record of public service.

In her first time on stage with Biden, Sen. Elizabeth Warren (D-Mass.) held back, training her fire on Wall Street and Washington lobbyists rather than her Democratic rivals and retelling her personal story.

But with Warren rising in the polls, Biden took the chance to press her on her health care proposal.

“Thus far, my distinguished friend, the senator on my left, has not indicated how she pays for it,” he said.

The rest of the field had brief moments that, for better or worse, defined their nights. Sen. Kamala Harris (D-Calif.) used her time to directly attack President Donald Trump; former Housing and Urban Development Secretary Julián Castro went after Biden on health care and immigration; South Bend, Indiana, Mayor Pete Buttigieg popped in at times to call for civility and former Rep. Beto O’Rourke (D-Texas) repeated his call for a mandatory assault weapon buyback. Entrepreneur Andrew Yang announced that his campaign would give $1,000 a month for a year to 10 families to highlight his proposal for a universal basic income.

There were likely no game-changing moments during the debate, but it provided plenty of fodder for moderates and progressives as they outline two very different approaches to taking on Trump in the months to come. Ryan Teague Beckwith has more takeaways from the debate. 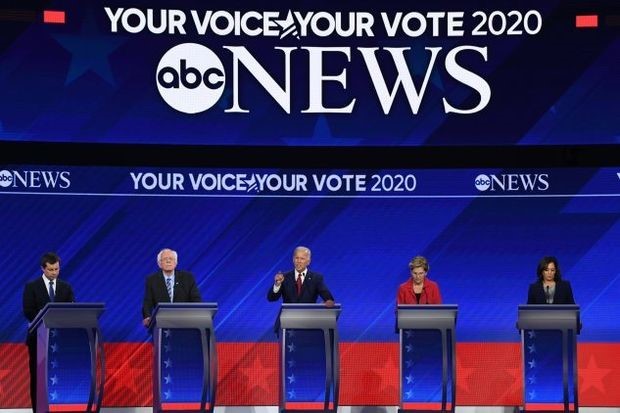 What the Candidates Talked About: If the debates are any indicator, health care is shaping up as the hallmark issue of the 2020 Democratic primary. The 10 candidates who took part in the debate in Houston sparred about health care more than any other issue—21% of topics during the nearly three-hour event. It’s been the top issue discussed in the three Democratic debates so far. Guns were a focus for the candidates after recent mass shootings. Foreign policy—particularly Trump’s handling of an escalating trade war with China—and education were discussed more than in earlier debates. Lauren Leatherby, Allison McCartney, Mira Rojanasakul and Jeremy C.F. Lin have more.

Biden Wins by Not Losing: Rivals eager to dislodge Biden from his front-runner’s perch tried attacking him in last month’s debate and going easy on him in last night’s debate. Neither worked. The night in Houston highlighted a puzzle that has vexed 2020 hopefuls — how to knock Biden off his game. Frequent gaffes haven’t hurt him. His 76 years haven’t stopped him. His checkered history on race hasn’t sunk him. Read more from Sahil Kapur.

Trump Comments from Afar: Trump did his best to join Democrats on the debate stage last night, assailing several of his would-be 2020 opponents during a speech to Republican lawmakers in Baltimore. He once again derided Warren as “Pocahontas” and Biden as “Sleepy Joe.” Trump attacked Democrats’ proposals on health care, the environment and energy. He said that with windmills generating electricity, viewers wouldn’t be able to watch Democrats debate if the wind wasn’t blowing. Read more from Jordan Fabian and Justin Sink.

Boeing Interviews in 737 Probe Sought: House Transportation and Infrastructure Chairman Peter DeFazio (D-Ore.) and Aviation Subcommittee Chairman Rick Larsen (D-Wash.), whose panel is examining the two crashes of the Boeing 737 Max that led to its March worldwide grounding, are seeking interviews with employees. The committee wrote to Boeing CEO Dennis Muilenburg to request the interviews, it said in a statement yesterday. Read more from Alan Levin.

Trump Plans to Unveil Middle Class Tax Cut: Trump said yesterday that he’s planning a tax cut directed at the middle class that will be announced in the next year. “It will be a very substantial tax cut,” Trump told Republicans at the retreat in Baltimore. He said the tax cut would be “very, very inspirational” without providing details.

Trump spoke a day after deciding against cutting the tax on capital gains by indexing gains to inflation. That decision was announced late Wednesday after a meeting earlier between the president and his economic advisers, who discussed whether to move ahead with the tax break. The administration has also put off the idea of a possible cut in payroll taxes, Treasury Secretary Steven Mnuchin told CNBC earlier yesterday. Mnuchin said that Trump was focused instead on a second round of proposed tax cuts. Read more from Jordan Fabian and Laura Davison.

Trump Paves Way For Arctic Drilling Rights Sale: The Trump administration yesterday took a major step toward auctioning oil drilling rights across every acre of the Arctic National Wildlife Refuge’s coastal plain, hours after the House voted to outlaw the activity. In an environmental impact statement, the Interior Department acknowledged oil development in the refuge’s 1.56 million-acre coastal plain could affect polar bear and caribou that roam through the region.

Nevertheless, the document released yesterday sets the stage for an auction later this year; it is a required legal step before the Interior Department can take bids. The Trump administration’s proposal to open the entire coastal plain for leasing goes far beyond a congressional mandate to make at least 400,000 acres available and hold two auctions of oil and gas leases by 2021 and 2024. Congress lifted decades-old restrictions on oil development in the refuge and required the sales in 2017, as a way to pay for the tax overhaul. Read more from Jennifer A. Dlouhy.

Trump Open to Interim China Deal: Trump administration officials have discussed offering a limited trade agreement to China that would delay and even roll back some U.S. tariffs for the first time in exchange for Chinese commitments on intellectual property and agricultural purchases, according to five people familiar with the matter. Some of Trump’s top trade advisers in recent days have discussed the plan in preparation for two rounds of face-to-face negotiations with Chinese officials in Washington, due to take place in coming weeks, the people said. Read more from Jenny Leonard and Shawn Donnan.

Meanwhile, China is encouraging companies to buy U.S. farm products including soybeans and pork, and it will exclude those goods from additional tariffs. The Commerce Ministry’s announcement today follows a move earlier this week to exempt a range of American goods from 25% extra tariffs put in place last year, as the government seeks to ease the impact from the trade war. China didn’t specify the amount of purchases of pork and soybeans, which are key exports in agricultural states important fo r Trump ahead of next year’s election. Read more from Crystal Chui.

Trump Seeks to Block District Court Injunctions: The Trump administration is looking for a vehicle to challenge in the Supreme Court what it calls overreach by federal district courts in issuing national injunctions against environmental rules. In past years, district courts issued injunctions against rules only as they applied in a particular geographic area or situation in the challenge to the rule. But more recently, federal judges have been issuing nationwide injunctions on a rule when a challenge is brought to their court, said Eric Grant , deputy assistant attorney general of the Environment and Natural Resources Division of the U.S. Justice Department. Read more from Adrianne Appel.

Gorsuch Joins Justices ‘Lifting the Veil’ With Memoirs: Neil Gorsuch just penned his first book as a Supreme Court justice, joining a growing list of high court colleagues who’ve penned memoirs to tell their stories and influence their legacies. Gorsuch’s “A Republic, If You Can Keep It” is styled as a call for more civility and civic understanding. But it has elements of memoir, including his Colorado roots, his Supreme Court clerkship, and his decade on what he calls “the most collegial federal circuit in the country.”

“Years ago, such books would be seen as very unusual for a sitting justice to write—lifting the veil, if you will, on the ‘invisible’ court,” said Elliot E. Slotnick, who studies judicial politics at Ohio State University. “Going public,” though, is “less of a norm violation these days,” Slotnick said. Read more from Kimberly Strawbridge Robinson.