The Justice Department has opened a criminal investigation into whether Donald Trump or his 2016 presidential campaign was illegally spied upon, according to a person familiar with the matter, escalating the controversy surrounding an inquiry that has remained largely secret for months.

John Durham, the federal prosecutor leading the effort, now has the authority to convene a grand jury and issue subpoenas to compel witnesses to testify or turn over documents.

Trump and his allies have long contended that the investigation into Russian interference in the election, which led to the inquiry headed by Special Counsel Robert Mueller, originated with false accusations and was politically motivated.

The expansion of the Durham inquiry, which was first reported by the New York Times, comes as an impeachment investigation in the House has become a growing threat to the Trump presidency. Even before Durham received his new powers, Democrats and others had expressed concerns that Trump wanted to weaponize the Justice Department to further his political aims.

Until now, Durham, who heads the U.S. attorney’s office in Connecticut, has been doing a review into U.S. counterintelligence activities conducted by the CIA, FBI and other agencies before and after the 2016 election, especially related to Trump’s campaign and the early days of his presidency. U.S. Attorney General William Barr told the Senate Judiciary Committee in May he was concerned there may have been improper spying, though he added at the time he didn’t have any concrete evidence. Shortly after the hearing, Barr appointed Durham to lead the review. Read more from Chris Strohm. 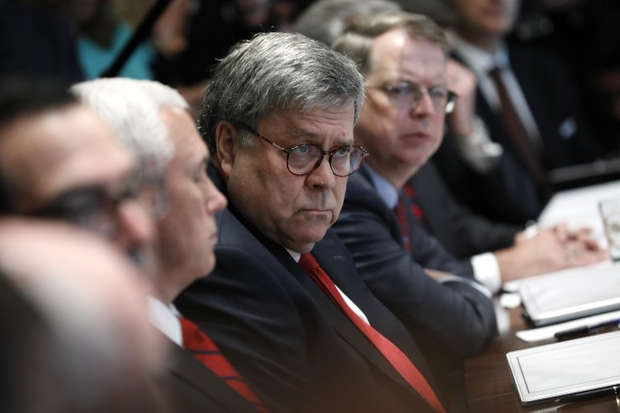 Photographer: Yuri Gripas/Abaca Press/Bloomberg
Barr listens during a Cabinet Meeting at the White House on Monday.

Trump Asks to Reconsider Congress-Subpoena Ruling: Trump asked a federal appeals court to reconsider its ruling upholding a subpoena ordering his accountants to provide Congress with his financial records. Trump’s lawyers filed the request late yesterday, urging the three-judge panel or the full appeals court in Washington to rehear the case. They argue that the court, in its 2-1 ruling, made three significant errors on Oct. 11. Among them: It wrongly concluded that Congress’s subpoena had a valid legislative purpose. Read more from David Glovin.

Impeachment Schedule Update: The three committees investigating Trump aren’t hearing from witnesses today because the House is adjourned for ceremonies honoring the late Rep. Elijah Cummings (D-Md.). Philip Reeker, the acting assistant secretary of state of European and Eurasian affairs, is scheduled to appear tomorrow. Two more witnesses are expected to give depositions to House investigators next week, an official working on the impeachment inquiry said last night. Billy House has next week’s schedule here.

Cummings Tribute: Republicans and Democrats put partisanship on pause yesterday to remember Cummings, the revered chairman of the House Oversight and Reform Committee, who died Oct. 17. Current and former lawmakers paid tribute to a man they described as a trusted confidant, respected leader and the embodiment of the American dream. Impeachment hearings set by the House Oversight and Reform Committee and two other panels were canceled yesterday as Cummings laid in state in Statuary Hall at the Capitol. “Elijah was truly a master of the House. He respected its history and in it he helped shape America’s future,” Speaker Nancy Pelosi (D-Calif.) said. Read more from Evan Sully.

Senate Wants Reports on ‘Deep Fakes’: The Senate yesterday approved a bill that would require the secretary of the Department of Homeland Security to make annual reports on the growing use of so-called deep fake technologies, Nancy Ognanovich reports. The bill, introduced by Sen. Rob Portman (R-Ohio) and reported by the Homeland Security and Government Affairs Committee in July, was passed by unanimous consent.

Senate Backs More Ag Inspectors: The Senate approved a bill to address a shortage of agricultural inspectors at key ports of entry, Ognanovich reports. The bipartisan bill, passed by unanimous consent, authorizes U.S. Customs and Border Protection to hire an additional 240 agricultural specialists annually until the workforce shortage is filled and 200 agricultural technicians annually to carry out administrative and support functions. The bill also authorizes the training and assignment of 20 new canine teams annually.

Banning Iran Nuclear Waivers: Two of the Senate’s staunchest opponents of the Iran nuclear deal drafted legislation that would bar Trump from renewing waivers allowing Iran to maintain a limited civil nuclear program. The legislation from Sens. Ted Cruz (R-Texas) and Lindsey Graham (R-S.C.) is part of a broader effort by hardline opponents of the Joint Comprehensive Plan of Action of 2015, which Trump withdrew the U.S. from last year, to end the few remaining benefits Iran still gets from the agreement. Read more from Nick Wadhams.

Schumer Floats $454 Billion Clean Cars Plan: Senate Minority Leader Chuck Schumer (D-N.Y.) said if Democrats win control of the chamber next year, he would put an ambitious plan on the floor to remove gas-powered vehicles from American roads by 2040. Schumer’s $454 billion plan echoes “cash-for-clunkers,” a short-term vehicle scrappage incentive Congress enacted roughly a decade ago to give a boost to plummeting auto sales during the financial crisis and clean up the U.S. fleet. Consumers would be given a “substantial” cash voucher to trade in older gasoline-powered cars for U.S.-assembled electric, hybrid or hydrogen fuel cell autos, with additional rebates for lower income families. Read more from Chelsea Mes and Ryan Beene.

DeFazio Subpoenas GSA for Trump Hotel Lease: House Transportation and Infrastructure Chairman Peter DeFazio (D-Ore.) issued a subpoena to the General Services Administration for documents regarding the federal lease with the Trump International Hotel in Washington, Kim Chipman and Alan Levin report. DeFazio and Rep. Dina Titus (D-Nev.), chairwoman of the subcommittee on public buildings, cited “potential conflicts of interest and constitutional emoluments violations on the part of the president,” according to a statement.

Biden Unveils Labor Plan: Joe Biden is proposing a wide array of ideas aimed at helping workers unionize and protecting their rights as he seeks to show voters that he will fight for them in ways that he says Trump has not. The candidate today released a series of pledges aimed at countering what his campaign calls “the abuse of corporate power over labor,” while also encouraging workers to organize. Some of the measures build on existing legislation or efforts by the Obama administration.

Biden is presenting his labor plan days after he returned to his hometown of Scranton, Pa., for a speech touting his middle-class roots and values, and assailing all the ways he sees Trump failing to deliver for working Americans. Read more from Jennifer Epstein.

Sanders Proposes Expunging Pot Convictions: Sen. Bernie Sanders (I-Vt.) broadened his proposal for legalizing marijuana, offering a detailed plan yesterday that includes expunging past criminal convictions for possession, investing in communities hit hardest by the “war on drugs” and barring tobacco companies from participating in the expanding pot industry. Sanders said he’d direct federal and state officials to expunge past marijuana-related convictions and re-sentence those currently incarcerated. He would establish a $10 billion Agriculture Department grant program to help people who have been arrested for or convicted of marijuana offenses to start urban and rural farms and growing operations. Read more from Laura Litvan.

Trump Considers Retreat From Vaping Flavors Ban: The Trump administration is considering backing away from a pledge to ban popular mint and menthol vaping products — part of an effort to stem use among kids and curb a growing health crisis — as e-cigarette advocates press to preserve some flavors for adults. Health and Human Services Secretary Alex Azar said last month that the administration would soon ban all flavors of vaping products except tobacco-flavor. But the administration is reconsidering on mint and menthol, two people familiar with discussions said. The unresolved deliberations show the Trump administration is grappling with a complex political dilemma around a product linked to a growing number of illnesses and deaths, but whose advocates say is less harmful than smoking. Read more from Josh Wingrove, Gerald Porter Jr. and Michelle Fay Cortez.

China Fires Back at Pence: China fired back at Vice President Mike Pence’s criticism on human rights, calling his speech “lies” and chiding him for ignoring U.S. problems like racism and wealth disparity. Pence yesterday gave a long-anticipated speech in which he criticized China’s actions against protesters in Hong Kong while calling for greater engagement between the world’s two biggest economies. Hua Chunying, a spokeswoman for China’s foreign ministry, blasted Pence’s “arrogance” and said no force would stop the country’s progress. Read more from Carolynn Look and Jenny Leonard.

DeVos Fined for Failure to Forgive Student Debt: Secretary of Education Betsy DeVos was hit with a $100,000 fine for violating a judge’s order to stop debt collection efforts against former students at bankrupt Corinthian Colleges. Despite the order, the department went as far as seizing the students’ tax refunds and wages.

VA Agency Said Not Protecting Whistleblowers: An office set up to protect whistleblowers at the Veterans Affairs Department and to hold VA executives responsible for wrongdoing isn’t succeeding on either count, the VA’s inspector general office said. The Office of Accountability and Whistleblower Protection isn’t holding executives accountable for misconduct and poor performance, and it’s also failing to protect whistleblowers from retaliation, according to a scathing report yesterday from the IG. Read more from Louis C. LaBrecque.

California Faces Biggest, Longest Blackout: Wildfires are raging across California. Half a million people are recovering from a deliberate blackout designed to keep more from erupting. And the worst is yet to come. Even as utility giant PG&E restores power to customers in Northern California that went dark on Wednesday, it was preparing to cut the lights again across much of its territory this weekend in anticipation of the strongest wind storm in years. It may prove to be the biggest, longest blackout planned yet to keep power lines from sparking fires. Millions are facing as many as two days in the dark. Read more from Mark Chediak, David R. Baker and Brian K. Sullivan.

Trump Sex Accuser Says Documents Back Story: A former reality-TV star who claims Trump sexually assaulted her before he was president said documents that the Trump Organization was forced to hand over corroborate her story. Former “Apprentice” contestant Summer Zervos yesterday asked the New York state court in Manhattan to unseal nine additional pages of documents Trump is trying to keep secret. The Trump Organization is arguing the pages shouldn’t be made public because they include Trump’s old cell number. Read more from Erik Larson.

Trump Says He’ll Attend World Series: Trump said he plans to attend game five of the World Series on Sunday, if the championship goes that long, but doesn’t expect to throw the first pitch. Trump, speaking to reporters in the Oval Office yesterday, said he’ll watch the matchup in Washington between the Washington Nationals and Houston Astros. Washington leads the best of seven series, 2-0, with games three and four set for tonight and Saturday, so it’s not clear yet if there will be a fifth game.

Asked about throwing the first pitch, Trump said: “I don’t know. They got to dress me up in a lot of heavy armor. I’ll look too heavy. I don’t like that.” Read more from Justin Sink.

To contact the editors responsible for this story: Giuseppe Macri at gmacri@bgov.com; Loren Duggan at lduggan@bgov.co