House Democrats are looking to significantly advance the impeachment probe of Donald Trump with testimony today from the top U.S. diplomat to Ukraine, who had warned it was “crazy” to withhold military aid in a bid to get dirt on the president’s political rivals.

Acting U.S. Ambassador William Taylor is a key witness because of his text messages to colleagues expressing concern about the back-channel Ukraine negotiations led by Trump’s personal lawyer, Rudy Giuliani. Taylor’s exchanges with Gordon Sondland, the U.S. ambassador to the European Union, form a crucial part of the inquiry.

“That’s pretty big because he’s on the scene, he was involved in those conversations, he registered his disapproval, he was pretty explicit about this is a quid pro quo and ‘I don’t approve, and it’s crazy,’” said Rep. Gerald Connolly (D-Va.), a member of the Oversight and Reform Committee.

That committee and two others are looking into whether Trump withheld nearly $400 million in U.S. military aid from Ukraine to prod that country to investigate former Vice President Joe Biden and look into a separate theory about the theft of emails from Democrats in 2016.

The panels are set to hear from Laura Cooper, a deputy assistant secretary for the Defense Department, tomorrow.

Multiple officials familiar with the inquiry’s workings said yesterday that the crunch of remaining depositions and other aspects of the investigation were threatening to undo any possible conclusion of the investigation by Thanksgiving or the beginning of December. Some Saturday depositions are being scheduled to speed up the work flow; Philip Reeker, the acting assistant secretary of European and Eurasian affairs at the State Department, is to appear this Saturday. But with Democrats also promising to hold public hearings, the officials said the committees were now looking at finishing up perhaps well into December. Read more from Billy House. 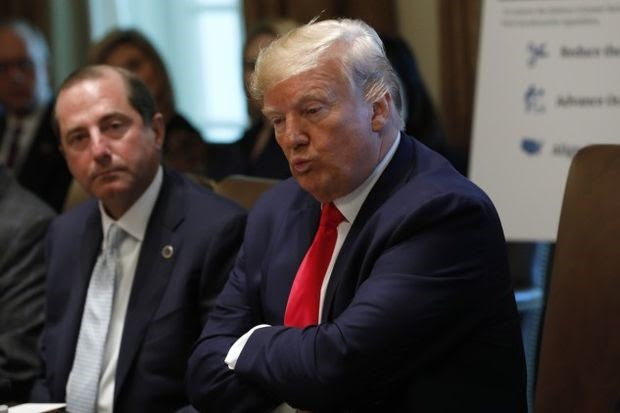 Censuring Schiff Blocked: House Democrats blocked a Republican resolution that would censure House Intelligence Chairman Adam Schiff (D-Calif.) for his handling of the impeachment inquiry. The resolution, authored by House Freedom Caucus Chairman Andy Biggs (R-Ariz.), criticizes Schiff for his description at a committee hearing of Trump’s call to Volodymyr Zelenskiy. Schiff said a rough transcript of the call “reads like a classic organized crime shakedown,” and he characterized Trump’s words as asking Zelenskiy “to make up dirt on my political opponent.”

Testimonies Delayed for Cummings Rites: House impeachment investigators won’t hear witness testimony this Thursday or Friday as ceremonies are held for the late Elijah Cummings, chairman of the Oversight and Reform Committee that is one of the three panels leading the inquiry, Billy House reports.

Trump Wants Barr to Investigate Ukraine: Trump called on Attorney General William Barr to investigate unsupported claims that Ukraine was involved in the origins of the Russia investigation. “I would like the attorney general to find out what’s going on. Because you know what? We’re investigating corruption,” Trump told Fox News in an interview. Barr in May began a sprawling inquiry into the investigation of Russian interference in the 2016 election. That inquiry, led by U.S. attorney John Durham came under renewed scrutiny last week after acting White House Chief of Staff Mick Mulvaney said at a news conference that foreign assistance to Ukraine was held up in order force Kyiv to cooperate with it. Read more from Jordan Fabian.

Lobbying revenue continued to increase throughout 2019, despite turbulence surrounding the Trump administration and partisan gridlock on Capitol Hill.

The third quarter of 2019 was lucrative for many K Street firms, with 20 reporting an uptick in revenue, compared to the same time last year, according to figures provided to Bloomberg Government. In addition, 16 of those firms also had increased lobbying fees from January through September of this year, compared to 2018. It’s a continuation of a growth in lobbying fees since Trump took office.

The deadline to submit lobbying earnings for the third quarter was midnight on Oct. 21, but 23 firms sent BGOV their revenue throughout the day, including the 10 who’ve led K Street over the last year.

Facebook, Amazon Set Lobbying Records: Facebook and Amazon set federal lobbying records in the third quarter as Washington ramps up oversight of the tech giants’ business practices. Facebook spent $4.8 million, an increase of almost 70% from the same period the year before. Amazon spent $4 million on lobbying, the most the e-commerce giant has ever spent in a single quarter. Spending by Alphabet Inc.’s Google dropped almost 50% to $2.8 million from $5.5 million during the same period last year as it reshuffles its Washington lobbying operations under Karan Bhatia. Read more from Naomi Nix and Ben Brody.

Huawei Lobbying Hits Record: Huawei Technologies’s lobbying spending spiked in the third quarter as the Chinese telecom giant hired a fundraiser for Trump with deep ties to Republican leadership to help it fight back against the administration’s blacklisting of the company from the U.S. market. Huawei spent a company record of $1.8 million on federal lobbying in the three months ending in September, up from $30,000 in the same period last year. Read more from Ben Brody.

Juul Spent Record $1.2 Million Lobbying: Juul Labs spent a record $1.2 million on federal lobbying during the third quarter as the largest U.S. e-cigarette maker faced threats that many of its products would be banned following an increase in lung illnesses linked to vaping. The company’s lobbying spending during the three months ending Sept. 30 more than doubled from $560,000 in the same period a year ago. Juul started lobbying in the second quarter of 2018 and has increased its spending each quarter. Read more from Evan Sully and Ben Brody.

Buttigieg Beats Biden in Battle for Silicon Valley: The technology industry is looking for something different in a president in 2020. And it appears Pete Buttigieg is their candidate. While Joe Biden and Sen. Elizabeth Warren (D-Mass.) are topping national polls in the contest for the Democratic Party’s nomination, California’s deep-pocketed Silicon Valley is donating to the 37-year-old mayor of South Bend, Indiana over the former vice president by a 5-to-1 margin. Read more from Bill Allison, Jeffrey Taylor and Sophie Alexander.

Facebook Said in Contact With Warren Campaign: Facebook CEO Mark Zuckerberg said employees are in touch with the Warren campaign to address her concerns about the company’s decision to let politicians lie in ads. “Our teams are definitely in contact although I haven’t spoken to her personally about this,” he said in an interview that aired yesterday on NBC Nightly News. Read more from Sarah Frier.

Twitter Plans Policy for Deep Fakes: Twitter will create a new policy meant to combat manipulated media, including deep fake videos, ahead of the 2020 election. The company doesn’t currently have a policy for how to handle deep fakes, altered videos that distort a subject’s appearance or speech while still looking authentic. Twitter plans to create one, but will first ask the public for feedback, a spokesman said yesterday. Read more from Kurt Wagner.

Tougher Money-Laundering Laws Get Vote: Legislation that would toughen money-laundering rules is a priority of Wall Street banks, and lobbyists are busy working to get it passed by Congress even as the rest of Capitol Hill fixates on impeachment and the 2020 elections. Yet the bill, which the House is set to vote on today, has also faced formidable foes toiling just as hard to weaken or block it. Opponents have included the National Federation of Independent Business and the American Bar Association.

The legislation would make it harder to use anonymous shell companies to break the law. Big banks favor the bill because they would no longer shoulder the full burden of reporting customer wrongdoing to law enforcement. Opponents say it threatens privacy, would create unnecessary burdens for small businesses and won’t actually do much to stop the bad guys. The Senate could take the measure up this year, though it’s not certain the bill will pass. Read more from Elizabeth Dexheimer.

Insider Trading Probe Sought: Separately, Democrats are demanding that U.S. authorities investigate allegations raised in a recent article that traders might be using non-public government information to reap huge illegal profits, even as the exchange where the transactions purportedly took place called the story “patently false.” In a letter yesterday, 14 Senate Democrats urged the heads of the Justice Department, FBI, Commodity Futures Trading Commission and Securities and Exchange Commission to probe “disturbing reports o f suspicious trading in our futures and equities markets” described in a Vanity Fair piece. The magazine referred to the transactions as “Trump Chaos Trades.”

Since the story’s publication, the suggestion that White House leaks could be a factor in futures traders making billions of dollars from well-timed bets ahead of major geopolitical announcements has fueled endless chatter from Washington to Wall Street. Still, the article has been met with widespread skepticism from the financial industry. Read more from Ben Bain and Matt Robinson.

Social Media Sites Pushed on Data Portability: Social media websites such as Facebook and Twitter would be required to make it easier for users to transfer personal data to competing platforms in Senate legislation unveiled today. The bipartisan bill from Sens. Mark Warner (D-Va.), Josh Hawley (R-Mo.) and Richard Blumenthal (D-Conn.) would require internet platforms with more than 100 million monthly U.S. users to establish interfaces that would securely transfer personal data directly to a user or a third-party provider acting on the user’s behalf, according to a copy of the measure obtained by Bloomberg Government. Read more from Rebecca Kern.

Turkey Says Militants Pulling Out of Buffer Zone: Turkey is closely following the pullout of Kurdish fighters from the buffer zone it wants to create in Syria, Turkish President Recep Tayyip Erdogan said today. Turkey gave the Kurdish YPG militia until late today to leave a narrow strip of territory in northeastern Syria under an agreement between Ankara and Washington last week. Onur Ant has the latest.

Trump Says China Signals Trade Talks on Target for November: Trump said China has indicated that negotiations over an initial trade deal are advancing, raising expectations the nations’ leaders could sign an agreement at a meeting next month in Chile. “They have started the buying,” Trump said yesterday during a Cabinet meeting at the White House, referring to Chinese purchases of U.S. agriculture products that the president has pushed for as part of a deal. “I want more,” he added. Earlier yesterday, Commerce Secretary Wilbur Ross said that it was more important to get details of the agreement right than it was for Trump to sign it at an expected meeting with Chinese President Xi Jinping next month in Chile. Read more from Justin Sink and Jordan Fabian.

U.S. Companies Confused Amid Huawei Ban: Five months after Trump blacklisted Huawei, its business seems alive and well while American firms still don’t know whether they can work with the Chinese company or not. The Commerce Department in May added Huawei to what’s known as the entity list in an effort to block U.S. companies from selling components to China’s largest technology company, which it accuses of being a threat to America’s national security. Read more from Jenny Leonard and Ian King.

Trump Touts Regulatory Savings: Federal agencies have rolled back 8.5 regulations for every new one issued since the start of Trump’s administration, far in excess of Trump’s initial goal of two cuts for every one rule, the White House said today. In January 2017, Trump signed Executive Order 13771 imposing the two-for-one regulatory requirement on all departments and agencies, as well as a spending cap of zero for new regulatory costs. Since then, the Office of Management and Budget has reported regulatory cuts far in excess of new rules issued. Read more from Cheryl Bolen.