House Democrats are nearing one of the most important decisions in their effort to impeach Donald Trump: Who will bear the historic duty of prosecuting the president in next year’s Senate trial.

With the House planning to vote tomorrow on two articles of impeachment against the president, Democratic leaders including Speaker Nancy Pelosi (D-Calif.) must quickly settle on a team of so-called managers to present the case against Trump.

Intelligence Chairman Adam Schiff (D-Calif.), who led the House investigation into Trump’s dealing with Ukraine, and Judiciary Chairman Jerrold Nadler (D-N.Y.), whose committee drew up the articles of impeachment, are expected to be named by Pelosi to the trial managers team, according to people familiar with the deliberations.

The makeup of the team will influence the tone of the trial and, ultimately, help set the impression of the Democratic drive toward impeachment for voters as the 2020 election to determine control of the White House and Congress draws closer.

The managers are likely to be formally named tomorrow, the day the lawmakers will vote on the two articles charging Trump with abuse of power and obstruction of Congress.

Members of the Judiciary Committee have been pushing to draw the impeachment managers exclusively from their panel — as was done by Republicans in the 1998 impeachment of Democratic President Bill Clinton. But multiple House Democratic officials said the group would include members of Schiff’s Intelligence panel.

Those selected will effectively become the faces of Trump’s impeachment for the Democratic Party and prominent targets for the president and his Republican allies.

That is especially true for Schiff. He’s been a particular focus of Trump’s wrath on Twitter and elsewhere. Read more from Billy House. 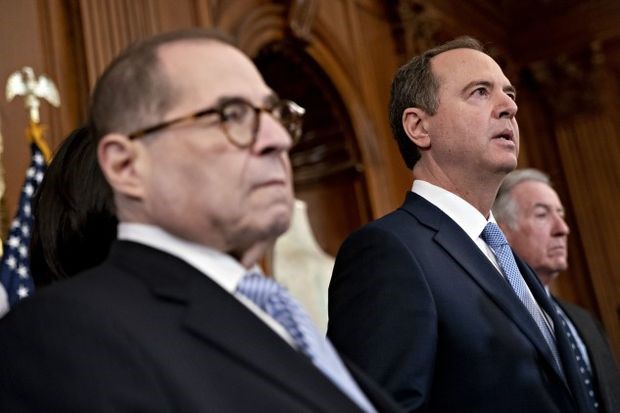 Photographer: Andrew Harrer/Bloomberg
Nadler, left, and Schiff, right, announcing the next steps in the impeachment inquiry on Dec. 10.

Spending Bill: The House plans to vote today on $1.4 trillion in government spending, less than 24 hours after releasing over 2,000 pages of legislative text detailing fiscal 2020 funds. Lawmakers face a Friday deadline to continue funding the government or risk a shutdown.

All 12 appropriations bills would increase spending under the bipartisan agreement between House and Senate appropriators. The set of two spending packages include unrelated measures that would repeal Obamacare taxes, raise the age for tobacco purchases to 21 and extend the Export-Import Bank for seven years.

Complete Details of What’s in the Spending Bills:

Boeing is poised for a big victory in the bill, which would continue funding an advanced version of its Chinook helicopters and reject the Army’s proposal to stop purchasing the aircraft. The Pentagon will also be able to buy eight Boeing F-15 EX fighter aircraft and 98 Lockheed Martin F-35 Joint Strike Fighters, more than it had requested, under the $693.3 billion compromise Defense Department measure. Read more from Roxana Tiron and Travis J. Tritten.

Ride-alongs to the measure include:

A bundle of proposed retirement tax breaks that’s confounded Senate leaders for months has been added to the bill. Lawmakers added the SECURE Act, which aims to bolster retirement savings by rewarding businesses with tax credits for creating new 401(k) accounts and allowing workers to wait until age 72 before drawing down retirement funds, among other things. Warren Rojas has more.

Warren Tempers Medicare for All Rhetoric: Democratic presidential candidate Sen. Elizabeth Warren (Mass.) is starting to back away from a full-blown Medicare for All plan on the campaign trail, as she faces increased questions about whether her support for the proposal hurts her electability. After pushing the swift creation of a government-run health care system that would cover all Americans and eliminate private insurance, Warren is now emphasizing her calls for a transition period that would make it optional for most of her first term in office.

During a three-day bus tour through Iowa, she increasingly stressed the word “choice” in her interactions with voters, saying the three-year implementation period would let Americans keep their existing coverage or try out Medicare for All. Read more from Misyrlena Egkolfopoulou.

Warren Hits Bloomberg Over NDAs: Warren said yesterday that Michael Bloomberg should release women from non-disclosure agreements they signed with his company if they want to speak publicly about allegations of crude remarks and an uncomfortable work environment. Warren was asked to respond to a report by ABC News about several lawsuits that accuse Bloomberg of making crude comments to female employees in the 1990s and creating a workplace where such behavior was tolerated, claims he has denied. Read more from Misyrlena Egkolfopoulou. Bloomberg is the founder and majority owner of Bloomberg Government’s parent company.

Trump Touts Tax Cuts, Deregulation for Market: Trump is asserting that the current labor market revival is a direct result of his administration’s economic policies, especially its deregulatory moves, even as regulatory analysts question how much rule-cutting has been done. A new report by the White House Council of Economic Advisers ahead of a meeting with Cabinet officials, governors, and local leaders on regulatory innovation credited the administration’s “pro-growth policies” for spurring labor demand that has helped job openings to exceed the amount of unemployed people “for the first time on record.” Read more from Cheryl Bolen.

U.S. Rejects Relief for North Korea as Trump Warns Against Tests: The U.S. knocked back a call to ease sanctions on North Korea despite threats of further provocations, as President Donald Trump said he would “take care of” any threats the regime had in the works. The American side was responding to a UN Security Council proposal by China and Russia to lessen the economic embargo on North Korea. The countries — Cold War allies of North Korea who have recently repaired ties with leader Kim Jong Un — said the changes were warranted because the regime had complied with United Nations resolutions and needed “humanitarian and livelihood” relief, according to a draft provided by diplomats who asked not to be named.

The U.S. rejected the proposal, saying it was premature to ease sanctions while North Korea advances weapons prohibited systems and threatens escalation, according to a state department official who asked not be named. The U.S. remained committed to achieving North Korea’s “complete denuclearization” through negotiations, the official said. The Chinese-Russian resolution may prompt further Security Council discussions today. Read more from David Wainer and Jihye Lee.

Pentagon Chief Questions Turkey’s NATO Commitment: Defense Secretary Mark Esper said Turkey’s threats to close two critical NATO installations raise questions about its commitment to the military alliance. A day after President Recep Tayyip Erdogan warned of possible retaliation if the U.S. imposes sanctions over Turkey’s purchase of a Russian missile system, the Pentagon chief suggested the country may have set itself on a collision course with the North Atlantic Treaty Organization. “This is something that the alliance would have to discuss, if the Turks are serious about this,” Esper told reporters on his plane yesterday, according to the Defense Department’s website. Read more from Selcan Hacaoglu.

Pakistan Court Orders Death to Ex-Military Ruler Musharraf: A Pakistani special court sentenced former military dictator and president Pervez Musharraf to death in absentia, ending a six-year long high treason case against him and delivering a historic verdict against the country’s powerful army. In a two-to-one majority, the three-member special court headed by judge Waqar Ahmad Seth announced the verdict, Musharraf’s spokesman Mohammad Amjad said by phone today. Musharraf, who has been in Dubai since 2016 seeking medical treatment and never attended the legal proceedings, has the right to appeal in the Supreme Court, according to former attorney general Ashtar Ausaf. Read more from Kamran Haider.

Washington Is Top Food City Despite Political Indigestion: In an era of polarization, it’s no surprise that one of the biggest firestorms in food this year came out of Washington. Back in January, as the government shutdown affected the White House catering staff, Trump feted the college football champion Clemson Tigers with $3,000 worth of McDonald’s, Wendy’s, and Burger King, served on silver platters.

But it wasn’t for lack of options: Washington is the most exciting food destination in America.

The nation’s capital isn’t the obvious choice for this accolade. The city has a restaurant scene that mirrors its World Series-winning Nationals—a group of underdogs who are fun to watch as they raise their city to championship levels. Kate Krader has more.