The controversy over whether President Donald Trump improperly pressed Ukraine’s leader to investigate Joe Biden and his family gives Democrats a new angle of attack, but one that carries significant risks for the party.

Three House committees announced earlier this month that they were investigating whether Trump used the withholding of military aid as leverage to get Ukraine’s new President Volodymyr Zelenskiy to probe the Bidens — an allegation that has been bolstered by a new whistle-blower complaint from inside the U.S. intelligence community.

Democrats could turn up damaging information about Trump’s dealings with a foreign leader by conducting a full-scale inquiry, but they could also give a lot of additional air time to allegations about Biden, linking their party’s 2020 presidential front-runner to a whiff of corruption, whether or not the evidence backs that up. The last thing Democrats want is another candidate on the defensive, after Trump was able to cast doubt on Hillary Clinton in 2016.

A majority of House Democrats say Speaker Nancy Pelosi and other reluctant Democratic leaders should endorse Trump’s impeachment after months of hesitation. Pelosi has acknowledged that House investigations of Trump may be at a turning point with his refusal to allow Congress to see the whistle-blower’s complaint.

Two Democrats representing swing districts — Angie Craig and Dean Phillips, both of Minnesota — shifted their position toward impeachment yesterday, citing the allegations regarding Trump’s call with Zelenskiy. And seven freshmen Democrats who had not expressed support for impeachment wrote in a Washington Post op-ed published last night that “if these allegations are true, we believe these actions represent an impeachable offense.”

The Democratic caucus will meet this afternoon to discuss how to proceed on the allegations, according to two aides briefed on the meeting. Read more from Billy House. 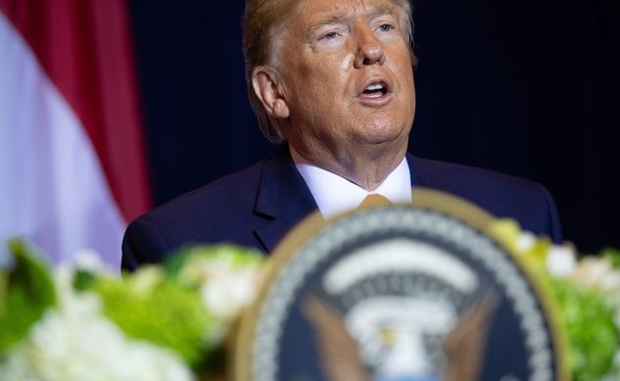 Trump Ordered Delay in Aid Before Call: Trump ordered his acting chief of staff to delay sending $400 million in military aid to Ukraine at least a week before he spoke to that country’s president, a person familiar with the matter said last night, Justin Sink and Josh Wingrove report. Trump’s order to acting Chief of Staff Mick Mulvaney was reported earlier by the Washington Post. Asked about the episode, Hogan Gidley, a White House spokesman, said, “The media pushed the Russia lie for almost three years with no evidence, and now they are doing it all over again. These allegations are completely false, but because the media wants this story to be true so badly, they’ll once again manufacture a frenzy and drive ignorant, fake stories to attack this president.”

Trump to Meet With Ukrainian Leader: Zelenskiy, who’s attending the United Nations General Assembly in New York, said he hopes for a “substantive” meeting with Trump today. “We’ll have a meaningful, substantive meeting,” Zelenskiy said in a statement, highlighting that Ukraine needs the continued support of the U.S. He said he also hoped for progress on resolving the Kremlin-backed conflict in eastern Ukraine, including arranging international talks, Daryna Krasnolutska reports.

Primus used the conference as a platform to push back against claims the bill was socialist and would disrupt innovation. The measure says that research and development costs ”must be compensated for,” Primus said. The National Institutes of Health “whose main job it is to foster development of orphan drugs” would also receive funding through the bill, he said.

Also on this episode, BGOV legislative analyst Michael Smallberg breaks down two bills the House has teed up that would impose additional oversight requirements for border enforcement and immigration detention. Listen and subscribe to Suspending the Rules from your mobile device:
Apple Podcasts | Overcast | Stitcher | Spotify

NYC Gateway May Get Senate Boost: Senate appropriators are including language in their transportation spending bill that’s designed to support the $30 billion trans-Hudson Gateway bridge and tunnel project by allowing New York and New Jersey to count federal loans toward their cost-sharing requirements. The provision in the fiscal 2020 appropriations bill advanced in committee last week is aimed at thwarting the Trump administration’s opposition to the project. It would bar the Federal Transit Administration from enforcing a 201 8 policy, but stops short of provisions in the House-passed version. Read more from Courtney Rozen.

Europeans Side With U.S. on Saudi Issue: Iran’s key European allies distanced themselves from Tehran amid rising tensions with the U.S., saying Tehran was responsible for attacks on Saudi oil facilities earlier this month and calling for an expanded deal to constrain the country’s nuclear and missile programs. In a joint statement on Monday, France and Germany joined the U.K. in saying Iran was behind the attacks on Aramco facilities, adding that “no other explanation is plausible.” The statement comes just days after Secretary of Stat e Mike Pompeo visited Saudi Arabia on what he called a mission to build a coalition to respond to the attacks. Gregory Viscusi, Robert Hutton and David Wainer have more.

Trump Shrugs Off Egypt Protests: Trump said he’s not concerned by protests in Cairo and other Egyptian cities last week, praising President Abdel-Fattah El-Sisi for bringing back stability to Egypt. “Demonstrations? No, everybody has demonstrations,” Trump said during a meeting with El-Sisi on the sidelines of the United Nations General Assembly today. “Egypt has a great leader, he’s highly respected, he’s brought order. Before he was here there was very little order, there was chaos. So I’m not worried about that.” Read more from Josh Wingrove and David Wainer.

Erdogan Wants UN Spot With Trump: Recep Tayyip Erdogan wants to press Trump this week to help deliver two key Turkish security goals in Syria, but he might struggle for the U.S. president’s attention. Turkey is looking to expand a previously agreed zone in northern Syria that’s designed to be off limits to U.S.-allied Kurdish fighters Ankara despises, and which could be used to resettle Syrian refugees who fled to Turkey. The deal was a significant achievement for two administrations often at loggerheads, and Erdogan now hopes to use his personal chemistry with Trump to push his case at the U.N. General Assembly. Read more from Selcan Hacaoglu.

China Says Pompeo Trying to ‘Sow Discord’: China said Pompeo was attempting to “sow discord” with recent comments about its policy toward Muslim Uighurs in its far west region of Xinjiang, treatment that has been widely criticized by foreign governments and rights groups. Pompeo this weekend said Beijing’s campaign against the Uighurs was an “attempt to erase its own citizens” and urged countries to resist China’s demands to repatriate them, Reuters reported. Central Asian countries “know better than the U.S. the real situation in Xinjiang and people there enjoy a harmonious and happy life and religious beliefs,” Chinese foreign ministry spokesman Geng Shuang told reporters in Beijing today. Read more.

China Gives New Waivers for Soy: The Chinese government has given new waivers to several domestic state and private companies to buy U.S. soybeans without being subject to retaliatory tariffs, according to people familiar with the situation. The companies received waivers for between 2 million to 3 million tons, said the people, who asked not to be identified as the information is private. Some firms already bought at least 20 cargoes, or about 1.2 million tons, from the U.S. Pacific Northwest yesterday, the people said. Read more.

Japan-U.S Trade Talks End: Japan and the U.S. have finished talks on a trade deal with no indication yet on how the two sides responded to Trump’s threat to slap tariffs on the $50 billion in cars and parts shipped by Japan to the U.S. annually. Japanese Foreign Minister Toshimitsu Motegi told reporters yesterday in New York that he would explain more about the tariffs in two days’ time after a meeting of Trump and Japanese Prime Minister Shinzo Abe set for the sidelines of the General Assembly. He added that he didn’t think the car tariffs would be a cause for concern. Read more from Isabel Reynolds.

Surging Warren Now a Target: Sen. Elizabeth Warren (D-Mass.) has been on a steady upward trajectory for six months, raising big money from small donors, drawing huge crowds, and rising from also-ran to top-tier. And a new Iowa poll has her in first place. But now she’s a target. Warren has risen to the point where voters and reporters are both scrutinizing her record. She’s also becoming the focus of attacks from rivals concerned about her momentum. Unaffiliated Democrats say Warren’s campaign has consistently impressed them. Read more from Joshua Green.

Group Says Trump May Have Broken Election Law: Trump might have violated election law when he urged his Ukrainian counterpart to investigate Biden, according to complaints filed by a campaign finance watchdog group. Common Cause said that Trump, Giuliani, and other political operatives solicited foreign nationals for campaign help when they asked Ukrainian authorities to reopen an investigation into largely discredited allegations against the Democratic front-runner and his son Hunter Biden. Federal law prohibits foreign citizens from contributing money or other things of value to campaigns. It also bars candidates and their representatives from asking foreigners for such assistance. Read more from Bill Allison.

Meanwhile, the top aviation regulator briefed his counterparts from around the world on the grounded Boeing 737 Max yesterday, reminding them that improvements in both aircraft design and piloting are needed for safety. Newly installed FAA Administrator Steve Dickson pledged in his opening statement yesterday to continue sharing information as the agency assesses Boeing’s proposed fixes for a flight-control system involved in two fatal crashes, off the coast of Indonesia and in Ethiopia. Read more from Ryan Beene and Alan Levin.

Judges Weigh Abortion ‘Gag Rule’ Harm: U.S. appeals court judges wrestled with whether to block the Trump administration’s abortion “gag rule” even though the Supreme Court previously found similar requirements for a family planning program constitutional. “Why would we be free to adopt a different conclusion?” Judge Milan Smith, a George W. Bush appointee, asked about the high court’s 1991 decision on a similar regulation in Rust v. Sullivan. The questioning occurred yesterday during an oral argument before a full panel of 11 judges on the U.S. Court of Appeals for the Ninth Circuit in San Francisco. Read more from Lydia Wheeler.