Republicans are warning House Democratic leaders they’ll sink legislation that would address rising drug prices if they pair it with measures to bolster Obamacare.

House leaders plan a vote this week on legislation combining seven bills that together are designed to bring more low-cost generic drugs to the market, ban short-term insurance policies Democrats deride as “junk” plans, and restore funds for Obamacare programs cut by the Trump administration.

The drug-pricing bills bundled into the package have support from members of both parties, but the ones bolstering the Affordable Care Act are generally backed only by Democrats.

“Those bills all die in the Senate,” Kevin Brady (R-Texas), ranking member of the House Ways and Means Committee, said. “If Democrats want to get something done on drug pricing, they have to work with Republicans.”

On of the bills, the CREATES Act, has been among the most-popular drug pricing measures proposed in recent years. In 2018, 30 senators and 25 congressmen, split evenly among Republicans and Democrats, sponsored the bill. This year, Republicans and Democrats on the House Energy and Commerce Committee agreed to slight tweaks to the measure and unanimously approved it.

But the maneuver makes it “impossible for the bills to be signed into law” because the White House won’t back the Democrats’ legislation bolstering Obamacare, said Rep. Mark Meadows (R-N.C.), a close ally of President Donald Trump. Alex Ruoff has more. 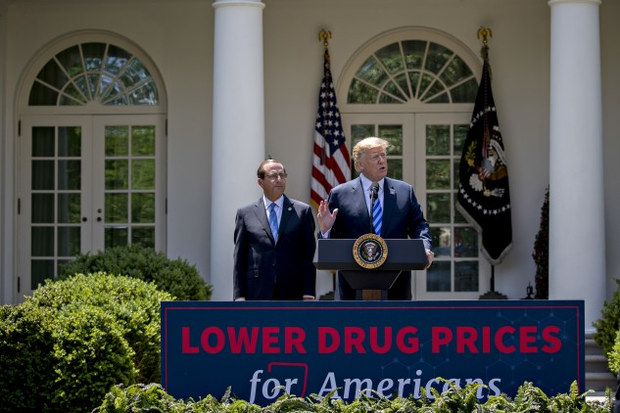 Trump was joined by HHS Secretary Alex Azar to announce plans for lowering drug prices at the White House on May 11, 2018

Trump Drug Pricing Plans: The Congressional fight comes a year after Trump stood up in the White House Rose Garden and promised that drug prices would go down.

The results? Some drug list prices have gone down — particularly for generic drugs. And list price increases for brand drugs are smaller now than they were a year ago. Drug companies and insurers have also made voluntary changes that will lessen costs for some consumers. But it’s not the first time drug makers have held back on price hikes or launched voluntary programs to ease patients’ financial burdens, said Robin Feldman, who researches pharmaceutical economics and wrote the book “Drugs, Money, and Secret Handshakes.” And the trend isn’t guaranteed to continue if government policy changes don’t become final. Read more from Jacquie Lee.

The subpoenas set up what could be one of the biggest legal showdowns between the Trump administration and a Congress intent on investigating the president. Trump broke with 40 years of presidential campaign tradition in refusing to release his tax returns. That has led some Democrats to speculate that he has ties to foreign businesses or cheated on his taxes. Read more from Laura Davison and Andrew Harris.

Nadler Offers to Resume Talks With Barr: House Judiciary Chairman Jerrold Nadler (D-N.Y.) offered to resume negotiating with Attorney General William Barr on releasing Special Counsel Robert Mueller’s full report to Congress two days after his panel voted to hold Barr in contempt. Nadler noted that the House has yet to act on his committee’s resolution to hold Barr in contempt of Congress.

“The committee stands ready to resume the accommodation process to attempt to reach a compromise,” Nadler wrote Friday in a letter to Barr. There is “ample time for further negotiations if the department has any interest” before the House will vote, he said. Read more from Steven T. Dennis.

It would be highly unusual for a president to request an investigation into a political opponent. According to the Mueller report, Trump, met with then-Attorney General Jeff Sessions in the Oval Office in October 2017 and “asked him to ‘take [a] look’ at investigating” Hillary Clinton, his Democratic rival in 2016. Read more from John Harney.

Secretary of State Mike Pompeo made a surprise visit to Brussels today as European Union foreign ministers meet to discuss ways to salvage the landmark Iran nuclear accord that Washington has abandoned.

Pompeo scrapped plans for a brief trip to Moscow, according to a person familiar with his change of plans, and lands in the Belgian capital as his 28 EU counterparts gather. No plans had been set — yet — for meetings with Trump’s top envoy.

The U.K., France and Germany — the three EU signatories to the 2015 nuclear agreement — are struggling to hold the accord in place after Iran last week gave them a 60-day ultimatum to throw the regime in Tehran an economic lifeline. The treaty is on life support a year after the U.S. pulled out of it and piled on fresh sanctions against Iran.

Venezuela Opposition Seeks Contact With U.S.: Venezuelan opposition leader Juan Guaido told an emissary to meet with U.S. military officials in a bid to establish “direct” cooperation, a signal he’s warming to the idea of intervention by force after months of failed attempts to topple President Nicolas Maduro. Guaido told supporters during a rally in Caracas on Saturday that he’s sending his envoy in Washington, Carlos Vecchio, to meet immediately with Florida-based Southern Command, which oversees U.S. military activity in Latin America an d the Caribbean, “to be able to establish a direct and far-reaching relationship in terms of cooperation.” Read more from Ezra Fieser and Andrew Rosati.

Assange Rape Probe Reopened: Swedish prosecutors will reopen a probe into rape allegations against Julian Assange, a move that may wreak havoc with U.S. attempts to extradite the WikiLeaks founder. Authorities want to question Assange over a nine-year-old rape allegation, Deputy Director of Public Prosecutions Eva-Marie Persson said today in Stockholm. She said there was still probable cause to suspect the crime occurred, although the investigation had been shelved while Assange hid in the Ecuadorian embassy in London. The decision to discontinue the investigation was not motivated by a lack of evidence, but by circumstances, she said. Read more from Kaye Wiggins and Niclas Rolander.

China Trade Talks: The emerging stalemate in U.S.-China trade negotiations reflects a breakdown in trust and widening differences that are unlikely to be resolved soon. At the center of the dispute is an earlier deadlock over how and when to remove existing American tariffs that provoked Beijing to threaten to quit the talks, according to people briefed on recent discussions.

Both the U.S. and China tried to project calm since the latest round of discussions ended on Friday and said that they plan to continue negotiations in the hopes of avoiding a tumble in markets and broader economic damage. But that facade masks fundamental divisions, with U.S. officials increasingly convinced that hardliners in Beijing are winning the internal debate on reforms.

Trump continues to weigh in on the state of negotiations, saying the U.S. was “right where we want to be.” In the meantime, Chinese state media blamed the U.S. for the impasse and talked up its economic resilience, with the People’s Daily saying in a front-page commentary that the U.S. should take full responsibility for the setbacks because it went back on its word and imposed more levies. Read more from Shawn Donnan.

Shelton Considered for Fed Board: The White House is considering conservative economist Judy Shelton to fill one of the two vacancies on the Federal Reserve Board of Governors that Trump has struggled to fill.

Shelton has been contacted by the White House regarding the position, according to two people familiar with the matter who described the outreach on condition of anonymity. She declined a request for comment, but on Saturday responded “Thank you, sir” to a tweet from Rep. Jim Banks (R-Ind.), saying she’d be a “great pick” for the central bank.

Shelton, who’s served as an informal adviser to Trump, holds a Ph.D. in business administration with an emphasis on finance and international economics from the University of Utah. She’s currently U.S. executive director for the European Bank for Reconstruction and Development, and previously worked for the Sound Money Project, which was founded to promote awareness about monetary stability and financial privacy. Read more from Saleha Mohsin, Jennifer Jacobs and Margaret Talev.

Biden Pulls Ahead: Just weeks after announcing his presidential run, Biden led the Democratic pack in the key South Carolina race, attracting support from 46% of likely party primary voters in a state poll released yesterday. Biden had more than triple the support of his nearest rival, Sen. Bernie Sanders (I-Vt.), who attracted 15% of those surveyed, according to Charleston’s Post and Courier newspaper, which conducted the poll with Change Research. Read more from Ben Brody.

Cost of Carbon-Neutrality: Democrats from Capitol Hill to the presidential campaign trail see climate change as a winning political issue, and they’re competing to outdo one another with ambitious plans to halt the rise in planet-warming greenhouse gases in the atmosphere over as small as a 10-year period. But is that even possible? Nobody thinks the shift will be easy in large part because emissions are still on the rise, according to the Global Carbon Project, which collaborates with climate groups worldwide on research to quantify greenhouse gases. Global emissions were estimated to have risen 2.7% in 2018 from a year earlier, and 2.5% in the U.S., the group found. Read more from Ari Natter.

Trouble for Gateway: Gateway, the stalled New York City-area rail tunnel, has been called the most crucial infrastructure project in the nation. But the Trump administration ranks the tunnel near the bottom of 37 rated projects vying for federal mass-transit grants and loans. The Transportation Department says New Jersey and New York are relying too much on U.S. taxpayers and uncertain state money for the proposed $12.7 billion commuter link under the Hudson River. Similar issues haven’t hindered transit projects elsewhere, a review of federal project ratings shows. Read more from Elise Young and Mark Niquette.

State Health Effort: Blue states like Connecticut and Washington aren’t waiting for the federal government to reform health care, opting instead to move ahead with proposals to set up state-sponsored coverage. Washington Gov. Jay Inslee (D) is scheduled to sign legislation today that would create a public option set up by the state government. Connecticut could soon follow with its own plan, but it faces stiff opposition from the insurance industry. Read more from Sara Hansard.

July 4th Celebration Moves Ahead: Trump is going full steam ahead on a plan to revamp the traditional Fourth of July celebration in Washington into a more partisan, Trump-focused event, according to the Washington Post. The newspaper, citing administration officials including Interior Secretary David Bernhardt, reported Friday that Trump wants to move the fireworks event from its current location on the National Mall and intends to address the nation from the steps of the Lincoln Memorial. Trump has been receiving “regular briefings on the effort in the Oval Office.” Read more from Ros Krasny.