Speaker Nancy Pelosi (D-Calif.) outlined late yesterday Democrats’ demands for the border funding bill Congress has debated for weeks to respond to a worsening humanitarian crisis on the U.S.-Mexico border.

Pelosi is balancing the demands of her progressive members who want to ensure that federal resources are used to help migrants, with her more moderate members willing to accept the $4.6 billion bipartisan bill passed by the Senate 84-8 yesterday.

There’s a tight timeline for the measure, and Senate Republicans haven’t said whether they’ll accept Pelosi’s changes and pass the bill again this week before Congress recesses until July 9. The House passed its version of the border-funds bill Tuesday, and Pelosi called President Donald Trump yesterday to say House Democrats won’t simply pass the Senate bill.

After meeting with leaders of Democratic factions, Pelosi said her members want to change the Senate version to limit how long children can be held, enforce high standards for “influx” facilities and require immediate notification of any child deaths in U.S. custody. The House released an amended Senate bill early this morning.

Read the text of Democrats’ updated amendment to the Senate bill, released early this morning, here. Read a summary of the amendment from House Democrats here.

The House Rules Committee will meet this morning, ahead of a vote on an amendment to the Senate passed bill. Read more from Erik Wasson. 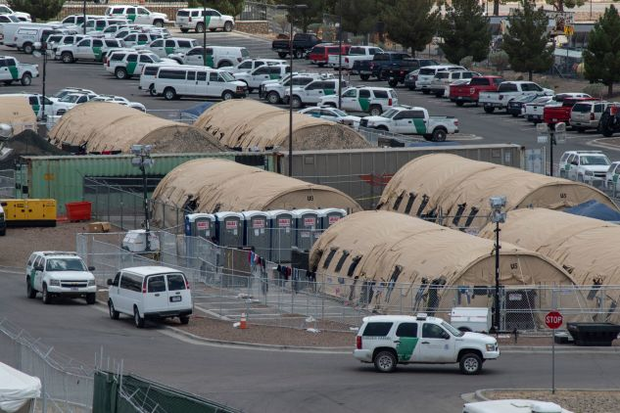 Migrant Conditions: Reports and images of migrants, including children, detained in inhumane conditions and dying en route to the border have underscored the urgent need for short-term relief and long-term changes to U.S. immigration law.

Hastings disputed claims children were not being held in humane conditions, as has been reported by lawyers who inspected facilities in Texas as part of the Flores legal agreement, Michaela Ross reports. Hastings said to remember these lawyers were plaintiffs in a case against the government, to which Sen. Maggie Hassan (D-N.H.) fired back, saying she doubts any attorney would fabricate such information.

Sen. Elizabeth Warren (D-Mass.) stood center stage on the first night of the Democratic debate — and emerged unscathed. Her lower-polling rivals did nothing to knock her off course and didn’t challenge her claim to being the strongest alternative to front-runner Joe Biden.

“None of them have laid a glove on her,” said Mary Anne Marsh, a Boston-based Democratic consultant.

Not once in the two-hour debate in Miami did any of the nine other candidates turn to Warren and challenge her. It was a gift that allowed her to stick to her stump speech and deliver a progressive message to millions of people on everything from the corrosive effect of corporate money to gun control, without getting distracted or having to react to a sharp retort.

In many ways, the debate was fought on Warren’s turf, with a focus on income inequality, busting corporate power and battling Republicans in Congress. She showed her command on policy issues animating the Democratic base, like health care and clean energy, as the party’s voters try to choose a candidate to challenge Trump in 2020.

Tonight, Biden will similarly look to defend his front-runner status when he’s joined by another of the party’s leading progressives, Sen. Bernie Sanders (I-Vt.), along with Pete Buttigieg and Sen. Kamala Harris (D-Calif.).

Biden wasn’t mentioned by name last night, even though the former vice president towers over the field as the candidate to beat. Sanders and Warren are vying for second place. Read more from Sahil Kapur and Tyler Pager.

Data Behind Debate: Warren’s polling dominance did not translate into the most time speaking on Wednesday. Sen. Cory Booker (D-N.J.) and Beto O’Rourke, a former U.S. Representative from Texas—with polling averages of 2.3% and 3.3% respectively, according to RealClearPolitics — spoke longer than Warren. Two candidates polling at 1%—former HUD Secretary Julián Castro and Sen. Amy Klobuchar (D-Minn.) — spoke almost as much as Warren, too. Read more.

Climate Change: Who would best combat climate change was another focus point, as the candidates sought to show leadership on an issue of growing importance to the party’s base in a city on the front lines of the phenomenon, Jennifer A. Dlouhy and Ari Natter report.

Swing-District Democrats Helped GOP: Two dozen of the House Democrats who helped the opposition party notch a victory on a spending-bill amendment represent swing districts that Donald Trump won in 2016. On a motion to recommit the fiscal 2020 financial services appropriations bill (H.R. 3351), all but three Republicans voted yes and were joined by 37 Democrats who voted to increase funding in the bill by $10 million to support the enforcement of sanctions on Iran. Read more from Greg Giroux.

Zuckerberg Says Too Slow on Pelosi Video: Facebook CEO Mark Zuckerberg said Wednesday that Facebook made an “execution mistake” when it didn’t act fast enough to identify a doctored video of Speaker Pelosi last month. Zuckerberg, speaking at the Aspen Ideas Festival, said Facebook should have caught the video sooner, which was edited so that Pelosi looked like she was slurring her words. It took Facebook more than a day to label the video as “fake,” at which point its distribution was limited by Facebook’s algorithms. “It took a while for our systems to flag that and for fact-checkers to rate it as false,” he said. “During that time, it got more distribution than our policies should have allowed.” Read more from Kurt Wagner.

Export-Import Bank Bill Stalled: Disagreement on how to handle trade with China halted the markup of a bill that would reauthorize the Export-Import Bank of the United States, which assists in financing U.S. exports. The House Financial Services Committee needs more time to debate the bill (H.R. 3407) to try to reach a bipartisan agreement, Chairwoman Maxine Waters (D-Calif.), said at the markup. Ex-Im was last reauthorized in 2015 as part of a surface transportation law, and its charter will expire in September of this year. Read more from Elizabeth Elkin.

Senate Privacy Talks Shuffle: Sen. Maria Cantwell (D-Wash.) is stepping away from discussions with a working group of lawmakers crafting federal privacy legislation, but will continue working on the issue, two sources close to the discussions said. Cantwell, ranking member of the Commerce, Science and Transportation Committee, is focusing on bilateral negotiations with Chairman Roger Wicker (R-Miss.), which could complicate efforts to introduce a privacy bill this year. Read more from Daniel Stoller and Rebecca Kern.

Outlook for Tech Data Bill: A bipartisan Senate bill that aims to quantify the value of consumer data likely won’t by itself be enough to tip regulators towards a more aggressive antitrust approach, according to attorneys and economists. Sens. Mark Warner (D-Va.) and Josh Hawley (R-Mo.) say their bill, the Dashboard Act, will help federal antitrust enforcers root out big tech’s anti-competitive practices and potentially stop mergers. Victoria Graham has more.

Trump Arrives at G20: The U.S. and China are headed for an uneasy trade-war truce and a return to the negotiating table. While financial markets may cheer such a breakthrough, the celebrations may be short-lived when the long path to a deal is considered. If Trump and China’s Xi Jinping announce a new round of talks Saturday, as expected, any optimism ought to be balanced with a healthy dose of reality. The talks collapsed six weeks ago not over a few lines of fine print, but over fundamentally different worldviews t hat have only hardened since then.

Heading into a meeting at the Group of 20 summit in Japan starting tomorrow, the world’s largest economic engines have a relationship that’s now more strained and colored by mistrust than it has been at any time during Trump’s presidency. The two sides have had little contact during the stalemate, and plans for this week’s meeting between the leaders have come together in a flurry of last-minute phone calls. “The Chinese economy is going down the tubes,” Trump told Fox Business Network yesterday . “It’s possible we’re going to make a deal, but I’m also very happy where we are now.” Read more from Shawn Donnan, Jenny Leonard and Peter Martin.

Meanwhile, Trump called on India to withdraw an “unacceptable” increase in tariffs on U.S. goods, ratcheting up tension against the Asian nation before a planned meeting with Prime Minister Narendra Modi. “India, for years having put very high Tariffs against the United States, just recently increased the Tariffs even further,” Trump said in a Twitter post, his first direct response to India’s move earlier this month to raise tariffs on a slew of products from walnuts to pulses. Read more from Karthikeyan Sundaram.

Huawei Personnel Worked With China Military: Several Huawei Technologies employees have collaborated on research projects with Chinese armed forces personnel, indicating closer ties to the country’s military than previously acknowledged by the smartphone and networking powerhouse. Over the past decade, Huawei workers have teamed with members of various organs of the People’s Liberation Army on at least 10 research endeavors spanning artificial intelligence to radio communications. They include a joint effort with the investigative branch o f the Central Military Commission to extract and classify emotions in online video comments, and an initiative with the elite National University of Defense Technology to explore ways of collecting and analyzing satellite images and geographical coordinates. Read more from Bloomberg News in Asia.

Iran Set for Nuclear Breach : Iran is set to breach the 2015 nuclear deal for the first time today, piling pressure on European powers attempting to salvage it from crippling U.S. sanctions and avert a slide toward war. Iran’s atomic energy agency has said the country will probably exceed a cap on stockpiles of low-grade uranium on June 27, and could early next month raise enrichment purity beyond a 3.67% limit put in place to prevent Iran from making weapons-grade material. Read more from Jonathan Tirone, Ladane Nasseri and Golnar Motevalli.

Meanwhile, Iran could opt out of a voluntary agreement with the International Atomic Energy Agency that allows the nuclear watchdog to conduct snap inspections of facilities, a senior lawmaker said. As next steps, Iran could stop adhering to the Additional Protocol on stricter nuclear inspections and increase the number of centrifuges it operates, Mojtaba Zolnour, head of the parliament’s national security and foreign policy committee, was cited as saying by the Mizan news agency. Read more.

‘Ominous’ Sign in Fight to Save ACA: Democrats seeking to save Obamacare from oblivion were asked by a federal appeals court to explain why they should be allowed to defend the national health-care plan in court if the Trump administration won’t. The U.S. Court of Appeals in New Orleans, with a high-stakes July 9 hearing approaching, posed the question in a brief notice yesterday to the Affordable Care Act’s last defenders: a group of Democratic state attorneys general, led by California, and the Democratic-led House. Read more from Erik Larson.

Military Athletes: Trump has issued an order allowing new graduates of the military academies to pursue professional sports immediately after graduation instead of requiring them to serve 2 years of commissioned service first. Trump did a 180 on the issue last month after opposing legislation two years ago by the late John McCain (R-Ariz.) that would have allowed military athletes to sign up with professional sports leagues by skipping active duty.