Democratic lawmakers decried a plan by the Homeland Security Department to transfer $271 million toward detention and migrant processing from the Federal Emergency Management Agency and the Transportation Security Administration, among others.

The reprogramming includes $155 million taken from FEMA’s Disaster Relief Fund to be shifted to a program that returns asylum seekers to Mexico to await their immigration court proceedings, according to a document obtained by Bloomberg Government. The plan also includes $116 million to add more beds for migrants and for transportation and removal by Immigration and Customs Enforcement, the reprogramming notification said.

The news comes as Tropical Storm Dorian approaches Puerto Rico and Florida and is predicted to reach hurricane strength.

Democrats in Congress in recent years have railed at a pattern by the Trump administration to spend more than lawmakers appropriated for immigration enforcement. In June, Congress cleared a $4.6 billion emergency budget package to support border operations and provide more humanitarian care to migrants, but omitted the administration’s request to increase beds at ICE.

“Taking money away from TSA and from FEMA in the middle of hurricane season could have deadly consequences,” House Homeland Security Chairman Bennie Thompson (D-Miss.) said in a statement. “This is reckless and the Administration is playing with fire – all in the name of locking up families and children and playing to the President’s base leading up to an election year.” Read more from Michaela Ross and Jack Fitzpatrick 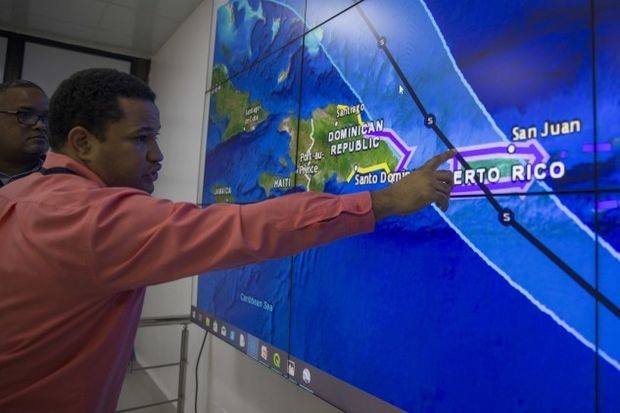 Dorian Set to Menace Puerto Rico: Meanwhile, Tropical Storm Dorian will likely wash over central Puerto Rico today, with heavy rains that could flood low-level areas but not the exceptionally high winds seen two years ago with Hurricane Maria. Forecasters say it remains an open question whether Florida could eventually be threatened come the weekend. Ports in St. Croix in the U.S. Virgin Islands and Puerto Rico were planned to be shut today as Dorian approaches, the U.S. Coast Guard said in a statement.

President Donald Trump yesterday approved Puerto Rico’s emergency declaration and ordered federal assistance for the territory to support local response efforts, according to a White House statement. Trump earlier yesterday tweeted about the storm and Puerto Rico’s recent history of damage from hurricanes. “Wow! Yet another big storm heading to Puerto Rico. Will it ever end?” Trump tweeted yesterday.

Lack of Opioid Abuse Resources Draws GOP Ire: House Republicans want to know why the Department of Health and Human Services hasn’t established an online dashboard that would help local officials and communities find resources to combat the opioid crisis. Republican leaders of the House Energy and Commerce Committee are asking HHS Assistant Secretary for Health Brett Giroir for a briefing to get more information about implementation of the dashboard, according to a letter first obtained by Bloomberg Law.

Some communities have struggled to get access to federal opioids funding and to find information about substance use disorders.

This dashboard “is a much-needed tool for the patients and families we represent, and it will help further turn the tide in our fight against this crisis,” Reps. Greg Walden (R-Ore.), Michael Burgess (R-Texas), Robert Latta (R-Ohio), and Brett Guthrie (R-Ky.) said in the letter. Read more from Shira Stein.

Hospitals have gotten less public attention on Capitol Hill than other players in the health industry—like pharmaceutical companies and drug middlemen. That could be changing as lawmakers ponder legislation to end surprise hospital bills, transparency initiatives gain steam, and debt collection against patients gets more attention. Read more from Jacquie Lee.

Climate, PFAS Provisions Factor in Defense Negotiations: Congress will return the week after Labor Day needing to find a speedy compromise between House and Senate versions of an annual defense bill that take different approaches on climate change and potentially hazardous nonstick chemicals. House and Senate negotiators are expected to formally begin ironing out differences between the fiscal 2020 defense authorization bills shortly after Congress returns the week of Sept. 9, though informal “pre-conference conversations” are underway, a Senate Armed Services committee aide said.

The House and Senate have both passed their own bills that address exposures to chemicals known as PFAS, or per- and polyfluoroalkyl substances. But the Democratic-controlled House’s version designates those chemicals as hazardous under the nation’s Superfund law, which would open the door to much more expansive regulation than the Senate bill. Dean Scott takes a closer look at the issue.

Crypto Lobby Fights to Contain Libra Backlash: Facebook’s Libra is already in the firing line of regulators and lawmakers. Backers of other cryptocurrencies are now fighting to ensure the fusillade doesn’t take them down, too. Crypto lobbyists are trying to convince lawmakers that efforts to slow or stop Facebook’s virtual coin shouldn’t apply to Bitcoin and other older digital currencies. The lobbying will take on new urgency during the coming weeks, as lawmakers return from recess and renew efforts to define and rein in Libra.

“What we don’t want to happen is members of Congress for the first time come in and author legislation that aims to go after Facebook and inadvertently takes out the other part of the industry,” said Kristin Smith, director of the Blockchain Association, a trade group that represents several large cryptocurrency companies, including some also involved in Libra. Read more from Joe Light.

2020 Democrats’ Climate Plans Face Senate Peril: Democratic presidential candidates are jousting over who best can save the planet. But even if one of them wins the White House, the Senate would threaten to scuttle any action to ease the effects of climate change. If Democrats fail to win the Senate, Senate Republican leader Mitch McConnell (R-Ky.) is expected to block even incremental steps to limit carbon emissions — forget the ambitious Green New Deal proposed this year that calls for eliminating fossil fuels by 2030.

Even so, Democratic candidates are forging ahead with their proposals because climate change is a top issue among primary voters and they hope to shift the national conversation in their direction. Yet some worry that the voters aren’t paying enough attention to congressional races that are critical to moving climate legislation. Read more from Sahil Kapur.

Fox News Ads From Farmers, Airlines Target Trump: Farmers seeking government assistance knew where to make their case: on Fox News, in TV ads with tractors and corn stalks designed to snag the attention of Trump. U.S. airlines, opposed to subsidies for foreign competitors paid by Qatar, took the same broadcast route to the viewer-in-chief, urging him to oppose “trade cheating.”

While the ads generate a small portion of the network’s income — many are local spots airing only in Washington — the phenomenon points to the unusual symbiosis between a conservative president and conservative news programs that boosted his political fortunes. Trump’s penchant for sharing his viewing habits with regular tweets to his millions of followers in turn helps drive viewers to the shows. Read more from Todd Shields and Jennifer A. Dlouhy.

Facebook Updates Political Ads Rules Ahead of 2020: In a blog post by Katie Harbath, public policy director for Global Elections, and Sarah Schiff, product manager, Facebook shared additional steps it is taking to prepare for the 2020 U.S. election. The steps include “strengthening the authorization process” for U.S. advertisers and showing people more information about each advertiser Under new disclaimer requirements, Facebook says advertisers in the U.S., who must place a “Paid for by” disclaimer on their ads, have attempted to put “misleading” disclaimers on such ads, Nick Lichtenberg reports.

Trump Mocks GOP Rivals as ‘Three Stooges’: Trump, though overwhelmingly favored to win the Republican nomination in 2020, ridiculed three GOP opponents who are running or might run against him as the “Three Stooges.”

“Can you believe it? I’m at 94% approval in the Republican Party, and have Three Stooges running against me,” Trump tweeted last night. “One is ‘Mr. Appalachian Trail’ who was actually in Argentina for bad reasons. “Another is a one-time BAD Congressman from Illinois who lost in his second term by a landslide, then failed in radio,” Trump wrote. “I should be able to take them!”

Joe Walsh, a radio commentator and former congressman from Illinois announced on Sunday that he would challenge Trump. The Argentina crack was an apparent reference to Mark Sanford, who finished his second term as governor of South Carolina under a cloud after the revelation of an extramarital affair with an Argentine woman. His office tried to explain his absence by claiming that he was “hiking the Appalachian trail.” Trump also seemed to refer to former Massachusetts Governor Bill Weld, who ha s been running since April. Read more from John Harney.

Dream Team Pushes HHS Policy: The power center of the Department of Health and Human Services in the Trump administration turns out to be an office full of attorneys. The Office of the General Counsel—which has been in existence for more than half a century—has added more than 100 lawyers since Trump took office and become more willing to risk lawsuits to push through policy changes under HHS Secretary Alex Azar, an alumnus of that office. The newly aggressive approach emulates legal strategies employed by the Labor Department and Environmental Protection Agency among other agencies. Read more from Shira Stein.

States Stepping Up on Drug Price Laws: States are sending a clear message to Capitol Hill when it comes to drug price legislation: If you won’t, we will. Maryland and Maine are leading the charge most recently with drug price packages including drug advisory boards that mirror the controversial groups overseas that help countries decide how much they’re willing to pay for expensive medicine. Maryland last month became the first state to establish a board to set maximum prices for drugs purchased by state and local governments. Maine quickly followed suit with its own board. Read more from Jacquie Lee and Alex Ruoff.

California’s Efforts to Tame Big Tech: California Attorney General Xavier Becerra has sued the Trump administration more than 50 times since 2017, in disputes ranging from clean air standards to immigration policy. There’s one issue the state’s chief law enforcer and the administration may find common ground on, though — the need to rein in Big Tech.

Becerra agrees with the Justice Department, Federal Trade Commission and progressives in his Democratic Party on the need to probe the tech industry. He does so knowing that technology companies account for an estimated $482 billion – or 19 percent – of California’s economy. “These are no longer startups, some college kids in their garage, these guys are major players. So absolutely there is a need for scrutiny,” Becerra said in an interview with Bloomberg Law in his downtown Sacramento office, 120 miles northeast of Silicon Valley. Read more from Victoria Graham.

Saudi Ruler Sends Brother to U.S. as Trump Wavers on Iran, Yemen: A younger brother of Saudi Crown Prince Mohammed bin Salman is in Washington this week, with Trump’s evolving policy toward Iran and Yemen expected to be on the agenda for talks with the administration. Deputy Defense Minister Khalid bin Salman’s visit comes days after Trump signaled new openness to potential talks with Saudi Arabia’s chief regional rival, Iran, and a report that the U.S. is looking to enter talks with Iran-backed Houthi rebels in the festering war in Yemen.

The Saudi Press Agency said Prince Khalid “will meet a number of officials to discuss bilateral relations and issues of common concern that support the security and stability of the region,” without providing specifics on meetings planned with administration officials. Read more from Glen Carey.