She didn’t — and neither did anyone else.

Over the next 150 minutes, a more engaged Biden took punches from his Democratic rivals but proved that he could also counter-punch on health care, immigration and criminal justice.

Biden’s debate performance, which followed weeks of intense closed-door rehearsals, sought to put to rest the questions about whether he was prepared enough to be the Democratic standard-bearer in 2020.

After being caught off guard by attacks in the June debate, Biden yesterday repeatedly took refuge in the mantle of his former running mate, President Barack Obama.

“I find it fascinating, everybody is talking about how terrible I am on these issues,” he said. “Barack Obama knew exactly who I was. He had 10 lawyers do a background check and everything about me on civil rights and civil liberties and he chose me and he said it was the best decision he made. I trust his judgment.” Read more from Jennifer Epstein and Gregory Korte. 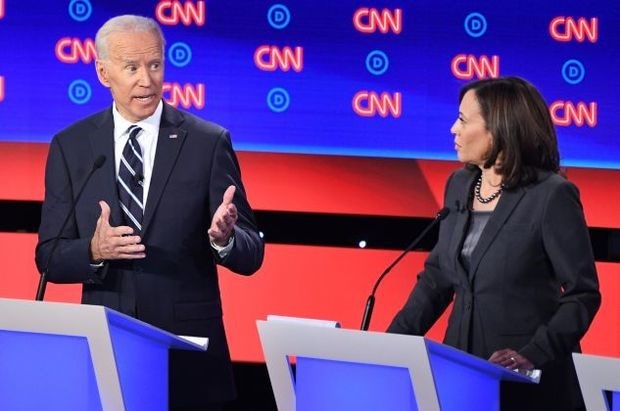 Health Care Feud: Over two nights this week, the 20 candidates spent at least an hour fiercely arguing over health-care plans, most of which are significantly more expansive than what the party enacted a decade ago in the Affordable Care Act. It’s a sign of how important the issue will be in the bid to unseat Trump, and how the party’s position has shifted leftward. Read more from John Tozzi.

Debate Takeaways: While the first night of the debates on Tuesday hinged on clear ideological divides between the progressive and moderate wings of the Democratic Party, the candidates on stage last night focused more on the nuances of their policy proposals. Tyler Pager, Misyrlena Egkolfopoulou and Emma Kinery highlight their key takeaways from the debate.

Happening in the Senate

Senators expect to pass the measure, saying the bill’s fate has never really been in doubt despite delays leading up to today’s final vote. The bill was set back temporarily by a series of votes on judicial nominations and uncertainty over support from Senate Democrats running for president, senators said. McConnell also faces the challenge of persuading Republicans to support the measure despite their concerns over boosting spending and the debt limit, Jack Fitzpatrick reports.

The House passed the measure 284-149. Among Republicans 65 members supported it and 132 opposed. That two-to-one ratio of GOP opposition-to-support makes for a tricky vote in the Senate, where Republicans hold the majority.

Senate Confirms Judicial Nominees: A large package of nominees that the Senate may clear today could include a list of long-delayed district court picks that Democrats want, including some from the home state of Minority Leader Chuck Schumer (D-N.Y.). Lawmakers said McConnell is expected to bring the package to the floor as one of the last items of business before a five-week recess. The package would be approved without a roll call vote.

Schumer acknowledged frustration that many of the judges that he and Sen. Kirsten Gillibrand (D-N.Y.) want were not included in a list of nominees that McConnell scheduled for floor action in recent days. But he said in an interview he is still pushing the matter. “Well, we’ll see,” Schumer said when asked if the New York judges might still get approved. “They’re on a list and they stopped right before our judges and hopefully we can move forward.” Read more from Nancy Ognanovich.

Senate Confirms Craft as UN Ambassador: The Senate yesterday voted to confirm Kelly Craft to be U.S. ambassador to the United Nations. Craft was a prominent donor to Trump’s 2016 campaign, and Democrats have questioned her qualifications for the role. She succeeds Nikki Haley, who left the post in December, Catherine Dodge reports.

Hyten Advances Amid Assault Claim: The Senate Armed Services Committee advanced the nomination of Air Force Gen. John Hyten to be the second-highest ranking U.S. military officer amid a sexual-assault allegation against him. The panel yesterday voted 20-7 to approve Hyten as vice chairman of the Joint Chiefs of Staff. The panel held Hyten’s confirmation hearing on Tuesday and several lawmakers publicly concluded the claim of assault was false. Read more from Roxana Tiron.

Ex-McConnell Aides Tied to Russian-Backed Project: Two former top aides to McConnell have lobbied Congress and the Treasury Department on the development of a Kentucky mill backed by Russian aluminum company Rusal, Politico reports, citing a lobbying disclosure. It’s not clear if the ex-staffers, Hunter Bates and Brendan Dunn, directly lobbied McConnell’s office. Akin Gump Strauss Hauer & Feld, the firm where Bates and Dunn work, and McConnell’s office declined comment on whether they had done so, Politico reports.

Democrats are pushing the Trump administration to look at Rusal’s $200 million investment in the Kentucky project over concern the aluminum mill will supply the Defense Department. McConnell has faced criticism for helping block a congressional effort to stop the investment in his home state, Politico reports.

Grassley Targets Controversial Land Deals: The Senate’s top tax-writer said that he still hasn’t gotten all the information he requested from those involved in controversial tax-advantaged land preservation deals known as syndicated conservation easements. “We are going to continue to seek it and we will get it one way or the other,” Finance Chairman Chuck Grassley (R-Iowa) said yesterday. Grassley demurred when asked if the panel would issue subpoenas to get the documents he and ranking member Ron Wyden (D-Ore.) are seeking.

Committee rules specify that subpoenas for documents can be issued by the chairman with agreement of the ranking member or by a majority committee vote. A subpoena would represent a substantial escalation on the part of the lawmakers. Read more from Kaustuv Basu.

Finance Panel Approves Treasury Nominees: The Senate Finance Committee yesterday advanced three nominees for the Treasury Department and a U.S. tax court nominee, readying them for consideration by the full chamber. Brent McIntosh, the nominee for Treasury undersecretary for international affairs, was approved on a 15-13 vote during a meeting held off the Senate floor, according to a committee staffer. Brian Callanan, who would serve as Treasury general counsel, advanced on a 17-11 vote. Read more from Kaustuv Basu.

Trump to Name Spicer to Naval Academy Board: Trump intends to name his former press secretary Sean Spicer to the U.S. Naval Academy’s Board of Visitors, the White House said in a statement. Spicer resigned as Trump’s chief spokesman in July 2017. He earned a master’s degree at the Naval War College and serves in the U.S. Navy Reserve, Greg Sullivan reports.

Trump also intends to nominate Kendel Ehrlich to be deputy director of the Office of National Drug Control Policy. Ehrlich currently serves as associate director of External Affairs at the White House’s drug control office, where she manages the public appearances and media engagements for Director Jim Carroll and helps to coordinate drug policy efforts, according to the statement.

U.S., China Diplomats Meet: Chinese Foreign Minister Wang Yi stressed the importance of cooperation with the U.S. following talks with Secretary of State Michael Pompeo, one day after the latest negotiations in Shanghai yielded incremental signs of concrete progress in their trade war. Today’s meeting on the sidelines of a regional forum was expected to be chilly, but the readout from China was low-key and mostly focused on North Korea. Wang said Beijing supports the continuation of “step-by-step” U.S.-North Korea talks with the aim of full denuclearization.

Pompeo described the talks as an “in-depth exchange of views” on U.S.-China relations and North Korea, tweeting “when it advances U.S. interests, we are ready to cooperate with China.” He’s been one of the Trump administration’s most prominent critics of China. During a similar sitdown in Beijing last year, Wang delivered an unusually public rebuke to Pompeo and accused the U.S. of undermining mutual trust between the countries. Read more.

Barrack Snagged Saudi Money After Trump Transition Meetings: Tom Barrack, the investor and longtime friend of Trump, was an early advocate of strengthening ties between the White House and Saudi Arabia. Now his firm, Colony Capital, is doing business with the kingdom’s sovereign wealth fund.

When Colony decided to invest in digital infrastructure such as cellphone towers and data centers after Trump’s election, it brought in the kingdom’s Public Investment Fund, according to people familiar with the matter. Colony worked with another firm, Digital Bridge, to form a $4 billion investment vehicle that closed in June. Since then, Colony has decided to acquire Digital Bridge of Boca Raton, Florida. The size of the Saudi investment, not reported previously, hasn’t been disclosed. Read more from Caleb Melby and Gillian Tan.

Afghan Troops Are Shorthanded: Afghanistan’s army remains seriously shorthanded, a Pentagon watchdog found, as the Trump administration tries to negotiate a peace agreement with the Taliban enemies of the government in Kabul. The Afghan army, air force and national police were almost 79,535 people short of their target of 352,000 personnel in the quarter ending in May, according to a report issued late yesterday by the U.S. Special Inspector General for Afghanistan Reconstruction, or SIGAR. Read more from Glen Carey.

U.S. Sanctions Iranian Foreign Minister Zarif: The U.S. Treasury Department imposed sanctions on Iran’s Foreign Minister Javad Zarif yesterday amid tensions between the U.S. and the Islamic Republic. Zarif, who has been Iran’s foreign minister since 2013, was the country’s top negotiator in the international nuclear deal reached in 2015 Trump has since abandoned. The announcement follows sanctions against Iran’s supreme leader, Ayatollah Ali Khamenei, just weeks ago. Following those penalties, Iran said the path to negotiations was closed. Read more from Joshua Gallu.

Awards Said Pulled for SEAL Case Prosecutors: Trump said he ordered the Navy to rescind achievement awards given to two military lawyers who prosecuted a SEAL that many conservatives said was wrongly accused of war crimes. The SEAL, Eddie Gallagher, was found not guilty of murder in July. He faced multiple charges, including that he killed a teenage combatant for Islamic State in 2017. Trump alleged both prosecutors engaged in misconduct in Gallagher’s case, Alex Wayne reports.

Trump Offered Putin Wildfire Help: Trump called Russian President Vladimir Putin yesterday to offer U.S. help fighting Siberian wildfires, the Kremlin said in a statement. Putin thanked Trump for the offer but said a group of airplanes had been formed in Siberia to fight the fires, according to a translation of the statement. Putin said that Trump’s call was a signal that “in the future, it will be possible to restore full-format relations between the two countries.” The White House later confirmed the call and said that the two leaders also discussed trade. Read more from Ilya Arkhipov and Josh Wingrove.