Axne (Iowa) is one of 30 Democrats seeking re-election in a district President Donald Trump carried in 2016, and the party’s ability to hold the majority next year depends on their collective success. 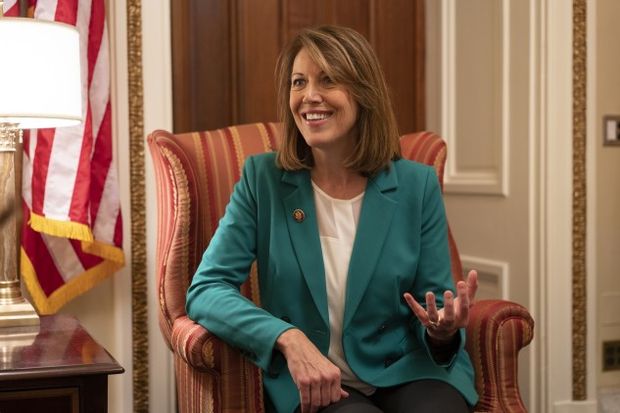 In interviews with 14 of them, many attributed their 2018 wins to focusing on local issues and connecting with voters in their districts. But in 2020, those district-specific messages are at risk of being drowned out by high-decibel national narratives, including impeachment and the presidential election, both of which have provided the House Republican campaign arm with ammo to paint vulnerable incumbents as partisan and tie them to liberal policy proposals.

“The more time we spend talking about principles that don’t have public support, and explaining to people that I don’t support that, is time I’m not able to talk about suicide prevention and air quality and fiscal responsibility and balanced budgets,” said Rep. Ben McAdams (D-Utah), referring to policies such as Medicare for All and the Green New Deal.

Lawmakers trying to localize their races isn’t new, said former Rep. Steve Israel, who was chairman of the Democratic Congressional Campaign Committee from 2011 to 2014. But it’s more difficult to do in a hyper-partisan arena.

“If you’re a Democrat in one of the 30 House districts that President Trump won, you have a real challenge in developing a message that is attuned to a local political environment,” Israel said. “But you just have to do it.”

Several Republican strategists pointed to impeachment as a main hurdle for Democrats facing tough re-elections. Because there’s no middle ground, it forces them to pick a side on an issue splitting the country.

“The impeachment thing really messes up this whole situation for them,” said Guy Harrison, a former executive director of the National Republican Congressional Committee. “It’s an easy thing their challengers can point to, to show that they’re partisan.“

In a memo sent to members last month, the DCCC sought to reassure vulnerable freshmen that the impeachment inquiry has majority support nationally and breaks even in battleground districts. Members were advised to focus on Trump’s abuse of power and their constitutional duty to be a check on the president.

“They’re in tough districts, they’re working hard, and we need to help them as much as we can,” House Majority Leader Steny Hoyer (D-Md.) told reporters Wednesday.

During a recent town hall in Burlington County, N.J., where the focus was on Afghanistan, Rep. Andy Kim (D-N.J.) fielded several questions on impeachment from constituents. Afterward, Kim said he was trying to convey that the impeachment inquiry was bigger than partisan politics.

“We really have to show folks that we’re doing this for them, for our country, for our Constitution,” Kim said in an interview. “If they think we’re doing this in terms of politics, I think they’ll see right through it. That’s the kind of stuff people hate.”

The lack of bills clearing a divided Congress has become an NRCC talking point, as it claims Democrats have abandoned campaign promises in favor of ousting Trump.

“We are going to remind voters day in and day out that that’s what these House Democrats are doing with their majority,” NRCC spokesman Michael McAdams said. “Democrats are too obsessed with impeachment to get anything done.”

House Democrats have passed hundreds of bills, including on background checks for gun purchases and election security enhancement, and are soon expected to pass others on voting rights and lowering prescription drug prices. Yet few of those measures will become law, thanks to the Republican-controlled Senate.

“People do see that we are passing bills, but they don’t see those bills turning into laws and changing their lives,” Rep. Elissa Slotkin (D-Mich.) said. “That’s always a very difficult thing to explain.”

The Trump-district Democrats can do little to control the impeachment inquiry or what bills Senate Majority Leader Mitch McConnell takes up, but there are other ways to highlight their effectiveness.

Democrats doubled the number of town halls held in the first nine months of 2019 compared to the same time period in 2018, according to the Town Hall Project, a website that crowd-sources town halls. A third were held by the freshmen, who make up a fifth of the House.

Another key is to have some concrete examples of ways they have helped their district, said Ian Russell, a former DCCC deputy executive director who worked at the committee during the 2014 elections. That was a favorable year for Republicans and when more than 40 freshman Democrats defended seats.

“The ones that survived really doubled down on constituent services and showed they had never forgotten why they went to Washington,” he said.

One method to boost these Democrats is grant funding, such as $5.4 million for updating and repairing roads in Rep. Abby Finkenauer‘s Iowa district and $1.3 million for firefighters in Rep. Haley Stevens’ Michigan district. They can also be more unconventional: Rep. Max Rose (D-N.Y.) called for the U.S. Postal Service to upgrade mailboxes in his South Brooklyn and Staten Island district to prevent stealing letters, and Rep. Josh Gottheimer (D-N.J.) pushed federal and local agencies to investigate a man illegally dumping solid waste in rural New Jersey, which ultimately led to an arrest and fine.

Rep. Sean Patrick Maloney (D-N.Y.), who has won his competitive seat four times, said constituent services are “where you really make your bones as a new member of Congress.”

“It’s not glamorous,” he said, “but when you show up with several hundred thousand dollars to fight an invasive pest known as the allium leafminer that is threatening the onion crop in Orange County, people know what you’re doing and they know it has a connection to them.”