Former White House press secretary Sean Spicer and two other Trump campaign and administration veterans were part of a dinner hosted at the Trump International Hotel by lobbyists for then-Ukraine presidential contender Volodymyr Zelenskiy shortly before his election victory, according to interviews and newly filed disclosures with the Justice Department.

Spicer, Mike Rubino, a consultant and former Trump campaign official, and Matt Mowers, a former State Department official who left the government in March, attended the event put on by lobbyists with the Signal Group on April 16 at the Washington hotel.

The dinner, which gathered a dozen people in the BLT Prime restaurant on the second floor of the Trump International Hotel, provides a glimpse into how the influence industry operates, complete with lucrative clients and calling in high-profile friends to demonstrate value.

The former Trump officials described their attendance as brief or inconsequential and done at the behest of a friend at the firm.

“I attended as a favor, to fill a table. There is nothing to this,” Rubino said in a telephone call. “It wasn’t like I was attending to do anything. I had filet mignon and that was it, I went home.” 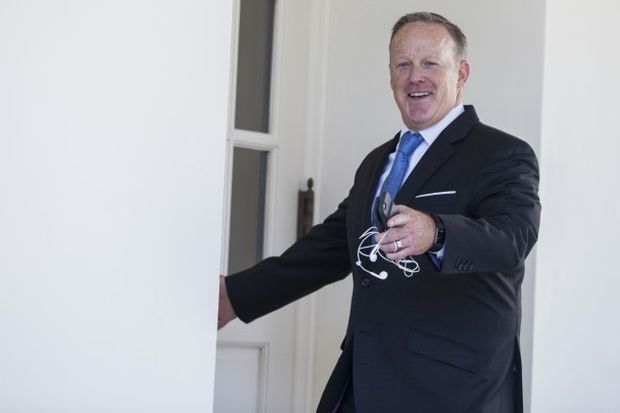 Spicer said he showed up only for a few minutes on the way to another event, as a courtesy to Rubino and a friend at Signal, to “say hello and that’s it.”

“I can’t even recall who I was introduced to or what they did,” he added, referring to people from the Zelenskiy campaign. Mowers also said he only stopped by for a portion of the dinner. Zelenskiy did not come with the delegation to the U.S.

The previously undisclosed details about who attended the dinner came to light this week with new filings by Marcus Cohen, a U.S lawyer who paid for Signal Group’s lobbying effort. Cohen, a trade specialist who worked for the Commerce Department more than a decade ago, listed at least two contacts not disclosed by Signal, noting that he had attended those meetings with people from the firm.

Signal Group represented Zelenskiy and the Servant of the People Party from the beginning of April through Zelenskiy’s inauguration on May 21, in a public relations effort to raise his profile in the U.S., according to disclosures. The firm was paid $60,000 plus $9,371 in expenses, according to its filings. The April 16 dinner ended up costing Cohen more than $1,900, but a larger chunk of those expenses went toward translation services.

Signal Group “did not believe at the time of our filing that these interactions met the reporting requirement,” said firm spokesman John Procter. “However, in the interest of transparency, the firm will be submitting a supplemental amendment in the days ahead.”

Communications by President Donald Trump, other U.S. government officials and Trump’s personal lawyer, Rudy Giuliani, with Zelenskiy and the Ukrainian government are at the heart of the impeachment inquiry led by congressional Democrats. The House is probing allegations that the president pressed for an investigation into former Vice President Joe Biden and work his son, Hunter, had done on the board of a Ukrainian natural gas company.

“Signal Group facilitated a number of meetings for Mr. Cohen and the Servant of the People campaign in Washington. At no time during the delegation’s April visit was there any mention of an investigation of the Biden family or any related topic,” Procter said.

Cohen, who notes he advised the campaign, including on anti-corruption issues, suggests in his foreign agent registration filing that he was interested in working for Zelenskiy. “These efforts were made with the hope (but not expectation) that any eventual new Ukrainian administration might formally hire Registrant for a position within the Government,” the filing says.

Disclosures also say that Ivan Bakanov, Zelenskiy’s childhood friend who now serves as the head of the State Security Service of Ukraine, was Cohen’s point of contact in his relationship with Zelenskiy.

Cohen did not return a phone call for comment.

In addition to the previously undisclosed meeting with Trump officials, Cohen and the firm had also been in contact with former New Mexico Gov. Bill Richardson (D), a former ambassador to the United Nations and former Energy Secretary during the Clinton administration. A spokeswoman for Richardson said that the former governor had a phone call with Zelenskiy’s campaign delegation “as a private citizen with vast experience in both international diplomacy and domestic issues.”

“During the brief call, he encouraged Mr. Cohen and the delegation to commit to ongoing bipartisan engagement following the success of their initial visit. There was no mention of any investigation of the Biden family or related topics raised,” Maddy Mahony, Richardson’s spokeswoman, wrote in an email.

It’s not clear what was discussed at any of the meetings organized by the Signal Group, and Cohen simply describes them as regarding “U.S.-Ukraine relations” on his forms.

Zelenskiy has denied working with any lobbyists in the U.S., according to Radio Free Europe. “I didn’t ask anyone for anything, nobody offered me anything, I didn’t pay anyone, I didn’t take anything from anyone. I’m my own lobbyist,” Zelenskiy told the outlet in August.

Signal Group had amended its disclosures about the Zelenskiy campaign work at the end of September to provide the names of people at think tanks, media outlets and the U.S. government contacted by the firm on its client’s behalf.

At a meeting at the White House, lobbyists talked with Alexander Vindman, National Security Council director in charge of European Affairs who accompanied with a presidential delegation led by Energy Secretary Rick Perry to Ukraine for Zelenskiy’s inauguration on May 21.

The Ukrainian delegation also had a breakfast meeting in April with former Sen. Norm Coleman (R-Minn.), now a lobbyist at Hogan Lovells. Coleman told Bloomberg Government in an email that he took the meeting as a potential business development endeavor.

There was “some discussion of regional issues and how Congress works in a divided government,” he said, adding, “There was no follow up or further contact.”

To contact the editors responsible for this story: Bennett Roth at broth@bgov.com; Jodie Morris at jmorris@bgov.com