For Emma Shinn, a transgender woman serving in the U.S. Marines judge advocate legal corps, the debate over President Donald Trump’s ban on military service by people like her is more than a typical Washington policy dispute.

“With a lot of people who were seeking to join the military it feels like the rug got pulled out from underneath them,” said Shinn, who also heads the board of directors for Sparta, an advocacy group for transgender service members.

Lawmakers, with time ticking away to finish a comprehensive annual defense policy bill this year, may punt on the transgender service dispute in order to get a “skinny” bill enacted, a move that would reauthorize current policies including paying military service personnel. That would continue a decades-long streak of Congress passing the legislation, but also likely leave the ban in place. 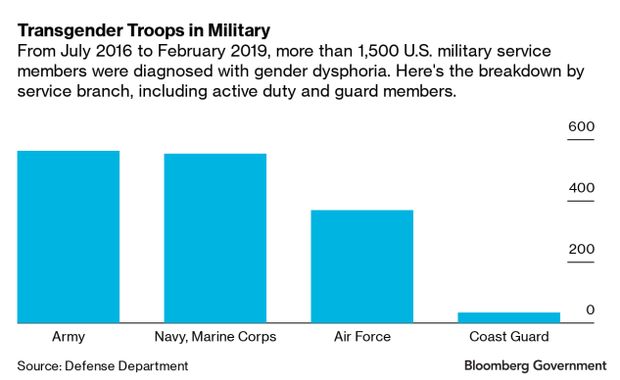 More than 1,500 transgender troops such as Shinn came out and sought health care under a previous policy between 2016 and the beginning of this year, according to the Pentagon. While she is grandfathered in and able to serve, the ability to serve for other transgender troops who have yet to come out remains in the balance.

House Democrats who seized a majority in last year’s midterm elections made reversing the policy a top priority, and transgender rights advocates say a legal fight over its constitutionality could take years. They face resistance from Senate Republicans and the White House.

The point of contention is language in the House-passed version of the defense bill (H.R. 2500). Sponsor Jackie Speier (D-Calif.) and backer Armed Services Chairman Adam Smith (D-Wash.) say the provision would force the military to accept open transgender service.

“The president is the president, the Senate is the Senate and they don’t agree” with the House, Smith said. “They are wrong. This is incredibly important policy and the current policy in place is bigoted and discriminatory and unnecessary and ought to be changed.”

The treatment of transgender troops in the military is among several contentious Trump policies, including the Pentagon’s shifting $3.6 billion Congress approved for military construction projects to the president’s border wall instead, that have snarled talks on the broader Pentagon reauthorization bill.

The Pentagon put the policy in place in April after the Supreme Court cleared away preliminary injunctions from four continuing federal civil lawsuits. Filed in 2017, the suits challenge the policy as unconstitutional.

Rep. Vicky Hartzler (R-Mo.), one of the most ardent opponents of allowing transgender people to serve, said during consideration of the 2020 defense policy bill the “military is under no obligation to accept individuals who do not meet the medical criteria for service.”

“Military service is a privilege. It is not a right. It would be unwise for us to make exceptions to service for one specific entity who could not meet medical standards,” she said.

Trump’s policy requires troops to serve according to their biological sex, denies gender transition health care, and prohibits enlistment by anyone with a recent diagnosis of gender dysphoria, a mental health condition that is common among transgender people.

The Obama administration, after a series of studies and debates, announced in June 2016 it would phase in open transgender service over one year, despite some opposition from conservative Republicans and military brass. The move came on the heels of the military ending “don’t ask, don’t tell” policy for gay troops and opening combat roles to women.

Trump reignited the debate in July 2017 when he sent out surprise tweets saying no transgender troops would be allowed to serve because of high health-care costs and disruption. Many in the Pentagon and on Capitol Hill had thought the issue was mostly settled.

“Our military must be focused on decisive and overwhelming victory and cannot be burdened with the tremendous medical costs and disruption that transgender in the military would entail,” Trump tweeted.

In April, about 1,000 transgender troops were grandfathered in under the Obama policy when the new restrictive policy went into effect, allowing them to continue military careers and seek health care.

No troops have been kicked out of the military so far due to the Trump policy, the Pentagon’s Maxwell said.

The fate of thousands more transgender troops who haven’t officially come out and of many more who want to enlist in the military may now come down to negotiations on a final defense authorization bill for fiscal 2020. A Pentagon survey in 2016 found 8,980 service members self-identified as transgender, and advocacy groups say the number could be much higher.

The legislative outlook has darkened as weeks of negotiations have yet to produce a bill.

The Senate passed its version of a full authorization bill (S. 1790) in June. Smith and House members are now in conference with senators to negotiate a final bill. Senate Armed Services Chairman Jim Inhofe (R-Okla.), signaling his side remains at loggerheads with House members in the talks, introduced a stripped-down defense bill (S. 2731) in late October that would reauthorize only critical programs.

The impasse raised fears Congress may fail to pass the annual bill for the first time in 58 years, and that could mean no resolution to the transgender debate.

Inhofe has said in the past he’s opposed to allowing transgender people to serve in the military and that the the military has had problems with social experimentation. He declined to discuss the issue for this story.

Smith, who panned Inhofe’s so-called “skinny bill,” took aim at Trump’s policy beginning last year when it was clear he would take the Armed Services chairman’s gavel under a Democratic majority. His committee held a hearing in February where transgender troops testified to Congress for the first time.

So far, bill negotiations have failed to agree on the issue, Smith said.

“I have got three or four different arguments about how we can fix it and I am working on those with the Senate,” Smith said. “But at the end of the day they are going to have to agree to whatever it is.”

‘No Need to Prolong This’

Considering transgender individuals for enlistment is more important now because the pool of eligible Army recruits is already small, yet the military turns its back on people capable and willing to serve, Smith said.

‘What’s Your Warrior?’: Army Looks Past Combat to Sign Up Teens

The possibility of a skinny authorization bill sparked concerns for the House-passed transgender measure among advocate groups GLBTQ Legal Advocates and Defenders and the National Center for Lesbian Rights.

Opponents of the Trump policy believe the legislation is their best hope, as the four interlinked federal lawsuits on the issue are expected to grind on for years longer, said Shannon Minter, a lead attorney in two of the cases and legal director for NCLR.

The cases are still in the initial discovery phase, according to court filings. Plaintiffs and the Justice Department are dueling over the release of Trump administration documents showing deliberations on the transgender policy.

Opponents say the policy is based on discrimination against troops and not solid policy considerations. The Justice Department argues the deliberation documents are privileged and shouldn’t be released.

The House version of the bill “would resolve our problem, the ban would be gone and the lawsuits would be moot,” Minter said. “That would certainly be the ideal outcome here. Congress should act, there is no need to prolong this.”

To contact the reporters on this story: Travis J. Tritten at ttritten@bgov.com; Roxana Tiron in Washington at rtiron@bgov.com