Agency task forces announced with great fanfare two years ago as the slayers of unnecessary government regulations have almost entirely disappeared, even as Donald Trump has claimed credit for cutting more rules than any president in history.

Few existing regulations have been rolled back since the initial months of the task force efforts, when 14 Obama-era rules were rescinded by May 2017 using the Congressional Review Act and dozens more changes were made to reduce compliance burdens.

Initial guidance directed regulatory reform officers, beginning with their agencies’ fiscal 2019 performance plans, to report on their work, such as how many deregulatory actions were recommended. But a review of the performance plans of four of the most active regulators, such as the Environmental Protection Agency, shows that instead of numbers, charts are often filled in with “No Target Established” or “TBD.”

Agencies seeking to delay effective dates of rules over the last two years have lost in court at an unprecedented rate, and recent proposed cuts to a core group of major environmental regulations are likely to be challenged as well. These include a rewrite of a rule governing emissions from power plants, a rule defining federal jurisdiction of groundwater, and fuel economy standards for passenger cars.

The task forces were supposed to implement Trump’s campaign pledge to slash regulations by 75 percent—or at least bring them down to pre-1960s levels—as a surefire way to bolster economic growth.

To fulfill his bold campaign pledge, Trump signed Executive Order 13,777 on Feb. 24, 2017, to establish regulatory reform officers and task forces in each agency to ferret out rules for repeal, replacement, or modification.

“I think there was a real sense of exhaustion from the private sector of just never knowing what rules they’re going to face when they’re making investments in long-term plans,” said Jeffrey Harris, who served as associate administrator of the Office of Information and Regulatory Affairs during the first year of the Trump administration. 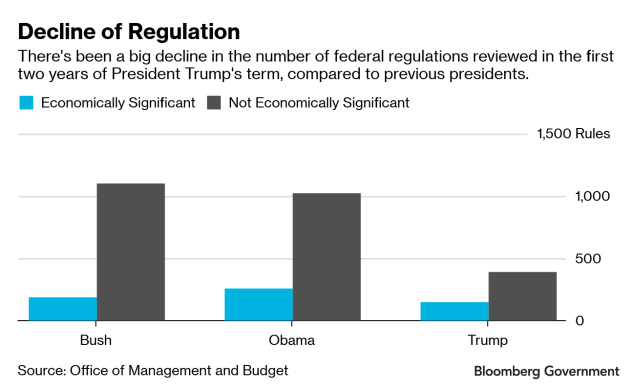 Harris pointed to culprits from the Obama administration such as the Clean Power Plan, Waters of the U.S., net neutrality, Affordable Care Act implementing regulations, methane, and the Department of Labor’s overtime rule.

The president’s regulatory agenda has saved billions of dollars for the economy and has been a consistent source of relief and certainty to small businesses, farmers, and everyday Americans, a senior administration official told Bloomberg Government. OIRA has said the work of regulatory reform officers is reflected in the semi-annual unified agenda of regulatory and deregulatory actions.

But industry leaders and former top regulatory officials from previous administrations paint a different picture, one of taking exaggerated credit for small reductions and an uncertain legal future for the most significant rollbacks.

In truth, most businesses get little or no benefit from eliminating existing rules.

Ongoing costs typically are minimal once a regulation is in place and businesses have absorbed the initial costs of compliance. Rules also set the standards for new entrants, so cutting a rule later could give newcomers an advantage over established businesses that are meeting the higher standard.

“Business wants sensible, predictable, workable regulations that they know they can count on,” said Howard Shelanski, professor of law at Georgetown University and former regulatory chief during the Obama administration.

The Edison Electric Institute, which represents investor-owned utility companies including operators of coal-fired plants, is opposed to reconsidering mercury and air toxics standards because it spent significant time in 2011 engaged in the process and raised a lot of concerns with the EPA, Emily Fisher, general counsel, said at a panel for Senate aides on Feb. 4. “And when it was finalized in 2012, MATS reflected many of the concerns that we raised,” she said.

Automakers have been critical of the administration’s proposal to revoke California’s legal authority to set emissions standards for new automobiles as part of its proposal to cap mileage requirements at a 37 miles per gallon fleet average after 2020, instead of raising them to about 47 mpg under rules adopted by the Obama administration.

They had urged the Trump administration to broker a compromise with California to maintain nationwide uniformity in fuel economy requirements. Roughly a dozen other U.S. states adhere to California’s vehicle emissions standards, a bloc that represents more than a third of U.S. auto sales.

“The auto industry needs regulatory certainty, not protracted litigation,’’ Joe Hinrichs, president of global operations at Ford, said in a statement after the administration said it was breaking off talks with California.

To be sure, completely eliminating regulations is just one part of the Trump administration’s agenda.

The number of reviews on new proposed rules or modifications concluded by OIRA, an agency within the Office of Management and Budget that reviews all significant federal regulations, in the first two years of the Trump administration is about 42 percent of what it was in the Obama administration. That includes a near-freeze imposed on new discretionary regulations, which is having the biggest positive impact on businesses deciding to invest and expand, knowing unexpected and expensive new rules aren’t coming down the road.

Many more rules have been modified to reflect a more limited approach to regulation. The oil and gas industry, for example, has gained substantially more land use and lease sales for drilling, as well as relief from the Obama administration’s methane leak prevention rule.

On the other hand, the administration has proposed some new rules that have not been well received by business. The Federal Aviation Administration’s long-awaited proposal allowing drones to fly over people was resoundingly criticized as too restrictive.

“Under the proposed rule, the vast majority of commercial drones used today would not meet the impact thresholds and would therefore not be able to operate over people,” said a statement by the Commercial Drone Alliance, which represents companies including AiRXOS, Apple Inc., and AT&T Inc., among others.

Even in the oil and gas industry there are privately held worries about state snap-back laws and what the next administration’s EPA and Interior Department are going to do. “They don’t want a situation where the pressure for regulation is building and the administration is doing nothing, and states start to step in,” Shelanski said.

The views of the business community are diverse and there is largely a “wait and see” attitude as to whether the Trump administration can deliver on deregulation, said John Graham, professor at Indiana University and former OIRA administrator under George W. Bush.

“Very positive views that flow of new regulations has slowed. Much more mixed views on whether repeal and reform of existing regulations are constructive,” Graham said.