President Donald Trump, heading into what may be his most consequential year for rolling back restrictions on companies, is counting on Paul Ray, a lawyer with a history of representing oil and gas interests among others, to lead his regulatory affairs office.

The easy cutbacks on rules are long gone, leaving agencies to slash at Obama-era regulations that took years of data, analysis, and lobbying to put in place. Automakers are rebelling against plans to ease emission standards for cars, while environmentalists are shredding the analysis supporting less stringent air-pollution rules.

At the same time, Trump agencies are losing legal challenges to their initial rule delays about 95 percent of the time, according to a tracker maintained by the New York University School of Law. 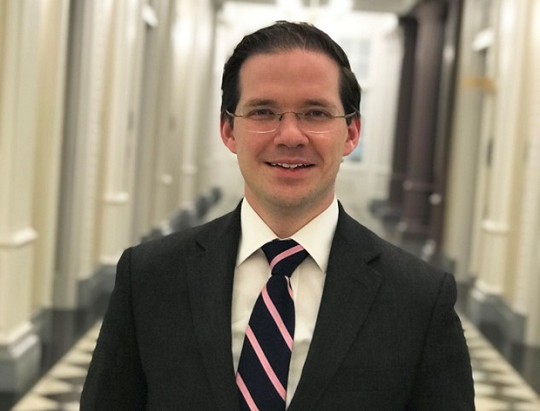 “What I want to bring to the table is this robust confidence in the American people that President Trump very much has and that motivates the deregulatory agenda,” Ray said in his first interview since assuming leadership of the Office of Information and Regulatory Affairs, the Office of Management and Budget agency that oversees the federal regulatory process.

Ray, who had been serving as associate administrator of OIRA since June 2018, was tapped to serve as acting administrator on March 18. His appointment came after a partisan fight ended in a 53-to-46 Senate vote to confirm former OIRA Administrator Neomi Rao to succeed Brett Kavanaugh on the U.S. Court of Appeals for the District of Columbia Circuit.

High-stakes repeals of major Obama-era rules will be getting to the final stages this year under Ray’s watch, said Amit Narang, regulatory policy advocate at Public Citizen.

“It’s interesting to see such an inexperienced OIRA head in place for what could be the most consequential period for OIRA during the Trump administration,” said Narang.

It’s also likely that Ray will be at the agency’s helm for most of the year, given the backlog of acting officials and vacancies that need to be filled across government, Narang said.

Ray, a former clerk for Supreme Court Justice Samuel Alito, said his mandate is to set the bar high for any new regulation by ensuring, for example, that agencies explain in detail why its benefits exceed its costs. Also critical is ensuring that all relevant federal stakeholders are able to review a regulation and comment on it, he said.

Ray’s clients at Sidley Austin included the nation’s largest business trade associations, according to a list compiled by ProPublica. Among them were major oil and gas, energy, paper, and transportation companies.

Ray said he challenged rules under the Administrative Procedure Act and argued whether the agency had adequately accounted for costs and benefits or responded to comments. “Really a lot of the stuff that we’re dealing with day-in, day-out here,” he said.

OIRA’s longstanding policy is to meet with any party, including businesses, interested in discussing issues about a rule under review. These meetings are publicly disclosed and must be conducted by the OIRA administrator or a designee.

There are a “few matters” from which he is recused, Ray said, adding he can’t discuss them specifically. “But I do think it’s very important to be open to hearing from both sides on any regulatory issue,” he said.

Ray, a native of Chattanooga, Tenn., is a graduate of Harvard Law School, where he developed a strong interest in administrative law. He also clerked for Judge Debra Ann Livingston of the U.S. Court of Appeals for the Second Circuit in New York.

Ray was drawn into public service by Labor Secretary Alexander Acosta, who also had clerked for Alito, serving as the secretary’s counselor on the department’s regulatory portfolio.

To contact the reporter on this story: Cheryl Bolen in Washington at cbolen@bgov.com