The Trump administration appears to be taking the need for technology modernization seriously. President Donald Trump requested an unprecedented $87.8 billion for unclassified IT in fiscal 2020, according to documents released March 18, and in the past two years federal agencies have been getting more money for information technology than they expected.

The topline figure represents a modest decrease from the $88 billion federal agencies are projected to spend in fiscal 2019. But compared with the amount of funding government technology leaders thought they would receive at this time last year – especially those in civilian agencies – the fiscal 2020 IT budget reflects critical investments in technology modernization.

Federal agencies are making significant investments to build new services in the cloud and migrate existing applications, according to a senior administration official who asked not to be named. These investments will also support technologies such as automation, robotics, artificial intelligence, and natural language processing, the official said.

Civilian Agencies Are IT Budget Winners

The president’s fiscal 2020 budget request includes $51 billion in IT funding for civilian agencies, substantially more than the $45.8 billion the White House requested for civilian IT in fiscal 2019.

The Defense Department will receive $36.8 billion in unclassified IT funding, a modest decrease from the $37.9 the Pentagon expects to spend in fiscal 2019. The request did not offer a figure for classified IT spending. 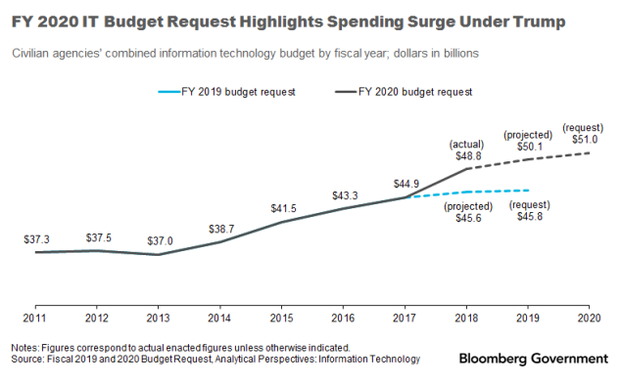 These funding increases are necessary to support up-front investments in emerging technologies, while at the same time maintaining the legacy systems that are key to agency operations. Federal agencies are running a number of IT systems that are more than 20 years old, and in the long run the costs of maintaining them are higher than transitioning them, the official said.

There’s a multibillion-dollar difference between what civilian agencies expected to receive in last year’s budget and the amount Congress actually enacted. In its fiscal 2019 request, the Trump administration sought $45.8 billion for fiscal 2019, a figure in line with the $45.6 civilian agencies were projected to spend on IT in fiscal 2018.

One explanation for the FY 2019 jump lies in the compromise that followed a month long partial government shutdown in from Dec. 22 – Jan. 25. Although the president had sought to boost spending at the departments of Defense and Homeland Security while slashing civilian agencies’ budgets virtually across the board, lawmakers reached a compromise that guaranteed sizable budget increases for both civilian agencies and the Pentagon in February. With higher enacted funding at their disposal, agencies are spending more on information technology.

As the government “unburdens” itself from its legacy systems, the official said, there may be opportunities to not only take a step forward, but also leapfrog a few steps and take advantage of what’s available in the private sector.