Sally Quinn, 75, spent five days on the phone trying to find a way to get her and her husband Clyde, 84, out of path of Hurricane Dorian in early September, as the monster storm barreled toward their coastal South Carolina home.

Quinn, a former rape crisis center director in the past had always followed mandatory evacuation orders and left quickly. But now Clyde, a diabetic amputee with vision problems, was bedridden on home hospice care. It had taken two nurses and a lift to move him into the house, and Quinn knew she couldn’t lift him and his oxygen tanks to their car.

The local fire and police departments told Quinn they couldn’t help. Nor could the state health agency. Finally, she reached a non-profit hotline that moved quickly to get them out. “It was—it was scary, and I don’t scare easily,” she said. “I did not know how I was going to get him to safety, or where we could go.” 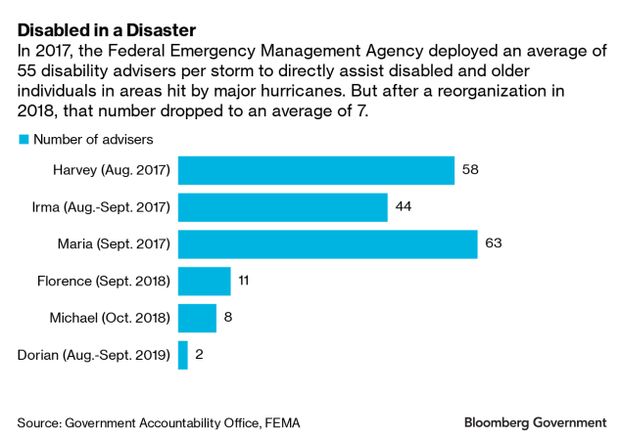 But the tragedy avoided—people with difficulties fending for themselves left to face a disaster alone—risks becoming more common, advocates for people with disabilities say, because the Federal Emergency Management Agency has downgraded its ability to help them at the same time as major storms and fires are becoming more frequentand dangerous.

“We built something up to meet that need, and they have subsequently decimated it,” said Marcie Roth, a former top FEMA official who is a board member for the Partnership for Inclusive Disaster Strategies, the hotline that helped the Quinns.

Three years ago, when Roth was at FEMA, the agency would deploy dozens of disability specialists ready to provide on-the-ground help to disaster victims. Since then, though, a drastic rollback of that team’s role by FEMA, as well as cuts to training and coordination with non-profits and local support, have left a gap, critics say.

“Now that we’re having these sort of more frequent extreme hurricanes, it’s just becoming more and more important that FEMA staff have this competency,” said Elizabeth Curda, the director at the Government Accountability Office responsible for a recent report on FEMA and the difficulties of supporting disaster-impacted disabled individuals.

FEMA said in an emailed statement it has merely shifted its strategy from having its expertise concentrated in one area of the organization to having it spread out across the agency, including frontline storm response personnel.

A growing number of Americans—one in four, according to government data—are living with disabilities, defined as problems with mobility, cognition, hearing, vision, living independently or being able to do basic tasks like bathing or dressing themselves. Moreover, one in seven Americans are over age 65, a number set to grow to one in five by 2040.

Disasters are often more difficult for this population, as electric outages threaten power for medical devices and hearing aids, many shelters lack wheelchair access, and supplies of oxygen and medical supplies can dwindle.

“This is a huge slice of the population that’s often undercounted,” June Isaacson Kailes, a disability policy consultant who serves on FEMA’s National Advisory Council. Kailes said her views were her own and didn’t reflect those of the council or agency.

This isn’t the first time FEMA has been accused of failing to do enough to help vulnerable people escape disaster. After Hurricane Katrina struck New Orleans in 2005, images of waterlogged, abandoned bodies of storm victims stoked public outcry. Thirty-five patients at a nursing home drowned when its owners didn’t heed the mandatory evacuation order. Post-Katrina, FEMA launched the Office of Disability Integration and Coordination—which Roth built during her tenure under the Obama administration.

In 2017’s Hurricane Maria, for example, 63 disability integration advisers—people trained to give support and training to individuals with disabilities and disaster responders—were deployed.

But a sweeping policy change in the agency’s approach to disability support was announced in 2018. The number of advisers deployed to respond to Hurricane Michael dropped to eight. Those advisers’ role was less hands-on and more focused on giving technical assistance to other staff. 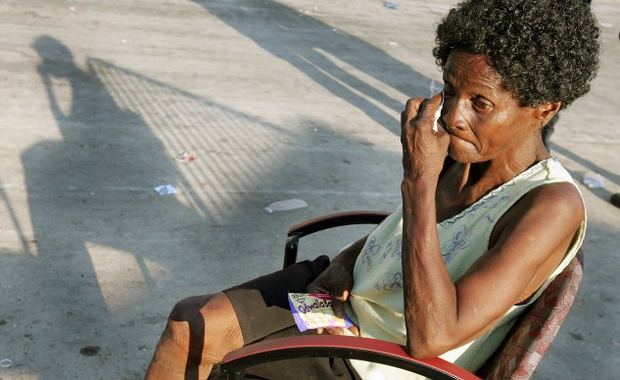 Photo – Mario Tama/Getty Images
Martha Smith-Aguillard, 72, wipes her eye as she refuses to leave the New Orleans Convention Center September 6, 2005,
after Hurricane Katrina. Smith-Aguillard said she was taken from her home to the center by authorities but refused to be
airlifted out of New Orleans to Texas as authorities had planned. FEMA’s Office of Disability Integration and Coordination
was established after Katrina to help deal with vulnerable populations in disasters.

FEMA said it would train all deployable and program staff—not just integration advisers—to assist those with disabilities. But it made the switch without a training program in place, nor a set of objectives or timeline to do so, according to Curda’s 2019 GAO report. The agency had yet to provide comprehensive training to all deployable staff, Curda testified to the House Homeland Security Committee in July.

“Unqualified people are now dealing with life and death, lifesaving, life-sustaining and the futures of 26 percent of the population,” Roth testified at the same hearing.

FEMA in 2017 had also stopped providing comprehensive training to local governments and community groups on how to incorporate the needs of individuals with disabilities in emergency planning, Curda said. FEMA has since said it will have a new course for the 2020 hurricane season.

The lack of staff and training has been compounded by a lack of coordination with outside groups since 2017, disability advocates said in interviews.

“In the past, FEMA provided point people to these groups for collaborating on disability issues,” Kailes said in an email. “This is no longer the case.”

Linda Mastandrea, director of FEMA’s Office of Disability Integration and Coordination, the post Roth once held, saidthe office has shifted its focus to building capacity across the organization, but it still engages in disaster coordination calls and works with disability advocacy groups. Mastandrea, herself a gold-medal winning Paralympian, said the agency now has a 30-minute online training required of all FEMA staff and other training and orientations are available.

“After the unprecedented 2017 hurricane season, we learned that having disability integration competency in one office and in one deployable cadre would not meet the needs of people with disabilities,” she said.

Equal access to emergency services for individuals who are disabled or older is guaranteed under such laws as the Rehabilitation Act of 1973 and the Americans with Disabilities Act of 1990, but government agencies like FEMA don’t always enforce those requirements when giving out billions in disaster aid, disability advocates say.

Legislation introduced by Sen. Bob Casey (D-Pa.) (S. 1755) and Rep. Jim Langevin (D-R.I.) (H.R. 3208) would order GAO to investigate if disaster funds since Katrina have complied with these laws. It would also require the Department of Justice to check if the civil rights of individuals have been upheld, and it would create a grant program to give $25 million a year for five years for disaster and disability-related research and pilot programs, among other mandates.

“I think particularly people with disabilities have not been factored into disaster planning sufficiently,” Langevin, a quadriplegic who uses a wheelchair, said in an interview.

To be sure, even before FEMA’s reorganization, the agency was already facing challenges at providing disaster aid to disabled and older people, as outlined in a 2017 report from the GAO.

And advocates are quick to point out that the responsibility of ensuring emergency help to those with disabilities does not rest with FEMA alone. Local and state emergency managers, along with individuals themselves, must play a role, Valerie Novack, a disability rights fellow at the Center for American Progress said in an interview.

Still, it doesn’t make sense to say people who face some of the starkest challenges should also take on more responsibility for their own evacuation plan than non-disabled citizens when current law says FEMA should be spending so all groups have equal access, Novack said.

“It’s really just irresponsible to continue to plan for generally an able-bodied average height male,” she said “It’s egregious, and it’s costing people their lives and their health and their safety.”