President Donald Trump’s gambit to extract a few billion extra dollars for border fencing in fiscal 2019 may succeed in the short term, but his emergency declaration and other tactics could set in motion long-term changes in how lawmakers deal with the White House on spending issues.

Trump threw a wrench into the normal give and take between the executive and legislative branches by signing a spending bill and then immediately seeking to undermine it. The president agreed to a measure last month that gave him $1.375 billion for border fencing and on the same day issued an emergency declaration to access another $3.5 billion.

The president’s moves have prompted discussions in Congress on stricter limits on the executive branch’s financial flexibility and a permanent change to the National Emergencies Act even as the fight over the declaration plays out.

“There’s going to be a lot of appetite for both amending the National Emergencies Act but also just making sure the statutory authority is circumscribed” in fiscal 2020 appropriations talks, said Sen. Brian Schatz (D-Hawaii), ranking member on the Appropriations Military Construction-VA Subcommittee.

The House passed a resolution that would reverse Trump’s decision by a vote of 245-182 on Feb. 26, and the Senate is expected to pass the measure as early as next week. While both chambers will likely fall short of two-thirds majority needed to override a veto, there’s still widespread dissatisfaction with the president’s maneuver on Capitol Hill. 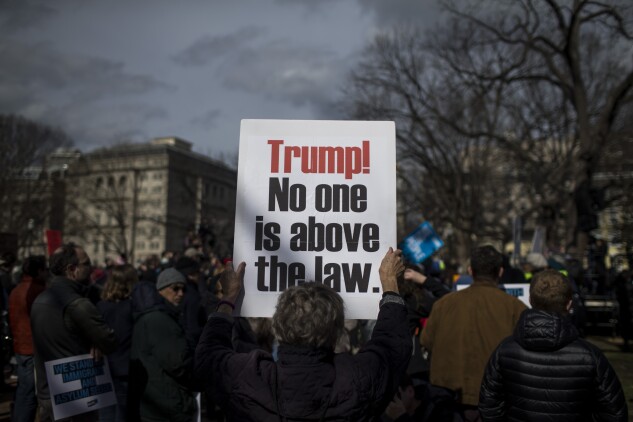 A demonstrator holds a sign in Lafayette Square during a demonstration near the White House protesting Trump’s declaration of emergency powers.
Photo by Zach Gibson/Getty Images

Susan Collins (Maine) is among the the Republicans senators who plan to support the resolution to halt Trump’s declaration that she says would have “enormous implications for our separation of powers.”

“This is about Congress protecting its constitutional prerogative to have power over the purse and to appropriate funds,” Collins told Bloomberg Television. “The president’s role is to either sign the bill into law or to veto it. He does not have unilateral authority under the constitution to move billions of dollars around without permission from Congress,” she said in the interview on Wednesday.

It is unusual for a president to sign a spending bill into law and then immediately seek to go beyond its limitations, said Zachary Price, an associate law professor at University of California Hastings and a former attorney with the Justice Department’s Office of Legal Counsel. Even presidents who object to a measure in an appropriations bill will generally comply with the law, he said.

“This strikes me as legally aggressive in ways that could be disruptive” to future appropriations negotiations, Price said in a phone interview.

Trump on a Short Leash

The conflict between Trump and Congress will escalate in the coming weeks. With Trump’s fiscal 2020 budget request expected on Monday, lawmakers are set to begin work on the annual spending bills. The acting director of the Office of Management and Budget, Russell Vought, will defend Trump’s request and priorities on the Hill next week, as will other Cabinet secretaries.

Key Democrats say they want future appropriations bills to keep Trump on a shorter leash, and members of both parties are weighing permanent changes to the president’s ability to declare emergencies in order to ignore appropriators’ instructions.

“You have to think about, can the Senate take back its own authority?” said Sen. Patrick Leahy (D-Vt.), the top Democrat on the Appropriations Committee.

Lawmakers have identified two options to prevent the move in the future. They could amend the 1976 National Emergencies Act (Public Law 94-412) to make it more difficult to use military construction funds for other purposes without Congress’s consent. And they could include stricter reprogramming limitations in future defense appropriations bills that would limit his ability to move around money, such as the $2.5 billion from a military counter-narcotic program Trump has eyed.

Leahy and Schatz said senators will discuss measures in appropriations bills that further restrict the president’s ability to reprogram funds, or move them from one account into another.

The House Armed Services and Appropriations committees ”will zero out their reprogramming authority for fiscal year 2020,” Smith said.

The move to restrict reprogramming would primarily be pushed by Democrats. Senate Appropriations Chairman Richard Shelby (R-Ala.) has defended Trump’s decision to declare an emergency and said he had no problem with it.

“They have to deal with the Senate, too, so I don’t know,” said Rep. Ken Calvert (R-Calif.), ranking member of the House Appropriations Defense Subcommittee.

The $3.5 billion in emergency funds Trump seeks for the wall would have to come out of the military construction budget. But the administration isn’t arguing that the billions of dollars in extra money aren’t needed for military construction projects, Robert H. McMahon, assistant secretary of defense for sustainment at the Department of Defense told House appropriators at a subcommittee hearing on Feb. 27. 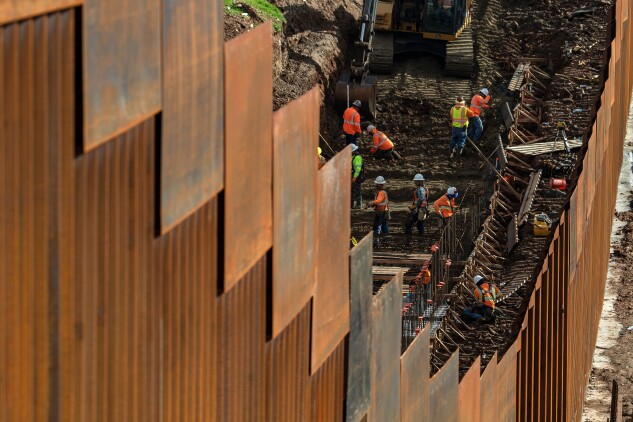 That explanation didn’t go over well with Rep. Debbie Wasserman Schultz (D-Fla.), chairwoman of the House Appropriations Military Construction-VA Subcommittee, who said the administration was treating appropriators like “chumps” and seeking to use military construction dollars as a “slush fund.”

Democratic appropriators have already sought to clamp down on Trump’s ability to shift money around for other controversial programs. Rep. Rosa DeLauro (D-Conn.), chairwoman of the House Appropriations Labor-HHS-Education Subcommittee, said she wants to limit the administration’s ability to move money into the Health and Human Services office responsible for caring for unaccompanied migrant children. The fiscal 2019 appropriations bill allowed the administration to increase the size of that account by up to 15 percent by shifting unspent funds from other accounts. DeLauro wants the limit to be 10 percent.

A majority of Republicans in both chambers still oppose the resolution that would block Trump’s emergency declaration, even if some echo Collins’s concerns about the long-term implications. Several Republicans have said they believe Trump’s action is legal because the National Emergencies Act gave the president broad authority. But though they support Trump’s action now, they’d like to restrict similar actions in the future.

Rep. Tom Reed (R-N.Y.) introduced a bill (H.R. 1410) that would cause an emergency declaration to expire after 60 days unless Congress approves it. The measure has 19 cosponsors — 12 Democrats and 7 Republicans.

An automatic expiration would give lawmakers less of an uphill battle than they face now. Rather than needing to cobble together a veto-proof two-thirds majority to end an emergency, they could let it end if there’s not much support.

Although lawmakers have discussed long-term restrictions to the president’s flexibility, the outlook for appropriations depends heavily on how the emergency declaration fares in court. Sixteen states have sued, seeking to block the declaration. Trump predicted that the 9th Circuit Court of Appeals would rule against him but that the U.S. Supreme Court may rule in his favor.

Bloomberg Quicktake: Can Trump’s Wall ‘Emergency’ Stand Up in Court?

Lawmakers are “a long way from being able to evaluate” how the emergency affects future spending negotiations, Sen. Roy Blunt (R-Mo.), a senior appropriator, said.