Elton John headlined a fundraising concert for Hillary Clinton’s 2008 presidential bid, triggering a complaint, rejected by the Federal Election Commission, that the British pop star violated a ban on foreign contributions in U.S. elections. In the 1990s, charges that Chinese businessmen funneled millions of dollars into the Democratic and Republican parties through straw donors spurred congressional hearings and hefty fines.

What’s different now is that the episode at the heart of the probe involves not money but something that could be just as valuable–a foreign government investigation of a political rival, according to Ciara Torres-Spelliscy, a law professor at Stetson University, who’s studied the history of campaign finance law.

“It is beyond the pale,” Torres-Spelliscy said, to make the request Trump did in a phone call to Zelenskiy. The House clearly could determine this was an illegal solicitation of something valuable to the president as a candidate for re-election, she said, but lawmakers wouldn’t be able to point to a specific precedent. 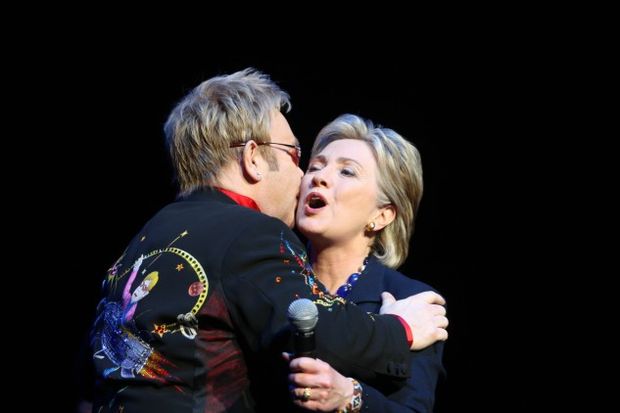 Trump’s case is murkier than past episodes because previous presidents knew better than to ask for such favors, said Trevor Potter, a Republican former FEC commissioner who now heads the nonprofit watchdog Campaign Legal Center. He cited the example of a memo written by James Baker in 1992, when he was chief of staff to President George H.W. Bush. According to the memo, as reported by the New York Times, Baker said “we absolutely could not” contact Russia or Britain to ask for negative information about Bill Clinton, who was then Bush’s opponent in a presidential race Bush ultimately lost.

Determining the legality of Trump’s request for a foreign government investigation could depend on where the House looks for guidance. The Trump Justice Department and the Democratic chairwoman of the FEC are starkly divided about whether campaign-finance law may have been violated.

FEC Chairwoman Ellen Weintraub said laws barring foreign campaign contributions are broad and could cover a request for non-monetary help, such as investigating an opponent. She’s proposed an “interpretive rule” to state this, but the FEC lacks a quorum of at least four commissioners needed to approve any new rule.

The Justice Department said it reviewed the whistleblower complaint about the Trump-Zelenskiy phone call and found no violation could have occurred because the favor Trump requested had no clear value to his campaign. The Justice Department’s interpretation was cited in a letter sent to House leaders last month by White House Counsel Pat Cipollone, refusing to cooperate with the impeachment inquiry.

What to Know About Trump, Ukraine and Impeachment: QuickTake

Theoretically, at least, the FEC and Justice Department aren’t supposed to have different views on the law. A “memorandum of understanding” between the agencies signed in the 1970s requires them to coordinate their activities. The memo has never been updated and is no longer operative, according to the Justice Department.

Sen. Amy Klobuchar (Minn.), a candidate for the Democratic presidential nomination, said last month that the Justice Department violated procedures in handling the complaint. She pointed to the memorandum between the FEC and the Justice Department, saying it required the whistleblower’s complaint about the Ukraine call to be referred to commission.

Caroline Hunter, a Republican member of the FEC, has questioned Weintraub’s broader interpretation of what constitutes an illegal foreign contribution, saying that the chairwoman creates the “false impression that the law is always clear” on this subject.

As an example of the ambiguity of the law, Hunter cited the dismissed FEC complaint brought by the conservative group Judicial Watch involving Elton John’s concert at Radio City Music Hall benefiting Clinton in 2008. The commission voted 5-0 to rule that the law banning foreign contributions wasn’t violated even though the concert performance had raised millions of dollars for Clinton.

John’s performance “constitutes a volunteer service that is exempted from the definition of ‘contribution’ under the Act,” said an FEC general counsel’s report approved by the commissioners. Therefore, the report said, the Clinton campaign “has not received an in-kind contribution from a foreign national as alleged in the complaints.”

Efforts to limit foreign influence are as old as the Constitution, which banned U.S. officials from accepting foreign titles or emoluments. Since 1966, federal law has explicitly banned foreign contributions of any “money or other thing of value” to a campaign. The ban was strengthened in amendments to the Federal Election Campaign Act enacted in 1974 in the wake of the Watergate scandal.

That scandal included charges of corporate money from Gulf Oil, American Airlines, and others illegally funneled through foreign subsidiaries or bank accounts to President Richard Nixon’s re-election campaign. Torres-Spelliscy has written that articles of impeachment drafted against Nixon but never voted on due to his resignation in 1974 included alleged campaign-finance violations.

The biggest modern example of foreign influence involved millions of dollars from China and other foreign sources channeled through straw donors to the 1996 re-election campaign of then-President Bill Clinton, resulting in record Federal Election Commission fines totaling over $700,000 and criminal prosecution of several donors. A similar FEC case involving foreign money funneled to Republicans in the 1990s was dismissed on a 3-3, party-line vote of the commissioners, with Democrats voting to pursue the matter and Republicans voting to drop it.

Trump has maintained that he’s free to accept help from foreigners, telling George Stephanopoulos of ABC News in a June interview he would accept “oppo research” offered by a foreign country.

But Weintraub has said foreign intervention in elections has been considered unacceptable since the earliest days of the nation, citing a 1787 letter from John Adams to Thomas Jefferson warning of the danger of “foreign Interference, Intrigue, Influence.”

To contact the editors responsible for this story: Kyle Trygstad at ktrygstad@bgov.com; Bennett Roth at broth@bgov.com; Robin Meszoly at rmeszoly@bgov.com