“What exactly is the strategy?” asked Amir Husain, chief executive officer of Austin-based AI developer SparkCognition Inc. in a conversation with Bloomberg Government. “Our government has the opportunity to be the world leader in AI, but there’s not a mention of a single cent in new funding.”

Although the document doesn’t mention China directly, the document clearly represents the Trump administration’s response to Beijing, which has pledged to increase its investment in AI-related R&D tenfold and become the world’s leader in AI by 2030. 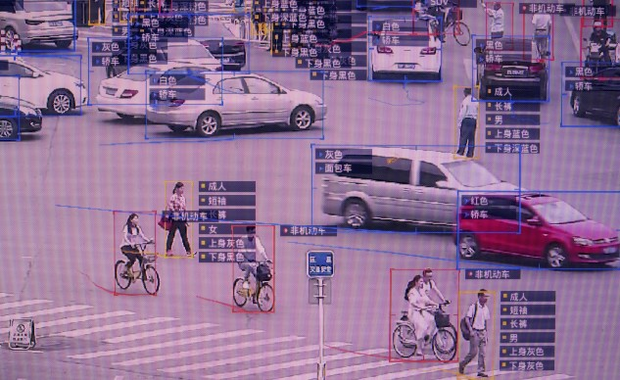 U.S. policy makers are concerned about the surge in China’s development of artificial intelligence applications, like this demo of a pedestrian and vehicle recognition system. (Gilles Sabrie/Bloomberg)

According to the executive order, “Continued American leadership in AI is of paramount importance to maintaining the economic and national security of the United States,” and maintaining that leadership will require “concerted effort” to promote advancements in technology and innovation.

The strategy, drafted in large part by the White House Office of Science and Technology Policy, sets out five high-level principles for a national AI policy:

Unlike China’s AI strategy, the American AI Initiative arrives without an investment package or long-term milestones for evaluating success. Instead, agencies are directed to “prioritize” existing funding and resources toward AI.

The U.S. government hasn’t yet released an estimate on what agencies invest in AI each year, though providing greater transparency into AI spending is one of the strategy’s goals. The Pentagon – the government’s largest investor in AI – submitted a fiscal 2019 budget request for research, development, test, and evaluation (RDT&E) that included about $1.9 billion for AI-related programs. The Defense Advanced Research Projects Agency (DARPA) alone has pledged more $2 billion in AI R&D over the next five years.

But a Bloomberg Government analysis found that governmentwide spending on unclassified AI contracts totaled only about $592 million in fiscal 2018. The Pentagon and intelligence agencies have no doubt issued millions more in classified contracts that aren’t publicly reported.

To jump-start the government’s efforts, the strategy outlines 11 directives that federal agencies must carry out within 90 to 180 days. For example, within 180 days the General Services Administration must report back to the White House on ways to better use cloud computing to support federally funded AI R&D.

But in other cases, these orders simply restate policies or initiatives already underway. Within 180 days, for instance, agencies must align current efforts to create and share government data sets with AI researchers with the Trump administration’s cross-agency goal of “leveraging data as a strategic asset.”

Aligning the government’s open data initiatives with its AI R&D objectives is both good policy and an expected element of the strategy. Nevertheless, this has been an aspect of U.S. AI policy since at least the Obama administration issued its own AI strategy in October 2016.

Trump’s executive order received mixed reviews. Industry and policy experts applauded the move to start a national conversation about AI, but many were concerned that the strategy doesn’t go far enough.

“This is a huge step in the right direction,” Steve Harris, senior vice president of IT contractor Dell EMC Federal Inc., told Bloomberg Government. “For every agency making progress on AI, there are others that don’t feel empowered. Funding is critical, but so is empowering [chief information officers] and program managers with a mandate to invest in new technologies.”

Daniel Castro, director of the nonpartisan Center for Data Innovation, commended the strategy’s priorities, especially helping U.S. companies maintain their global advantage and the need to prioritize research and training programs. However, for the strategy to be “transformative,” Castro wrote in a statement, it needed to include a request to Congress for additional funding for AI R&D and to “resist calls to implement roadblocks,” such as export restrictions, on AI technologies.

Darrell M. West, an expert with the Brookings Institution, offered a similar assessment: “Without additional funding for research, workforce development, and infrastructure, the new initiative likely will fall flat.”

The Defense Department released its own AI strategy Feb. 12, offering what amounts to the national security component of the American AI Initiative.

“AI is poised to change the character of the future battlefield and the pace of threats faced in today’s security environment,” according to the DOD’s statement on the strategy. The strategy calls on the DOD to “lead in military ethics and AI safety,” while pledging to use AI technologies solely for defensive purposes, to advocate for international guidelines on the use of military AI, and to keep human operators “in the loop” to prevent mishaps by autonomous systems.

Even the Pentagon’s choice of AI applications to prioritize – image processing, predictive vehicle maintenance, cybersecurity, and humanitarian and disaster relief – reflect its aim of projecting a benign image and keeping a low profile.

At the heart of the strategy is the Joint Artificial Intelligence Center (JAIC), which will coordinate AI prototyping efforts across defense agencies, the military services, technology companies, academia, and U.S. allies.

The Pentagon’s AI strategy also arrived with no additional funding attached. It nevertheless aimed to draw sharp distinctions between the role the department sees itself playing in AI development and the ways it plans to use AI, and the roles of China and Russia, whose activities “raise questions regarding international norms and human rights,” wrote the strategy’s authors.

“When you think about AI and DOD, many immediately bring up ‘killer robots,’” said Husain. “But by focusing on priorities that are noncontroversial, it helps the organization build awareness and competence. You don’t want to start with a large-scale, fully autonomous program without taking baby steps first.”

It’s unclear how this strategy will be received by large AI technology companies, such as Alphabet Inc. and Microsoft Corp., which last year faced backlash from employees over concerns about the militarization of AI. The Pentagon, for its part, appears focused on rebuilding those relationships.