More than four months into the 116th Congress, Trump still talks about legislation in broad terms but has shown little urgency in working with a divided Congress to get bills passed.

Democrats have no incentive to work with the president and give him a legislative victory he can champion ahead of the 2020 election, and Senate Majority Leader Mitch McConnell (R-Ky.) hasn’t announced any legislative agenda this year, said Kyle Kondik, communications director at the University of Virginia Center for Politics.

“I don’t think he necessarily needs legislative accomplishments,” Kondik said of the president. “Part of how people are going to decide on his reelection is what the state of the economy is and whether they feel satisfied with the state of the country.”

The president has been ready to engage since the start of the year, but was slowed by the government shutdown and finishing last year’s spending bills, the official said. Now, with no legislative victories to show from winning control of the House, Democrats have come to the table looking to advance some of their agenda items—such as citizenship for Dreamers, the unauthorized immigrants who arrived in the U.S. as children, the official said. 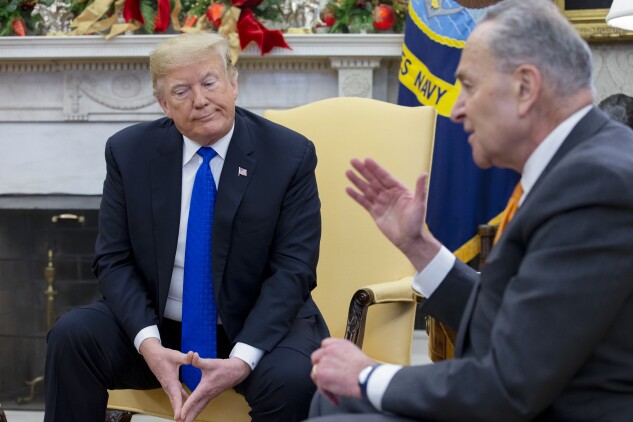 Trump, who until becoming president had never held public office, has shown little interest in the mechanics of lawmaking. The former business executive is more likely to announce a broad mandate and tell Congress to work out the details.

A review of his public comments and media interviews by Factba.se, which tracks Trump’s statements and activities, since the start of the year finds 516 mentions of infrastructure, health care, drug prices, immigration, trade, or tax cuts, but without specific proposals.

“No more costly & time consuming investigations,” Trump said in a Tweet sent near midnight May 2. “Let’s do Immigration (Border), Infrastructure, much lower drug prices & much more – and do it now!”

Lawmakers have been stung many times by his unpredictability. During talks last year on a comprehensive immigration deal that ultimately failed, Trump was a moving target on funding for a border wall, migration levels and support for Dreamers. Then, two months later, he unexpectedly threatened to veto a $1.3 trillion government spending bill hours before the signing ceremony.

It is important for this president to have new legislative accomplishments, the White House official said, adding that there is incentive for Democrats and congressional Republicans to compromise because they need victories as well.

The official pointed to criminal justice reform (Public Law 115-391) passed last year as a model of bipartisanship and the ability of the White House and Congress to negotiate legislation. And while there may be a deficit of trust on both sides, the president wants legislation, the official said.

“I think he believes that his political prospects would be enhanced by action” on infrastructure, drug prices, and immigration, said Bill Galston, chair of the governance studies program at the Brookings Institution.

At the same time, the president probably thinks he can “tough it out till reelection” without new legislation, Galston said.

The challenges to getting any bill that all sides can agree on are formidable.

Following their meeting with Trump last Tuesday, Democrats announced an agreement to spend $2 trillion on infrastructure, subject to the White House finding a way to pay for it. Yet funding has been the sticking point for years, and acting White House Chief of Staff Mick Mulvaney cast doubt on getting a deal before the meeting was even finished.

Trump often comments on the “failure” of the Affordable Care Act and has called for a replacement plan with lower premiums and deductibles, going so far as to appoint Republican Sens. Bill Cassidy (La.), John Barrasso (Wyo.), and Rick Scott (Fla.) to work on it. But the GOP has yet to come up with a proposal that can pass.

The House and Senate voted this spring to block Trump from declaring a national emergency to use the military to build a border wall. Trump vetoed the measure and declared an emergency anyway, raising the temperature on an already heated issue.

Significantly, the White House has yet to send Congress implementing legislation for the U.S.-Mexico-Canada trade agreement that Trump signed last November, in part because of concerns raised by House Speaker Nancy Pelosi (D-Calif.) over its lack of an enforcement mechanism. Pelosi has said enforcement must be part of the agreement, not a sidebar or later legislation.

Trust is still an issue. Even after Democratic leaders praised the infrastructure meeting at the White House, where Trump also promised to work with Democrats on reducing drug prices, senators were skeptical.

“I’m glad they had a meeting today, but Trump is going to totally forget about this meeting by tomorrow morning,” said Sen. Chris Murphy (D-Conn.). “The guy who really matters over there, Mick Mulvaney was undermining the agreement at the exact same time.”

Trump has been talking about lowering drug prices for a long time, but looking at the proposals to date from Health and Human Services Secretary Alex Azar, “there’s not a whole lot of there there,” said Sen. Ron Wyden (D-Ore.).

Also holding back a legislative strategy is the unprecedented turnover of senior staff at the White House, including in Trump’s Domestic Policy Council, which is principally charged with developing policy positions and specific proposals to give to Congress.

The White House on April 12 announced it had filled more than 20 staff positions at the deputy and special assistant to the president level, but lawmakers frequently complain that they don’t know who to contact about a particular issue.

Out of 330 total meetings and public events in the first four months of 2019, the president has held three Cabinet meetings and fewer than a dozen meetings with members of Congress, according to scheduling data compiled by Factba.se.

The president also has been quick to blame Democrats, even in the Republican-controlled 115th Congress, for stalling legislation.

In his most recent State of the Union address, Trump said that in the last Congress both parties came together to pass legislation to confront the opioid crisis, a sweeping new farm bill, and historic changes to the Veterans Administration.

But future cooperation would stop if Democrats pushed their oversight authority, he warned. “If there is going to be peace and legislation, there cannot be war and investigation,” the president said.