President Donald Trump has concluded that he has “accomplished the military,” but reality belies a fleeting and tenuous achievement threatened by political tumult, budget limitations, and a lack of permanent leadership at the Pentagon.

The president likely will boast in Tuesday’s State of the Union address about the rich military budget —indeed a feat that eluded the previous administration.

Yet, after two years of increased national security spending—reaching $716 billion this fiscal year—budget caps are set to return, raising the specter of defense spending cuts of about $140 billion compared with this year.

While there is political will to lift the caps among both House Democrats and Senate Republicans, differing priorities and paralyzing disagreements over whether U.S. border security constitutes a national emergency, or the U.S. should withdraw from Syria and Afghanistan, could ultimately risk reducing and delaying Pentagon spending.

“Like almost everything with Trump it’s a glitzy façade that oftentimes masks a fundamentally flawed structure,” said Derek Chollet, an executive vice president at the German Marshall Fund and former senior Pentagon adviser. “Trump has put a sort of shiny sign in gold on his budget, but there are deep structural concerns for the future.” 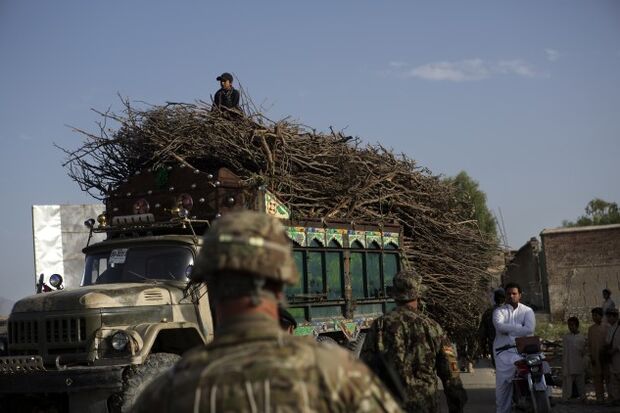 A truckload of firewood is inspected as soldiers from the 101st Airborne Division conduct a joint mission with the Afghan military. (Victor J. Blue/Bloomberg.)

Any bragging rights will be dampened by uncertainty about the tardy budget request, initially due on Feb. 4, but delayed by the partial government shutdown. Over the course of several months, Trump has gone from wanting to trim national security spending closer to $700 billion to stating that he may be requesting a whopping $750 billion after prodding from congressional leaders such as Sen. Jim Inhofe (R-Okla.), the chairman of the Senate Armed Services Committee, and Rep. Mac Thornberry (R-Texas), the House Armed Services Committee ranking member.

There’s no doubt that Pentagon spending will be “more politicized,” in the coming year with a Democratic-led House and a long roster of Democrats announcing their candidacies for president. The Defense Department is also hobbled by “hemorrhaging its leaders and talent,” Chollet said.

The problem goes beyond having an acting secretary of defense and an acting deputy, he added.

Trump has expressed an eagerness to withdraw U.S. forces from Afghanistan, which make up 14,000 of the 17,000 foreign troops there. That would leave a weak Afghan military vulnerable to further advances by the Taliban, the Islamic fundamentalists who once ruled the country and have reclaimed significant patches of it.

Conflict in the country has escalated since the Afghan military officially became responsible for security in 2014. Islamic State terrorists established a presence in eastern Afghanistan and have claimed credit for terrorist attacks. Roughly 11 percent of Afghanistan’s population now live in areas under the control of the Taliban and other insurgents, and more than a quarter are in contested regions.

Yet Trump on Sunday said he’s determined to end America’s “endless wars.” The president will reaffirm in his State of the Union speech his determination to protect American interests and bring to a close U.S. involvement in long-running foreign conflicts, according to an administration officials who asked not to be named to preview the president’s address.

“I’ve been hitting very hard in Afghanistan and now we’re negotiating with the Taliban,” Trump said in an interview with CBS News. “If you look at Afghanistan, we’re going in very soon we’ll be going into our 19th year spending $50 billion a year.”

Since abruptly announcing he was bringing troops home from Syria “now,” Trump and his top advisers have sought to establish specific conditions for the withdrawal: promising to depart slowly, to continue striking Islamic State on the way out, and seeking assurances from Turkey that it won’t attack America’s Kurdish allies.

“When I took over Syria it was infested with ISIS. It was all over the place,” Trump told CBS on Sunday. “And now you have very little ISIS and you have the caliphate almost knocked out.”

“We will be announcing in the not too distant future 100 percent of the caliphate” being decimated, Trump added, in sharp contrast with the assessment of the U.S. intelligence apparatus.

While U.S.-backed Syrian forces have continued the fight to retake the remaining Islamic State strongholds in Syria, the radical group remains a potent force of battle-hardened and well-disciplined fighters that could likely re-emerge in Syria absent continued counterterrorism pressure, according to the latest Pentagon Inspector General report released Feb. 4.

“According to the DoD, ISIS is still able to coordinate offensives and counter-offensives, as well as operate as a decentralized insurgency,” the report said.

With assistance from Nick Wadhams in Washington (Bloomberg News). To contact the reporter on this story: Roxana Tiron in Washington at rtiron@bgov.com