The Treasury Department plans to invest more than $1.5 billion over the next decade to migrate its systems and data to the cloud, according to a procurement forecast released Sept. 15.

The department plans to pursue a “shared service cloud infrastructure model in order to capture Treasury-wide efficiencies in access, contracting, and security,” according to the forecast. It currently maintains a community cloud environment built on Amazon Web Services Inc. infrastructure, though Treasury officials are seeking to expand a footprint with Microsoft Corp. and other providers in the future. Treasury’s spending growth with cloud service providers is expected to exceed 30% on a year-over-year basis, according to the document.

The department obligated $163 million on cloud services in fiscal 2018, according to Bloomberg Government’s market definition, with the majority of that spending on cloud software and on-premises, private cloud infrastructure. Given the current trend, BGOV projects Treasury’s total cloud spending to reach $230 million in fiscal 2020. 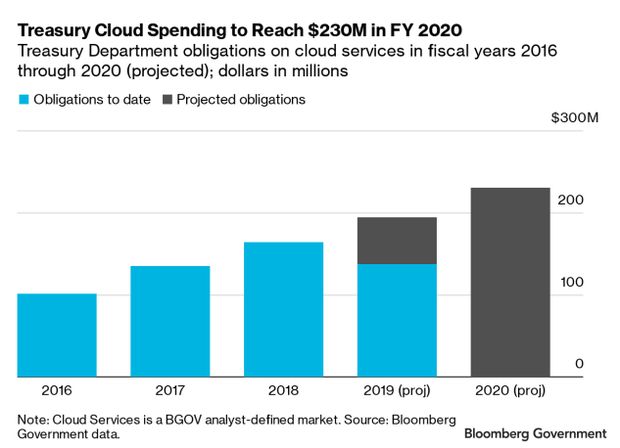 Treasury officials plan to conduct requirements gathering to identify common needs for commercial infrastructure as a service (IaaS), platform as a service (PaaS), and software as a service (SaaS) across the department. The agency will also offer commodity SaaS applications, such as email as a service and cyber threat monitoring, at a lower price point through bulk purchasing, according to the document.

Treasury’s move follows large-scale cloud migration strategies from the departments of Defense and Homeland Security as well as the Central Intelligence Agency (CIA). Like the Pentagon’s Joint Enterprise Defense Infrastructure (JEDI) program, the T-Cloud will be centrally managed as a shared service for Treasury subagencies. But like the CIA’s Cloud Computing Enterprise (C2E) program, the contract will use multiple cloud service providers, which may offer greater flexibility and limit the potential for costly bid protests.

Given T-Cloud’s expected size and scope, it will no doubt be a contract that cloud providers and systems integrators follow closely over the next two years.