The former chief of a Houston-based company, who is set to plead guilty to campaign finance crimes Friday, continued making hundreds of thousands of dollars in campaign contributions, including to top Republicans, for two years after an FBI investigation of the contractor was revealed.

James Dannenbaum gave a total of nearly $700,000 from early 2017 through June 2019, including more than $150,000 to the National Republican Congressional Committee and more than $50,000 to committees linked to House Minority Leader Kevin McCarthy (R-Calif.), according to Federal Election Commission reports.

“DEC engaged in a criminal scheme that undermined the fairness and transparency of our nation’s campaign finance laws in a misguided effort to increase its own power and prestige,” Assistant Attorney General Brian A. Benczkowski of the Justice Department’s Criminal Division said in a statement.

Dannenbaum was “within his rights” to continue making campaign contributions while facing an investigation for campaign finance violations, company spokesman Bill Miller said in an email. “Jim has always been a generous donor. Nothing new there.”

“The case has been in the news for a long time and our case is completely settled,” Miller said. “We have kept almost all our clients because of the quality work which we have carried out for 75 years.” 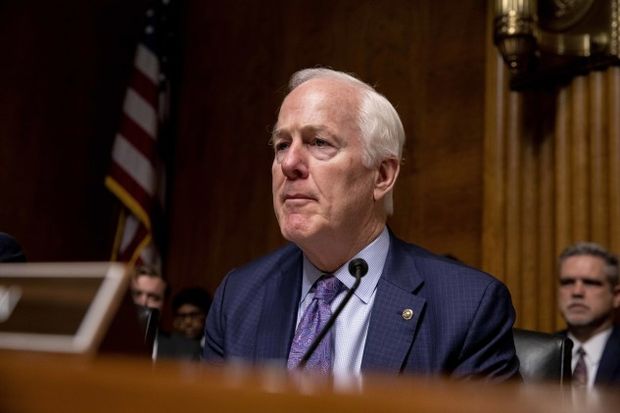 (Photo by Anna Moneymaker/Getty Images)
Sen. John Cornyn’s campaign said it would cooperate with the U.S. Attorney’s office
regarding illegal contributions from Dannenbaum.

Sen. John Cornyn (R-Texas), who is up for re-election next year, indicated he would give to the U.S. Treasury contributions he received from Dannenbaum, but it wasn’t immediately clear whether others would follow suit. The list of recipients includes more than a dozen current and former members of Congress, including Houston-area House Democrats.

Cornyn’s potential Democratic challengers MJ Hegar and former Rep. Chris Bell have criticized the senator for taking the money. The Cornyn campaign said in a statement it was “not aware of what Mr. Dannenbaum was doing, and we will fully cooperate with the U.S. Attorney’s office. We take great strides to ensure all contributions are proper and follow the law.”

The company agreed to remove the 80-year-old Dannenbaum from his leadership position as part of the deal. In addition, the company pledged to end politically related payments to employees disguised as “marketing advances” and implemented a new ethics and compliance program. The move marked a major fall for Dannenbaum, a Houston philanthropist and former University of Texas regent, whose company helped build many of the transportation and public works projects in the Lone Star State.

The federal campaign committees receiving Dannenbaum Engineering’s corporate contributions weren’t aware that they were illegal at the time they were given, according to the Justice Department. Campaigns that receive such funds are required by FEC regulations to send those contributions to the U.S. Treasury once they become aware that they are made illegally.

The fine on Dannenbaum was one of the largest ever imposed in a campaign finance case. Last year, health care company Cancer Treatment Centers of America settled a civil enforcement case with the Federal Election Commission and agreed to pay a $288,000 fine for making nearly $700,000 in illegal corporate contributions through straw donors.

The agreement is intended to allow the company to emerge without a criminal conviction, while a guilty plea might have prevented Dannenbaum Engineering from being able to work on government contracts – a virtual corporate death sentence for the firm, which specializes in large infrastructure projects.

The company also was involved in a preliminary plan by Hidalgo County, Texas, to seek $379 million in federal funding to complete levees and barriers on the Mexican border as part of President Donald Trump’s border wall, according to a map and letter prepared with Dannenbaum’s help for a 2017 meeting of the county’s drainage district board. The county abandoned the plan because of local opposition to the border wall. Company spokesman Miller said Dannenbaum Engineering has not been involved in any border projects since 2012.

The manager who helped hatch the straw donor scheme wasn’t identified in court papers but matched the description of Louis Jones, head of the company’s South Texas operations, who committed suicide last year following FBI raids that led to bribery convictions in 2018 of two local officials, Jaime Canales and Johnny Amaya. The bribes totaling $17,500 were disguised as campaign contributions and paid by a civil engineering company matching the description of Dannenbaum Engineering, according to an indictment filed in federal court.

With assistance from Daniel Snyder