Another stopgap budget measure from Congress this month would threaten a raft of defense programs including the F-15EX fighter jet, Ford-class aircraft carriers, and President Donald Trump’s new Space Force, according to the Pentagon and military services.

The Air Force had asked to buy eight of the Boeing Co. F-15EX jets for $1.1 billion but that pricing could increase if a purchase is delayed by a continuing resolution longer than six months, the service said. The Navy says it risks missing a May payment on two new carriers and shouldering potentially higher total purchase costs.

“A CR does not allow us to create a Space Force,” said Jonathan Hoffman, chief Pentagon spokesman. The new military service to counter China and Russia is one of Trump’s signature defense proposals. 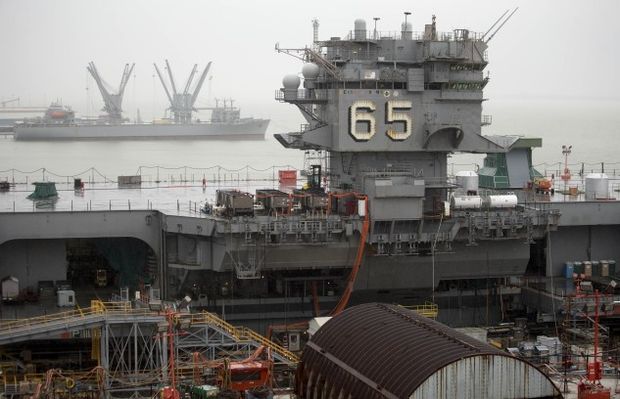 Hoffman rang the alarm bell during a briefing Thursday, and the Army, Air Force, and Navy have released detailed lists of potential disruptions from another continuing resolution. The current funding legislation passed in September (Public Law 116-59) expires Nov. 21 and Congress faces a partial government shutdown unless it passes another stopgap bill.

The department is in talks with lawmakers about potential anomaly funding, which could include money for some key programs in a continuing resolution, Hoffman said. Anomaly funding covers exceptions to maintaining spending at fiscal 2019 levels under the CR.

“We would like to see Congress find ways in the CRs to fund those but the bottom line is a CR top to bottom is debilitating,” Hoffman said. “We lose buying power, we lose predictability with our contracting, we lose our ability to train on exercises.”

Trump began touting a Space Force, a sixth service branch focused on space warfare, during campaign rallies last year. The Pentagon has requested $72 million to set up a headquarters.

The Air Force said the F-15EX is among 26 new programs that would be delayed under a six-month continuing resolution, forcing the service to maintain its aging F-15C fleet longer than expected. The figures were included in a document produced by the service last month.

The number of delayed programs would climb to 88 if the stopgap lasts a full year, disrupting Global Position System III Follow-On space vehicle purchase. The program is slated to replace a global-positioning follow-on satellite in the U.S. constellation that has outlived its lifespan. In September, the Air Force awarded a $7.2 billion contract to Lockheed Martin Corp. for 22 GPS III Follow-On satellites.

The Navy would have to delay delivery of a Virginia-class fast-attack submarine, as well as a fleet tug and landing craft, under a continuing resolution lasting into February.

“All of these assets are critical to our ability to pace threats and deter and defeat near-peer adversaries,” Lt. Tim Pietrack, a Navy spokesman, said in a statement. The Marine Corps, which is part of the Navy Department, said Thursday it was still compiling a public list of potential effects.

The planned refueling of the USS John C. Stennis requires annual appropriations for early material purchases to begin on time in January 2021. The service could be forced to renegotiate the contract and costs of the future Ford-class carriers Enterprise and unnamed CVN 81 if it misses the required May 1 payment.

The service could lose another $3.5 billion in funding for procurement and research and development if the budget remains in limbo through next September when the fiscal year ends.