The U.S. would be allowed to set its own rates for the delivery of small international packages while still remaining in the 192-country Universal Postal Union under a plan pushed by the State Department.

President Donald Trump announced on Oct. 17, 2018, that the U.S. was starting the one-year withdrawal process from the postal union, a 145-year-old United Nations organization that regulates global mail delivery. But if the postal union could overhaul its rules, the president said, the U.S. would rescind the notice and remain. 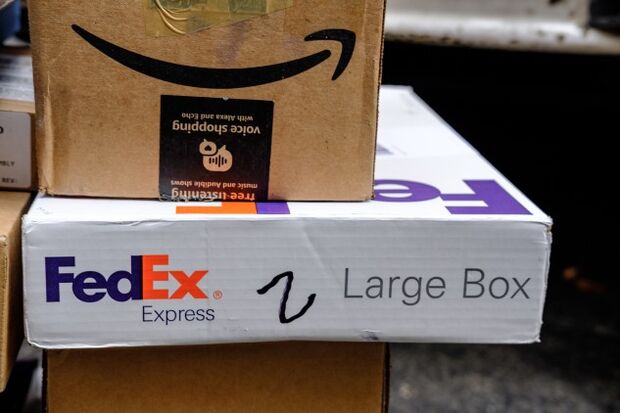 Amazon.com Inc. and FedEx Corp. are among shippers who could be affected by a plan pushed by the State Department that would allow countries to set their own rates for delivery of small international packages. (Photo: Christopher Lee/Bloomberg)

Murphy declined to discuss what would happen if the proposal failed, “because our goal is to succeed in this effort and to remain in the UPU.”

The president’s primary concern is the highly subsidized rate set by the UPU for delivery of lightweight packages sent from countries such as China, known as terminal dues. That rate, far less than the domestic delivery cost charged by the U.S. Postal Service, puts American businesses engaged in e-commerce—from small retailers to large manufacturers—at a disadvantage.

The rate also significantly undercuts private carriers such as FedEx Corp. and UPS Inc. that offer international shipping but cannot compete against the subsidized rates set by the UPU.

Trump, in the October statement, directed postal regulators to set self-declared rates for terminal dues as soon as practicable, and no later than Jan. 1, 2020. The Postal Regulatory Commission and U.S. Postal Service have begun that process.

Still, once the U.S. sets its own, higher rates for delivery of packets from other countries, it is likely foreign postal services will raise their prices as well, putting greater costs on American exporters.

Eggs in One Basket

Working committees of the UPU are scheduled to meet in April to consider two options for moving forward, and the State Department is urging the adoption of an amendment to the UPU agreement, called Option B, that would allow the U.S. to self-declare rates for inbound delivery of small packets and bulky letters. This is the only option that will satisfy the White House, Murphy said.

Although the text of the amendment is not public, the option would require that if a country self-declared rates, it has to make that rate available to every other country; no countrywould be required to self-declare rates; and those rates could not be higher than the country’s domestic retail rate, Murphy said.

“There are right now about 30 countries that actively support the U.S. position,” Murphy told the advisory committee, adding there is a similar number of countries that support the other option, which would accelerate the rate increases already approved by the UPU.

There are 192 member countries in the UPU, each with one vote, and it would take a two-thirds vote to approve a pact amendment between the group’s scheduled quadrennial meetings, Murphy said.

To contact the reporter on this story: Cheryl Bolen in Washington at cbolen@bgov.com