The Health and Human Services and Veterans Affairs departments dominated health IT spending from fiscal 2014 through 2018 with 89 percent of the federal civilian market and 69 percent of the overall government health IT market.

The Defense Department’s spending accounted for 22 percent of the federal health IT market from fiscal 2014 through 2018. The Office of the Assistant Secretary for Health Affairs ($4.2 billion since fiscal 2014), the Army ($2 billion), and the Navy ($1.5 billion) were the Pentagon’s three biggest-spending bureaus. 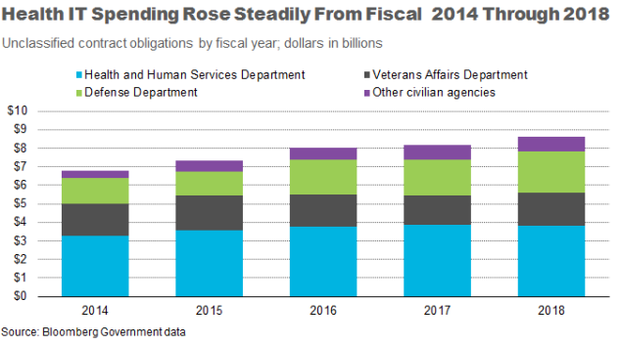 Contracts with increased health IT obligations from fiscal 2017 to 2018 showed significant growth in electronic health records and telemedicine spending.

Then-Veterans Affairs Secretary David Shulkin announced in 2017 that the VA would adopt the Defense Department’s electronic health records system and that the contract would go to Cerner Corp. to fast-track the acquisition process. After about a year of negotiations, Congress approved the plan and in May 2018 the VA awarded Cerner a 10-year, $10 billion contract to modernize its EHR and make them compatible with DOD’s system. VA obligated $495 million toward the effort in fiscal 2018, which accounts for much of VA’s health IT spending increases from fiscal 2017 to 2018.

Defense Department EHR spending was also up in fiscal 2018, to $338 million from $153 million in fiscal 2017. The major DOD EHR contract is its 10-year, $3.4 billion Defense Healthcare Management System Modernization contract. Leidos Inc. is the prime contractor, and there are dozens of subcontractors, including Cerner, which has been awarded $337 million of the $798 million obligated since fiscal 2015.

About $832 million of $13.4 billion has been spent on the DOD and VA EHR contracts so far. However, the contract ceilings still allow for $9.5 billion in VA EHR spending in the next nine years and $2.6 billion at DOD in the next six and a half years. If DOD and VA obligations approach those ceilings in the coming years, that spending alone will expand the federal health IT market.

The VA also increased its fiscal 2018 obligations for telehealth, another submarket that’s likely to continue to grow. VA has obligated $80 million to IT telehealth products and services since fiscal 2014. More than half of that, or $44 million, was awarded in fiscal 2018.

Although spending isn’t substantial, recent developments indicate obligations will continue rising in fiscal 2019 and future years. In May, VA announced that its health care providers could provide medical care to veterans using telehealth, even if that care crosses state lines. The rule supports VA’s “Anywhere-to-Anywhere” initiative aimed at extending and improving care, with a focus on mental health, to veterans who don’t live near a VA medical facility.

The VA expanded that initiative in December by partnering with Walmart Inc. to reach veterans in rural communities.

Some Walmart locations will donate space to establish telehealth stations, which will make it easier for the many veterans who live closer to a Walmart than a VA facility and don’t have telehealth technology in their homes.

Along with initiatives to make health care more accessible to veterans, VA continues to look for contractor help in the telehealth market. For example, the Bronx (N.Y.) VA Medical Center posted a solicitation on Jan. 25 for a variety of telehealth products, including telecare record management, software to improve organizational decision making, and triage automation software. Responses are due on Feb. 8.

To find more telehealth opportunities, save this keyword search in Bloomberg Government’s Opportunity Search and set an alert to receive emails when new solicitations are posted or a contract or task order is expiring.

To contact the analyst: Laura Criste in Washington, D.C. at lcriste@bgov.com