Democratic and Republican groups raising tens of millions of dollars for the 2020 elections increasingly are keeping their funding sources secret, a trend that watchdog groups warn allows high-dollar donors to gain influence with candidates without risking exposure.

Priorities USA, which collected almost $200 million to help Hillary Clinton in 2016, says it wants to spend that much or more to help the next Democratic nominee defeat President Donald Trump.

This time, however, Priorities is being funded mostly by undisclosed donations. More than three-quarters of the $23.4 million it raised in the first half of year was collected by a nonprofit arm, organized under Section 501(c)(4) of the tax code, according to a statement from the group. The nonprofit isn’t required to report donors to the public. The group didn’t have a nonprofit arm in 2016.

America First, the main campaign spending group supporting Trump, is off to a slower fundraising start than the Democrats’ group and is also relying heavily on undisclosed contributions.

Critics call undisclosed donations “dark money” and say it’s the most damaging cash in a campaign finance system where spending by groups not formally linked to candidates has skyrocketed. Contributions to outside groups are unlimited; meanwhile, federal candidates can collect no more than $2,800 per election from each individual contributor, and all donations must be disclosed.

“Dark money is a vehicle for wealthy donors and special interests to curry favor without accountability,” said Michael Beckel of the nonprofit watchdog Issue One. “Voters don’t know where the money is coming from, but the candidates often do.”

The amount of secret money has been increasing in federal elections, Beckel said in a phone interview. He said Republican groups in the past relied more heavily on groups funded by undisclosed contributions, but Democrats caught up with and then surpassed Republicans in this category in the 2018 midterms.

New No.1 Secret-Money Spender Wants to Flip Senate for Democrats 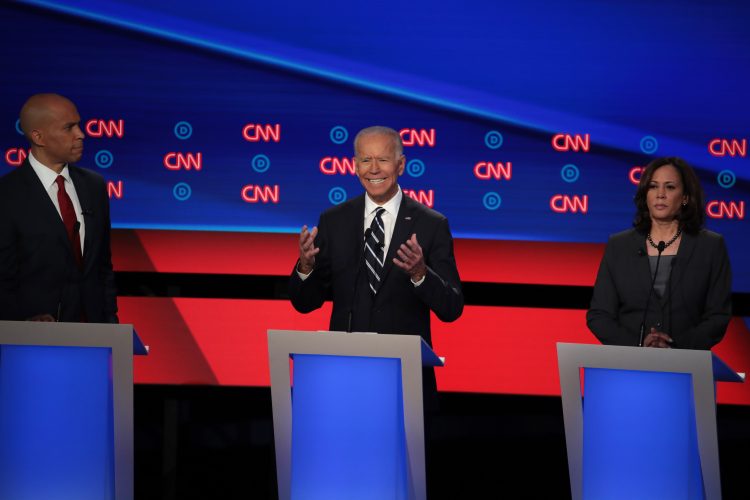 The contributions, mainly from from familiar, wealthy Democratic donors and unions, were reported to the Federal Election Commission Wednesday, the deadline for many PACs to file their first financial reports of the 2020 election cycle. Donald Sussman, founder of the investment fund Paloma Partners, was the biggest donor to the Priorities Super PAC, giving $2 million, followed by an affiliate of the Laborers International Union of North America, which gave $1.5 million.

Big early contributors to the Priorities super PAC in the last presidential election included familiar Democratic donors such as George Soros, Steven Spielberg, Jeffrey Katzenberg, and Haim and Cheryl Saban, who gave $1 million each in the first half of 2015. None of these contributors were on the super PAC’s latest report filed with the FEC Wednesday, listing contributors for the 2020 election.

The $18.6 million from undisclosed contributors collected this year by Priorities’ nonprofit arm has been used for polling and research ahead of the 2020 election, hiring staff in the presidential battleground states Florida, Wisconsin, Michigan and Pennsylvania, and sponsoring digital ads arguing that Trump’s economic policies harm middle and working class Americans.

“Priorities is uniquely positioned to hold President Trump accountable at a time when many of our allies are focused on the primary,” Guy Cecil, Priorities USA President said in the group’s statement.

Linda McMahon, a major Republican donor who was appointed by Trump to head the Small Business Administration, left that post earlier this year to help jump-start fundraising at America First.

“My first order of business as Chair of America First Action is to crush our fundraising goals and ensure we have every dollar we need to fight off each of President Trump’s enemies in 2020,” McMahon said in a statement released by the group.

The America First Action super PAC’s latest FEC report listed McMahon as one of its biggest donors in the first half of the year. She gave $1 million, surpassed only by Los Angeles developer Geoffrey Palmer. Other past Trump supporters, including Cherna Moskowitz, Marlene Ricketts, and Dick and Liz Uihlein, gave big again this year to the super PAC.

Absent from the donor list, so far, is Sheldon Adelson, the Las Vegas Sands Corp.founder, who along with his wife, Miriam, has been the biggest giver to Republican-allied groups in recent years. Adelson, who is 85 and has non-Hodgkins lymphoma, wasn’t on a recent Las Vegas Sands earnings call, according to a report in the Las Vegas Sun. Company executives said he was feeling well and would be on the next call in October.

Even as dark money is growing, the role of super PACs supporting a single presidential candidate, which were prominent in the 2016 primaries, is diminished this year, according to Adav Noti of the nonprofit Campaign Legal Center.

The 2020 Democratic challengers to Trump are being swayed by “widespread popular concern about big-money political corruption, and so they’ve decided not to engage in the super PAC game,” Noti said. “We’ll see how long that lasts, but it’s certainly a promising start.”

Many of the Democrats running this year have publicly declared they don’t want help from super PACs during the primaries, but the primary candidates haven’t ruled out, if they win the nomination, receiving help from these outside groups against Trump during the general election.

The Congressional Leadership Fund, a super PAC aligned with House Republican leaders, said in a joint statement with the nonprofit American Action Network that the groups had raised a combined $19.3 million. Only $4.8 million came from disclosed contributions to the super PAC.

The House Majority PAC , a super PAC aligned with Speaker Nancy Pelosi (D-Calif.) and other Democratic leaders, discussed in a statement only the $8.1 million in disclosed contributions reported to the FEC Wednesday. This super PAC said it received more than 86,000 individual contributions, with an average online contribution of $13.49. It also took in millions of dollars from big donors, including Sussman and LIUNA, the laborers’ union.

Despite the proliferation of dark money, congressional Democrats, along with the party’s presidential contenders, are appealing to voters with messages focused on ending corruption by overhauling election and campaign finance laws and reversing the Supreme Court’s 2010 decision in Citizens United v. FEC. That ruling struck down limits on corporate money influencing federal elections and led the way to sharply increased campaign spending.

The Citizens United decision “opened the floodgates for dark money to pour into our elections and tipped the scales in favor of the ultra-wealthy and the most powerful corporations,” Senate Democratic Leader Chuck Schumer (N.Y.) said this week at a rally on the steps of the Supreme Court.

Sen. Tom Udall(D-N.M.) defended his party’s reliance on dark money, for now. “Until we are successful in enacting the change we need, suggestions that we should unilaterally disarm are unserious,” he said an an emailed statement.

To contact the editors responsible for this story: Bennett Roth at broth@bgov.com; Robin Meszoly at rmeszoly@bgov.com