Senate Republicans are honing their playbook for distancing themselves from Trump‘s remarks, while avoiding criticizing him by name or taking any concrete action.

The strategy was apparent yesterday as GOP lawmakers made clear they disagreed with Trump’s ABC News interview in which he said he’d accept a foreign government’s offers of dirt on a political opponent without necessarily calling the FBI. Yet most of them stopped short of directly rebuking him or saying they would take up legislation to clearly make such conduct illegal.

This has become a familiar act from Republicans who often disagree with their president yet are wary of being the subject of his ire — especially on Twitter. With 22 Republican senators up for re-election in 2020 on the same ballot as Trump, they are trying to avoid becoming casualties of his unpopularity among the general public without alienating his staunchest supporters.

Some of the most vulnerable of those Republicans, like Cory Gardner (Colo.), Joni Ernst (Iowa) and Susan Collins (Maine), responded to questions about Trump’s comments by saying campaigns should not take such information and should call the FBI.

“Just say no,” should be the president’s response to political help offered by foreign nationals, Gardner said. “Turn it over.”

“If there’s information coming in, certainly I would be notifying the authorities on that,” Ernst said. Asked if the president’s son, Donald Trump Jr. should have notified the FBI when Russian nationals offered him dirt on Hillary Clinton, Ernst nodded yes.

“In my judgment, the proper action for the president or any other federal official to take when contacted by a hostile foreign government with information or an offer of assistance is to call the FBI,” Collins said. Read more from Steven T. Dennis and Laura Litvan. 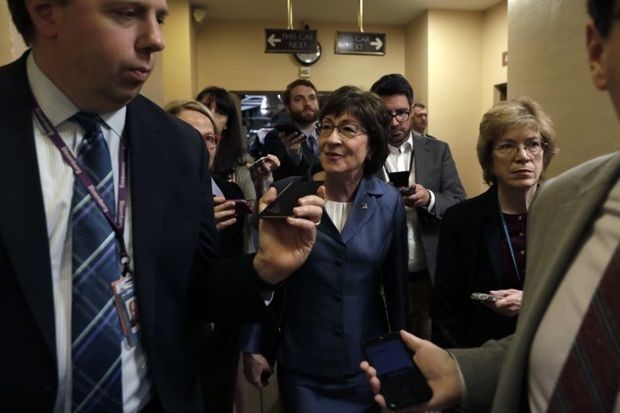 Photographer: Yuri Gripas/Bloomberg
Sen. Collins speaks to reporters at the Capitol in March

Ways and Means Chairman Richard Neal (D-Mass.) will lead the group that will negotiate directly with U.S. Trade Representative Robert Lighthizer. The members will focus on four areas, including Rep. Earl Blumenauer (D-Ore.), chairman of the trade subcommittee, who will cover drug price provisions with Rep. Janice Schakowsky (D-Ill.).

Negotiating the labor measures will rest on Reps. Mike Thompson (D-Calif.) and Jimmy Gomez (D-Calif.). Reps. Suzanne Bonamici (D-Ore.) and John Larson (D-Conn.) will tackle the accord’s chapter on environment. Strengthening enforcement of all these provisions will be handled by Reps. Terri Sewell (D-Ala.) and Rosa DeLauro (D-Conn.). Read more from Jenny Leonard.

Senate Passes IRS Bill, Sends to Trump: The Senate unanimously passed a bill yesterday to retool parts of the IRS and lay down groundwork for more change, sending the legislation to Trump for his signature. While passing the bill took longer than lawmakers had initially hoped, it marks a major tax policy achievement for this congressional session. The White House declined to comment over whether Trump will sign the measure. Read more from Kaustuv Basu.

Cicilline’s Role in Tech Antitrust Scrutiny: The politics of antitrust, which have basically been a non-issue throughout the digital age, have shifted. Anger at Silicon Valley may now be the only significant area of bipartisan agreement in Washington. Rep. David Cicilline (D-R.I.), chairman of the House Judiciary’s subcommittee on antitrust, is emerging as a key player in the fight against big tech. Joshua Brustein takes a closer look at his history and the role he could play.

Extending Opportunity Zone Investment Deadline: An original author of the 2017 tax revamp’s opportunity zone tax breaks said he plans to introduce a bill extending a deadline for investors before the August recess. Sen. Tim Scott (R-S.C.) said he’s working out some disagreements over the measure with Sen. Cory Booker (D-N.J.), the other original author of such incentives. “We’re trying to harmonize our approaches,” Scott said. Lydia O’Neal has more.

Warren’s Populist Positions Echo Trump: Sen. Elizabeth Warren (D-Mass.) presents herself as the antithesis of Trump, yet they share a populist economic vision as they seek to channel the grievances of working-class Americans who have been left behind by globalization. The Democrat and the Republican have called for wielding the power of the state to protect American industries from foreign competition with actions like tariffs against trading partners and interventions to curb the value of the dollar.

Trump rode his rhetoric to the White House in 2016. Warren, who has been an advocate for protectionist measures in Congress, is betting that a similar message will help her capture her party’s nomination and win back the industrial Midwestern states that handed Trump the presidency. Read more from Sahil Kapur.

DNC Reveals 20 Candidates for Debates: The Democratic National Committee unveiled the list of candidates who will take part in the first presidential primary debates of the 2020 election. The debates, set to take place over two nights with 10 candidates on each stage, will take place in Miami June 26 and 27. The group participating each night will be selected at random. Read the full list here.

Casino Chiefs Favor Democrats: Las Vegas is America’s gambling playground, and one of the casino industry’s highest-stakes games is partisan politics. Some of the biggest names on the Strip — Las Vegas Sands, Wynn Resorts and Red Rock Resorts — have ties to Republicans through donations or high-profile political involvement by executives such as Las Vegas Sands Corp. Chairman Sheldon Adelson.

But a deluge of California transplants and a growing population of Latinos and Asians, many of whom work in the industry, are transforming Nevada politics — and with it the casinos, some of which are putting more of their chips on Democrats. Read more from Jeffrey Taylor and Bill Allison.

Amazon Takes on Biden Over Taxes: Amazon yesterday responded to criticism from former Vice President Joe Biden about its tax rate, saying the company had paid $2.6 billion in corporate taxes since 2016 and that his complaint should be with the tax code, not the online retailing giant itself. In a tweet, Amazon said it pays “every penny” it owes, adding that U.S. tax laws were designed to encourage companies to reinvest in the U.S. economy. Earlier, aspiring Democratic presidential nominee Biden had tweeted that Amazon paid a lower tax rate compared to firefighters and teachers. Read more from Sebastian Tong and Matt Day.

U.S. Says Iran Involved in Tanker Attack: American officials released images they said show that Iran was involved in an attack on an oil tanker near the entrance to the Persian Gulf yesterday, one of a pair of incidents that have raised tensions between the U.S. and the Islamic Republic over the past day.

An Islamic Revolutionary Guard Corps patrol boat “was observed and recorded removing the unexploded limpet mine from the Kokuka Courageous,” one of two tankers attacked on Thursday, according to Navy Captain Bill Urban of the U.S. Central Command. That was after another mine had already detonated, damaging the ship, the U.S. said.

Adding to the intrigue, Yutaka Katada, the president of tanker operator Kokuka Sangyo, said today in Tokyo that the Kokuka Courageous crew saw a projectile hit the ship and believed it was unlikely the vessel was hit by a mine. The company couldn’t say whether the ship was attacked by Iran or whether an Iranian vessel removed a mine, another company official said. Read more from Margaret Talev.

Sanders Quits as Press Secretary: White House Press Secretary Sarah Sanders is leaving the Trump administration after a turbulent tenure—marked by attacks on the media, dissemination of false information and the near-disappearance of the daily press briefing. At a White House event yesterday evening, Sanders said it was an “honor of a lifetime” to serve under the Trump administration. Asked if she later if she plans to run for governor in her native Arkansas, she didn’t rule it out. Read more from Justin Sink.

U.S. Wants to Stall Digital Tax: The Trump administration is deep in talks with 129 other countries on implementing a new standard for taxing digital companies, including Google, Facebook and Amazon — but its heart lies elsewhere in the discussions. Rather than usher in a new era of tech taxation with allies, the U.S. goal is to fend off foreign taxes aimed at American companies. The strategy: String out the negotiations for as long as possible to delay the pain and hold out for an agreement with softer edges, say people involved with and briefed on the talks at the Organization for Economic Cooperation and Development.

By slow-walking the discussions, American officials hope they can reach a global agreement that amounts to a small-scale tax increase on global companies, but averts a massive tax increase by foreign countries who see U.S. companies as sources of revenue. Read more from Laura Davison.

White House Says It Will Meet Deadline to Ban Huawei: The administration assured Congress its federal agencies will meet a two-year deadline to comply with a ban on deals with Huawei Technologies. The bill passed in 2018 bars the government from entering into contracts with Huawei or buying gear from the Chinese firm, which has been cited as a security threat by U.S. officials, reports Todd Shields.

Health Reimbursement Arrangements Expanded: Workers will have new options to use employer-reimbursement accounts that get tax breaks to buy health coverage on the Obamacare markets under a new Trump administration rule. The rule, released yesterday, expands the uses of health reimbursement arrangements, or HRAs, so they can be used for more health expenses, including Affordable Care Act plans, certain Medicare coverage, and limited excepted benefits. Health reimbursement arrangements are accounts offered by employers that can cover health expenses up to a specified dollar limit. Read more from Madison Alder.

White House to Cap Gig Worker Protections: The administration is limiting legal protections for many gig workers, top prosecutors at the Department of Labor and National Labor Relations Board told Bloomberg Law. A pair of recent agency memos sketch out the administration’s approach to the hotly contested question of whether Uber drivers, Postmates food deliverers, and other gig workers are employees or independent contractors, Labor Solicitor Kate O’Scannlain and NLRB General Counsel Peter Robb said in separate interviews. The missives a re tailored to specific factual circumstances, but they show that the agencies are likely to find many gig workers are contractors. Read more from Chris Opfer.

Turkey Works to Counter U.S. Sanctions: Turkey is working on its own counter-measures against anticipated U.S. sanctions over the purchase of the S-400 Russian missile-defense system under orders from President Recep Tayyip Erdogan, a senior Turkish official said today. Turkey is analyzing products imported from and exported to the U.S. as part of its possible response, the official said on condition of anonymity, citing the sensitivity of the matter. Turkey is ready to bear any consequences of its move to defend its independence and freedom, Foreign Minister Mevlut Cavusoglu said. Read more from Firat Kozok and Selcan Hacaoglu.