President Donald Trump has likened the House impeachment inquiry led by Rep. Adam Schiff to a “kangaroo court,” while his Republican colleagues have accused him of lying and waging a witch hunt.

The skills that Schiff (D-Calif.) honed during a six-year law-enforcement career that culminated in the 1990 espionage trial of fired FBI agent Richard Miller prepared him for his current role, according to former colleagues and supervisors worked with him in the U.S. Attorney’s Office for the Central District of California in Los Angeles.

“When you watch Adam work these days you are seeing exactly the way he was in the U.S. attorney’s office,” said Gary Feess, who was the chief deputy assistant U.S. attorney in Los Angeles during part of the time Schiff worked as a federal prosecutor there from 1987 to 1993.

“He was quiet, he was methodical, he was thoughtful, he was very articulate in a low-key way, all of the things you see when he stands in front of the cameras in a quiet, but effective fashion, as he sort of lays out the case,” said Feess.

The white-collar criminal cases that Schiff, 59, prosecuted, such as fraud or political corruption “were complicated and took time to put together,” Feess said in an interview. 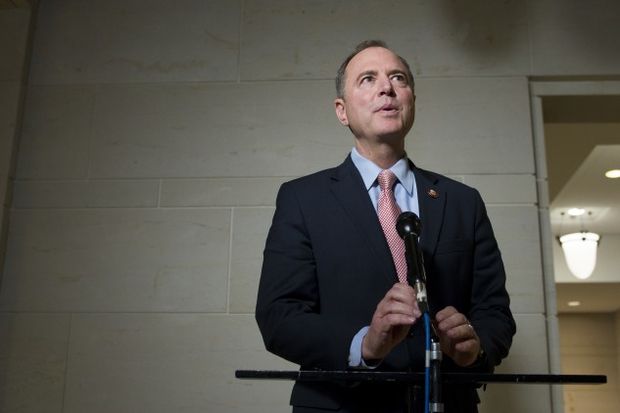 As chairman of the House Intelligence Committee, Schiff is shepherding the effort to determine whether Trump should be impeached for trying to enlist Ukraine’s help to investigate Democratic presidential hopeful Joe Biden and his son Hunter’s business dealings in that country when his father was vice president.

But Schiff’s prosecutorial approach has also tripped him up and provided fodder for Republican rebukes.

At a Sept. 26 hearing he attributed to Trump words the president didn’t utter on the call with the Ukraine president in a riff that Schiff said amounted to “the essence of what the president communicates” to Zelenskiy in “a classic organized crime shakedown.”

Former colleagues likened the performance to a prosecutor’s closing argument at trial.

But Republicans seized on the incident, along with Schiff’s subsequent concession that he should have been clearer the whistleblower contacted the committee before filing the complaint, arguing he’s leading a partisan effort to overturn the 2016 election results and preempt the 2020 vote.

Trump has repeatedly referred to him as “Shifty Schiff,” and Trump tweeted that he wanted Schiff “questioned at the highest level for Fraud & Treason.’’ House Minority Whip Steve Scalise (R-La.) tweeted that the chairman was a “proven liar.”

Rep. Andy Biggs (R-Ariz.) introduced a resolution (H. Res. 630) to censure Schiff for offering a version of the call “that was absolutely just untrue.”

Schiff’s office did not respond to a request for an interview.

Schiff’s committee is piecing together the complicated sequence of events leading up to Trump’s July 25 phone call with Ukraine President Volodmyr Zelenskiy. On that call, the president asked his counterpart to investigate unfounded allegations that Ukraine interfered in the 2016 election to help Democratic nominee Hillary Clinton and that as vice president Biden pushed Ukraine to quash an investigation of his son.

His committee is one of three involved in the investigation along with the Foreign Affairs and Oversight and Reform panels.

Speaker Nancy Pelosi (D-Calif.), designated Schiff to spearhead the refocused impeachment probe after a whistleblower’s allegation surfaced last month. He showed his determination not to be stymied by the same kind of stonewalling the White House applied to the House Judiciary Committee, which has tried with little success to hear directly from witnesses cited in Special Counsel Robert Mueller’s report on Russian interference in the 2016 election.

The committee subpoenaed the former U.S. ambassador to Ukraine, Marie Yovanovitch, as soon as the White House directed her not to testify, according to a statement by Schiff and the chairmen of two other committees conducting the probe.

Gordon Sondland, the U.S. ambassador to the European Union whom the administration instructed not to show up at a deposition, is set to testify under subpoena Oct. 17. Schiff has an ambitious schedule of depositions of current and former administration officials knowledgeable about the events leading up to the Trump-Zelenskiy phone call.

“With the impeachment focus on the national security issue and Adam Schiff being much more the face of it” has given House Democrats “some confidence it will be well handled,” said Rep. Peter Welch (D-Vt.), who sits on the Intelligence Committee.

The evidence that Miller passed a classified manual of U.S. intelligence needs to Soviet spies in return for promises of $65,000 in cash and gold was “circumstantial” because “Miller never confessed,” said former U.S. Attorney Robert C. Bonner, who hired Schiff and later assigned him to the Miller case.

The Miller case was a major embarrassment for the FBI, not just because one of their own was, for the first time, accused of being a Soviet spy. The dismissed agent’s extra-marital affair with Soviet emigre Svetlana Ogorodnikova, whom prosecutors contended recruited him to spy for her homeland, added a sensational and salacious element.

It also proved to be a big headache for the U.S. attorney’s office.

Miller’s first trial lasted three months and ended in a hung jury. A 1986 conviction that Bonner personally obtained after a four-month retrial was overturned on appeal in 1989 just as the U.S. attorney was awaiting Senate confirmation to become a federal judge. Miller was serving two life prison terms when the appeals court struck down the conviction because the trial judge had allowed evidence of polygraph tests given to the agent. Miller was released on bail for the third trial.

Schiff argued that Miller’s “brand of espionage was a crime of dollars and cents. It was a crime of lust. It was a crime of dissatisfaction.” Financial problems, a crumbling marriage and difficulties at work made Miller “ripe for recruitment” by the KGB, he said, according to news accounts of the trial. The judge, who decided the case instead of a jury, sentenced Miller to 20 years imprisonment. He was released from prison in 1994, with credit for time served after the first conviction.

Bonner, who left the bench in 1990 to head the Drug Enforcement Administration, said Schiff got the nod because “he tried cases, he got good results” and “for a prosecutor that means what? Guilty verdicts.”