The Nov. 5 ballot initiative is intended to send a “resounding message” that immigrants are part of the community regardless of legal status, said Zaira Livier, executive director of People’s Defense Initiative, the group pushing the measure.

Enacting the initiative would invite litigation and could lead to a new state law.

Arizona’s last law governing enforcement of U.S. immigration law — partly a “show me your papers” statute — got all the way to the U.S. Supreme Court, which ruled that it’s OK for law enforcement to ask for proof of citizenship when stopping a suspect for another reason. Backers of the ballot issue want to set limits on when and where police officers can ask about immigration status.

“If ever we could get this passed, it has to be now,” Livier said in a phone interview. 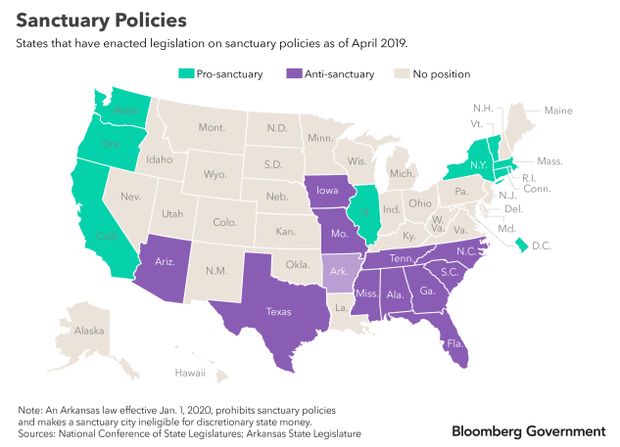 The ballot question in Tucson, roughly 60 miles north of the Mexican border, tries to thread a narrow path.

The initiative, known as Proposition 205, would change city code to direct police not to participate in any enforcement with a purpose of determining immigration status. Tucson police could work with federal officers only from agencies that sign an agreement limiting their power to make arrests and enforce civil immigration law.

Officers would be barred from using “racial proxies” such as style of dress or how a person talks to develop reasonable suspicion that a person is in the country illegally, Livier said.

They also would have to read a Miranda rights-like disclaimer before asking about immigration status and would be barred from asking about that status in a church, school, hospital, or a state or local court building.

“We do not touch what happens when someone is arrested,” Livier said. “We’re almost always talking about initial contact with police.”

The measure would create the right to sue over violations, with the revenue from civil penalties going to a community food bank.

The ACLU of Arizona and national ACLU spent about $105,000 to back the measure, according to an ACLU spokeswoman. In addition, Livier’s group reported raising almost $21,000 and receiving in-kind contributions worth about $89,000.

Opposition groups spent at least $300,000 to campaign against the sanctuary measure, according to city election finance reports filed. Companies and industry groupslargely funded that effort.

Opponents point to the potential for unintended consequences, as Arizona cities that violate state law can have their funding suspended.

Tucson Police Chief Chris Magnus said about $12 million in federal grants could be at risk.

However, almost every federal effort to withhold money from sanctuary cities has been unsuccessful in the courts, said Shefali Milczarek-Desai of the University of Arizona James E. Rogers College of Law.

And it’s “far from clear” whether the sanctuary initiative would violate the state immigration law known as S.B. 1070, Milczarek-Desai said.

Several Republicans in the state Legislature have said they’ll pursue legislation to penalize sanctuary cities in 2020.

State Rep. John Kavanagh (R), who co-sponsored S.B. 1070, plans to introduce legislation that would make jurisdictions with sanctuary policies liable if the policy prevents a convicted felon from being questioned or held for federal immigration enforcement and that person commits a crime in the following 10 years.

State Rep. Bret Roberts (R) said he’ll propose a path to restitution for those who become crime victims as a result of a sanctuary city policy.

He also wants state law to explicitly require compliance with U.S. Immigration and Customs Enforcement requests to detain people after they could otherwise be released.

Since the current law didn’t discourage the Tucson initiative, “apparently there needs to be more,” he said in a telephone interview.

Larry Lucero, a retired utility executive who is co-chairman of the No on 205 Committee, said the debate underway in Tucson would be better in the state Legislature.

“They will exact a punishment on communities they think step out of line,” Lucero said.

With assistance from Jodie Morris

To contact the reporter on this story: Brenna Goth in Phoenix at bgoth@bloomberglaw.com