The Silicon Valley district that Rep. Anna Eshoo (D-Calif.) represents in Congress is one of the nation’s most prosperous areas.

Half of households there make more than $125,000 per year, and seven-figure homes are commonplace in a district that sweeps up Stanford University in Palo Alto, the Googleplex in Mountain View, and Netflix’s headquarters in Los Gatos.

A continent away in the south Bronx, it’s a different story.

Rep. Jose Serrano (D-N.Y.) serves a poor, Hispanic-majority district where the median income is less than $30,000, the lowest of the 435 House districts and barely half of the national median of $57,617.

Those are among the findings in the Census Bureau’s American Community Survey estimates for 2016.

An important note: The numbers released today are estimates, based on data collected from a sample of U.S. households. The next full census is in 2020.

The highest-income districts are concentrated in northern California, metropolitan New York City and the Washington D.C. region, where the cost of living also is high.

Eshoo’s district has the highest median income of the 435 districts, followed by another Silicon Valley bastion, California’s 17th, where Democrat Ro Khanna is in his first term representing a district that includes the headquarters of Apple Inc. in Cupertino.

Khanna, a technology lawyer and former Commerce Department official, earlier this year visited one of the nation’s poorest areas: the eastern Kentucky district of Republican Hal Rogers, whose constituents have the second-lowest income. Khanna called attention to boosting technological innovation and training in areas outside Silicon Valley, like Rogers’s hardscrabble Appalachian district.

The wealthiest congressional districts include Virginia’s 10th, which runs from upscale Fairfax County west through fast-growing Loudoun County to the West Virginia border. Republican Rep. Barbara Comstock was re-elected there in 2016 while the district said no to Donald Trump. 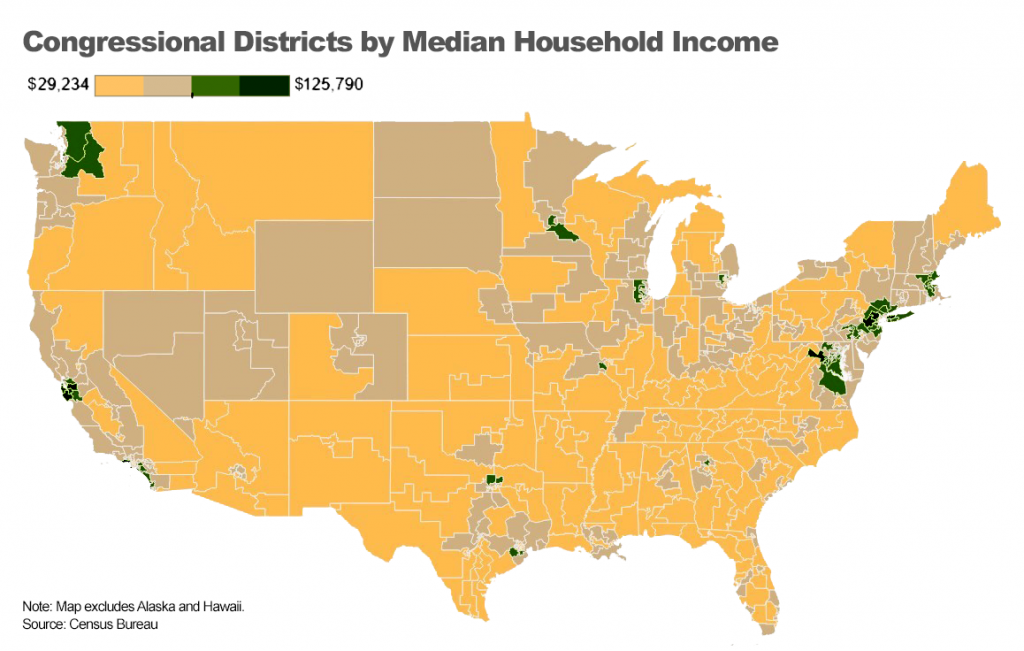 In Colorado Republican Doug Lamborn’s 5th District, more than one in six people of voting age has served on active duty in the Armed Forces, Reserves, or National Guard — the highest percentage in the nation. Lamborn’s district includes the Air Force Academy in Colorado Springs and the Fort Carson Army installation.

The districts with the next-highest shares of veterans are Navy strongholds — the Florida Panhandle district of Republican Rep. Matt Gaetz and the southeastern Virginia districts of Republican Scott Taylor and Democrat Bobby Scott.

Residents Who Served in the Military

Florida, a retirement haven, has nine of the 10 districts with the highest share of people who are at least 65 years old. The list is led by Republican Rep. Daniel Webster’s west-central 11th District, which includes The Villages, a huge and fast-growing senior community.

The youngest districts tend to be heavily Mormon or Hispanic, two groups that have more children on average than other groups.

Congressional districts have about 741,000 people on average, though there are differences within

The distribution of residents has political implications for the House after the next reapportionment of the 435 districts and subsequent redrawing of congressional maps. Congressional districts are supposed to be about equal in population within each state.

The most populous district that isn’t a statewide at-large seat is Texas’s 22nd in and around Houston, an area represented by Republican Pete Olson. Fast-growing Texas, with a 36-member House delegation that’s second only to California’s 53, is on track to again add seats after the 2020 Census.