Republicans are spending millions of dollars trying to hold onto a North Carolina House seat in danger of flipping to Democrats after an election scandal and a series of other setbacks for the party.

With a month until the Sept. 10 special election, Republican Dan Bishop has already received more than $2.6 million in support from a party campaign committee and other groups helping him battle Democrat Dan McCready, according to independent expenditure reports filed with the Federal Election Commission.

McCready, who ran last November in the original election voided due to absentee-ballot fraud, never stopped fundraising ahead of the do-over election. The businessman and Marine Corps veteran now holds a 5-to-1 funding advantage over Bishop, a state lawmaker who sponsored North Carolina’s controversial “bathroom bill” in 2016 aimed at requiring transgender people use public bathrooms that match their birth sex.

Republican groups are making up the difference in campaign money between the candidates, said Eric Heberlig, professor of political science at the University of North Carolina at Charlotte.

“This is the only competitive special election in the country, so the parties and allied interest groups have no other claims on their funds at this point in time,” Heberling said. He added that the race allows the parties to test campaign messages looking forward to the 2020 election in a relatively diverse district that includes urban and suburban areas around Charlotte, as well as more rural areas.

One pro-Bishop TV ad seeks to link McCready to prominent Democrats including House Speaker Nancy Pelosi (D-Calif.) Rep. Alexandria Ocasio-Cortez (D-N.Y.) and other members of the “squad” — four congressional Democrats whom President Donald Trump has singled out for criticism. Calling them “crazy, liberal clowns,” the ad features Democrats’ heads photo-shopped atop toy clowns. “I’ll go to Congress and fight these clowns for you,” Bishop vows in the ad.

The special election was ordered after absentee ballot fraud in last November’s midterm election prompted the House seat to be declared vacant. The Republican candidate, Mark Harris, said he wouldn’t run in the do-over election and a GOP consultant working for him, Leslie McCrae Dowless, now faces criminal charges due to the election scandal.

A raft of House GOP retirements in Texas and elsewhere has also prompted party leaders to redouble efforts to keep seats that have been in Republican hands. 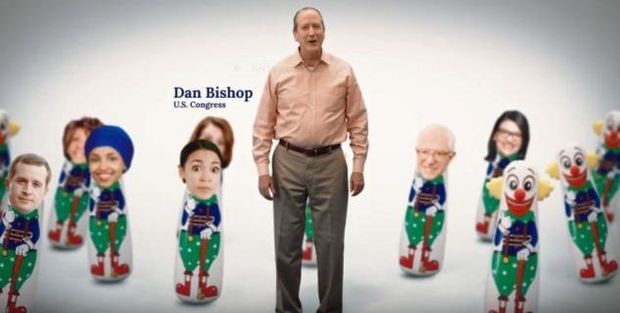 The National Republican Congressional Committee, the party’s House campaign arm, along with allied spending groups, have poured in money for TV ads and other messages aiding Bishop since July 1, according to FEC independent expenditure reports.

The NRCC and the Congressional Leadership Fund, a super political action committee aligned with House Republican leaders, have plans to spend a total of $4 million before Election Day, according to Advertising Analytics, a firm that tracks ad buys.

Funders of the NRCC and Congressional Leadership Fund include big Republican donors, such as Home Depot founder Bernard Marcus, hedge fund manager Paul Singer, and securities brokerage founder Charles Schwab. Money from undisclosed sources also comes to the super PAC through the nonprofit American Action Network. Other GOP-allied groups joining the effort include affiliates of the Club for Growth and the House Freedom Caucus.

Democratic-aligned groups, meanwhile have spent about $800,000 in the race, so far, according to FEC reports.

McCready has received $600,000 worth of support from ads sponsored by affiliates of the Environmental Defense Fund and $200,000 in support from Votevets.org, according to FEC reports. Neither of these groups discloses its funding sources; they tell the FEC they’re exempt from disclosure rules because the money they receive isn’t earmarked to pay for campaign ads.

McCready’s campaign committee, meanwhile, held nearly $1.8 million in cash at the end of June, according to its latest FEC disclosure report, while Bishop had slightly less than $350,000 in campaign cash.

Ads by the Republican groups in the race focus on McCready’s role as a founder of a firm investing in renewable energy and involvement with a nonprofit advocating for tax breaks and other rules favoring for renewables. “Greedy Dan McCready gamed the system,” a Congressional Leadership Fund ad says.

McCready’s involvement with renewable energy has been supported by ads sponsored by affiliates of the Environmental Defense Fund. The environmental group said McCready’s company helped create hundreds of local jobs and touted his role as a “problem solver” willing to work across party lines.

Votevets.org, another spending group supporting McCready, touted his military experience in its ads.

With assistance from Andrew M. Ballard