After using most of 2019 to confirm President Donald Trump’s nominees for federal courts and agencies, Majority Leader Mitch McConnell (R-Ky.) is shifting to giving the most endangered Republican senators a chance to highlight their work on defense, transportation, and trade.

Many of the projects, from an arsenal that brings jobs to Iowa to disaster aid for North Carolina, are sprinkled throughout the fiscal 2020 spending measures or the National Defense Authorization Act (S. 1790)

With time running short, it may make sense for McConnell to focus less on ambitious proposals and more on helping purple state lawmakers “bring home good stuff to their states,” said Sarah Binder, a senior fellow at the Brookings Institution.

Sen. Susan Collins (R-Maine) and Cory Gardner (R-Colo.) — among the most vulnerable senators up for re-election in 2020 — represent states won by Democrat Hillary Clinton in 2016.

McConnell’s plans would give them and other senators in competitive states, Thom Tillis (R-N.C.), Joni Ernst (R-Iowa) and Martha McSally (R-Ariz.) opportunities to talk up their military credentials. Meanwhile, Ernst and others are anxious to debate the new trade deal, the U.S.-Mexico-Canada Agreement, to appeal to farm state voters. 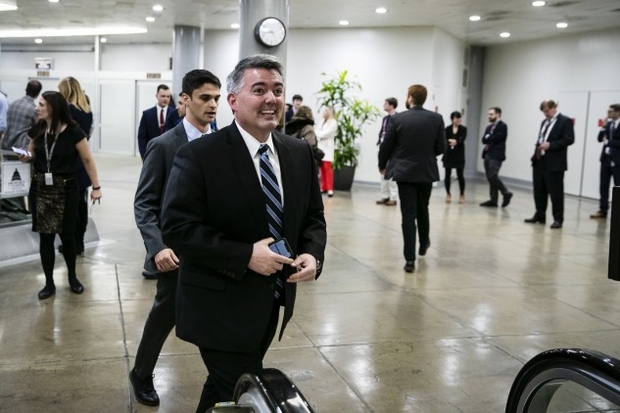 McConnell, who is also up for re-election next year, is anxious to finish work on the NDAA, which is being negotiated in conference with the House. Besides authorizing a record amount for the Pentagon, the bill could restore $63 million that McConnell sought for a Kentucky school at Fort Campbell that was in the $3.6 billion transferred by the president to fund the border wall.

McSally, who wants to recover $30 million for a transportation project at Fort Huachuca in Arizona, led an effort in the Senate to instruct NDAA conferees to “backfill” transferred project funds.

“We need to secure our border and protect our military; we can and should do both,” McSally said.

Ernst, who like McSally is a combat veteran and an Armed Services member, is highlighting “Iowa specific” items in NDAA, including provisions for Rock Island Arsenal, a large local employer. Both women, who are victims of assault, also want attention on language they worked on to prevent military sexual assault.

“I remain committed to working to change the culture surrounding sexual assault and retaliation in the military,” said Ernst.

Tillis is campaigning on the NDAA’s 3.1% military pay raise and the $2 billion promised for North Carolina’s military installations. That includes $1.4 billion for rebuilding projects after Hurricane Florence slammed the state, with $936.9 billion just for Camp Lejeune.

Tillis said he’s pursuing that at the same time he’s working with the federal government to provide assistance for communities recently hit by Hurricane Dorian.

“We have a lot of grants being asked for to rebuild,” Tillis said. “We need to get that done.”

Collins, who is seeking a fifth term, antagonized Republicans by not voting for Trump and for opposing repeal of the Affordable Care Act. But she also lost favor with Democrats for helping to lock in the confirmation of Supreme Court justice Brett Kavanaugh.

As chairman of the T-HUD subcommittee, she is reminding voters she helped win an outsize share of federal aid. Maine, she said, would get $62 million more because of extra highway funds she inserted into the bill. She also takes credit for a $59 million contract for Methuen Construction Co. to build a facility at the Portsmouth Naval Shipyard.

“As a senior member of the Appropriations Committee, I championed funding for this infrastructure project,” Collins said.

Gardner is pushing a bill Colorado wants that would allow legal cannabis businesses to access banking services and end their reliance on cash. The House passed the SAFE Banking Act (H.R. 1595) but it faces resistance in the Senate. Still, Gardner told lawmakers most states are easing their marijuana rules.

“It’s happening in the bluest of blue states, the reddest of the red, and in Colorado, the purplist of purple,” Gardner said.

But with McConnell silent on the matter Gardner is following other vulnerable Republicans’ lead and stressing his prowess in delivering local projects.

Gardner recently announced $15 million in road grants, and Denver’s Interstate-70 reconstruction project could be in line for much more if a new highway bill is enacted. Meanwhile, Gardner announced the NDAA carries $344 million for Colorado military installations.

“I will always fight to protect and grow the presence of the U.S. military in Colorado,” Gardner said.

To contact the reporter on this story: Nancy Ognanovich in Washington at nognanov@bgov.com