The Defense Department is consolidating many of its disparate “fourth estate” agency information technology systems into one single system providing a variety of services used across the department at both the unclassified and secret level.

The fourth estate is made up of agencies that aren’t part of the military services and handle such functions as administration and support services for health care and human resources, IT, research and development, and acquisition across the entire Defense Department.

The consolidation was directed by the DOD chief information officer in late 2018 to improve cybersecurity and customer support, and to save money, according to DISA. The effort is known as the Fourth Estate Network Optimization Project, according to a video briefing released by the Defense Information Systems Agency (DISA). The resulting single service will be called Defense Enclave Services (DES).

“The objective is to move the fourth estate’s common use IT systems, personnel, functions, and program elements associated with the support of those systems and technologies into a single service provider architecture,” said Drew Jaehnig, DISA’s chief of the consolidation effort, in a news release earlier this year.

DISA is seeking a single contractor to “integrate and consolidate the disparate networks into (1) single managed NIPR network environment and (1) single managed SIPR network environment,” according to the RFI. NIPR refers to “Non-classified Internet Protocol Router Network (NIPRNet),” and SIPR is “Secret Internet Protocol (IP) Router Network (SIPRNet).” Most of the fourth estate’s daily IT activity uses these networks. Services that will be provided fall into five categories:

Some functions listed under each category are inherently governmental and won’t be provided by the contractor.

Jaehnig said that the first phase of the effort was set to begin in fiscal 2019, which ended on Sept. 30, and the second phase is planned for fiscal 2022. The latest RFI provides the following schedule:

DISA hasn’t provided an estimated value for the project, but the RFI references an acquisition with a multibillion-dollar ceiling. The RFI requests information from potential vendors, including small businesses, on a cost per seat for 370,000 users “to manage common use services across cybersecurity, asset management, network services, and operations.” 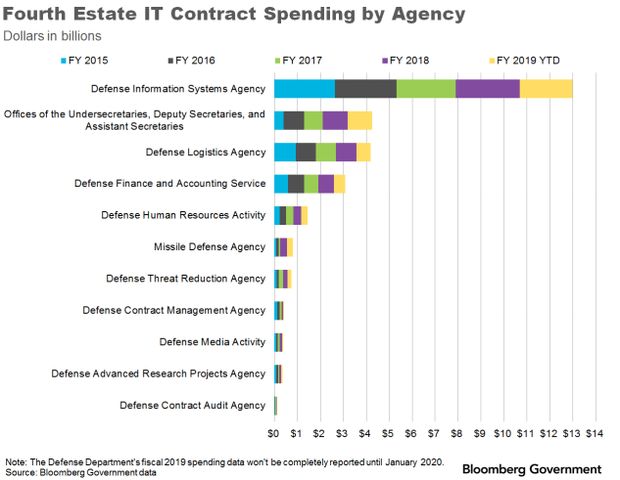 According to Bloomberg Government data, the 14 agencies involved in the consolidation spend about $6 billion annually on information technology. It’s possible that eventually much of that spending could be absorbed by the DES program. The top IT contractors from the beginning of fiscal 2015 through fiscal 2019 for fourth estate agencies are Leidos holdings Inc. ($3.5 billion in obligations), Perspecta Inc. ($1.4 billion) and General Dynamics Corp. ($1.2 billion).