The Defense Department set all-time highs in spending through fast-track “other transaction” agreements (OTAs) in fiscal 2018, issuing more than $4 billion in obligations. The Pentagon will break that record this year, having already surpassed that total in the first seven months of fiscal 2019, according to a Bloomberg Government analysis.

OTAs provide a way to speed up research and development of new systems or weapons, and to build more partnerships with nontraditional government contractors, such as academic institutions or Silicon Valley startups.

From the start of fiscal 2019 on Oct. 1, 2018, through the end of April, the last month in which complete data is available due to the Pentagon’s 90-day reporting lag, Defense agencies obligated more than $4 billion on OTA contracts, already beating the previous year’s total, according to Bloomberg Government data. Based on historic spending trends, Pentagon OTA obligations could reach $7 billion or more by the end of fiscal 2019. 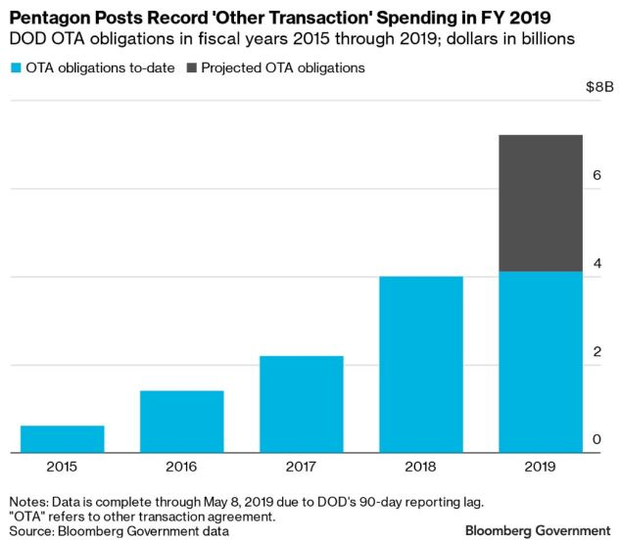 OTAs have become increasingly central to the way the DOD invests in advanced technologies. They enable the Pentagon and a handful of federal civilian agencies to sidestep the standard procurement process for research and prototyping projects. Instead of issuing and reviewing multiple solicitations and requests for proposals over the course of several months, defense officials can issue OTA awards in a matter of weeks, based on as little as a supplier’s 10-page white paper.

In fiscal 2015, for instance, only $1 out of every $38 the Pentagon obligated toward R&D contracts flowed through an OTA. By the end of fiscal 2018, it had risen to $1 out of every $7. The Pentagon has encouraged OTA use in official guidance, including its June 2019 digital modernization strategy, which called on defense procurement officials to “leverage the power and agility” of OTAs to acquire new technologies faster.

Since fiscal 2014, the DOD’s OTA obligations have grown by almost 80 percent year-over-year, according to a BGOV analysis. Based on this trend, the Pentagon is on track to obligate more than $7 billion via OTA in fiscal 2019.

Other historical indicators suggest that $7 billion may, in fact, be a conservative projection. From fiscal 2014 through 2018, defense agencies issued 70% of their total OTA obligations during the second half of each fiscal year. Considering that the Pentagon has already obligated $4 billion through the first seven months of fiscal 2019, it’s possible that the 12-month total could approach $10 billion.

The first half of fiscal 2019 has already seen sizable changes in the way the military services use other transaction authority. In only seven months, the Air Force has effectively doubled its OTA obligations — $1.2 billion since Oct. 1, up from $586 million in all of fiscal 2018. Air Force Space Command (AFSPC), which accounts for about 80% of that figure, is quickly establishing itself as a second epicenter for OTA activity, trailing only Army Materiel Command with $2.2 billion to date.

Consistent with previous years, the majority of fiscal 2019 OTA obligations have flowed through consortia, organizations established to foster collaborative R&D efforts between like-minded companies, universities, and nonprofits. A total of $2.5 billion OTA dollars were obligated through consortia, compared with $1.6 billion that the Pentagon paid directly to individual companies. Nearly 70% of that $2.5 billion has flowed through one nonprofit, Advanced Technology International, or ATI, which manages contracts for more than a dozen consortia.

It’s challenging to determine how funding is allocated to consortium members once a contract is awarded. Someconsortia publish the names of award recipients, but not all do. In response to congressional interest, the Pentagonagreed to share detailed spending figures with lawmakers, but this data is not reported publicly.

The largest individual recipient of OTA obligations so far in fiscal 2019 is Microsoft Corp. The Redmond, Wash.-based technology giant has accrued almost $265 million to date as part of an Army pilot program to develop heads-up displays for ground personnel using its Hololens augmented reality headset. Another $25 million came from an experimental network management project that the Air Force started in fiscal 2018.

A handful of federal civilian agencies are authorized to negotiate OTA agreements as well, including the departments of Homeland Security and Health and Human Services. In December 2018, DHS issued $10 million in OTA funding to the Border Security Technology Consortium for development of surveillance tools, as well as more than $50 million to state and local governments to upgrade their airport security capabilities. HHS, meanwhile, has paid Johnson & Johnson$41 million in fiscal 2019 to date as part of a five-year, $273 million contract to develop drugs to mitigate the threat of pandemic illnesses.

Based on BGOV’s analysis, the Pentagon and other federal agencies are likely to spend billions of dollars on existing OTA contracts before the end of the fiscal year. They’re also gearing up to award new contracts. BGOV has identified 94 active OTA solicitations that could lead to funding either via consortia or to individual companies directly.

Some of the top opportunities that BGOV analysts have profiled include:

Note to readers: In May, Bloomberg Government identified a discrepancy in the Defense Department’s reporting of OTA obligations that meant more than $1 billion in spending was missing from the Federal Procurement Data System, and by extension, our database. We notified Pentagon officials, and the problem has since been resolved.