When President Donald Trump tapped the military to build his signature wall along the border with Mexico, the Pentagon zeroed in on what looked like a project of opportunity — 37 miles along a drug-smuggling route in Arizona where, most importantly, it already owned the land.

With Trump eager for results, the Navy started planning work on a 30-foot steel bollard barrier along its Barry M. Goldwater bombing range at an estimated cost of $450 million. But there was a catch: unlike the Department of Homeland Security, which typically handles border barrier projects, the Defense Department can’t waive environmental regulations that can entail months or years of reviews. 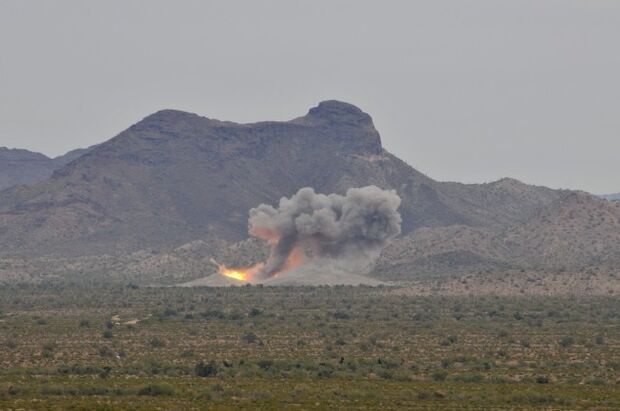 This week, though, the Defense Department said Trump’s national emergency declaration on Feb. 15 gives it the authority to override the National Environmental Policy Act and a raft of other regulations as it looks to repurpose $3.6 billion in its construction budget for U.S.-Mexico border barriers.

While environmental groups likely will oppose that stance, and funding remains an issue, it may eliminate a key obstacle to starting the wall even as the administration faces years of challenges to building on private property elsewhere along the border.

“Compliance would take time,” said Stephen Dycus, a law professor at the Vermont Law school who specializes in national security and environmental law. “A preparation of an environmental impact statement is a long, drawn-out, expensive process subject to challenge and very public.”

The Arizona project has largely flown under Washington’s political radar, though it’s been noticed by the House member whose district includes the bombing range.

“The Barry Goldwater range already has a border barrier, and any attempts by the Department of Defense to construct further barriers to build Trump’s vanity wall are misguided and unnecessary,” Rep. Raul Grijalva, D-Ariz., said in a statement. “I will continue to monitor this project—especially within the context of the president’s fake national emergency—to ensure that Trump’s unnecessary border wall is not forced upon the people of Southern Arizona.”

That barrier referenced by Grijalva was constructed by waiving environmental rules in much the same way the Defense Department is now saying it can do. Then-Homeland Security Secretary Michael Chertoff waived eight regulations, including the National Environmental Policy Act and the Endangered Species Act, to put on a fast track a $122 million project that placed vehicle and pedestrian barriers in 2007.

The military has done construction under past emergency declarations, though almost entirely at overseas bases where federal regulations generally don’t apply. The rules could be cast aside to the extent they impair or conflict with emergency construction, according to Lt. Col. Jamie Davis, a department spokesman. The national emergency law tapped by Trump says the defense secretary can use the construction funds for projects “without regard to any other provision of law.”

`Big Fuss About It’

Waivers for the Pentagon wouldn’t be entirely new.

The department and other federal agencies can appeal for emergency NEPA exemptions to the White House Council on Environmental Quality, which administers the law and negotiates terms of compliance. An array of other environmental regulations includes language allowing exceptions during emergencies such as natural disasters, legal experts say.

But when exceptions have been made “there was a big fuss about it” and it has been politically unpopular, Dycus said. The Navy, which was granted a council NEPA exemption, fought an environmental group over the effects of sonar training on marine mammals in the Pacific all the way to the Supreme Court in 2008, and eventually won.

It remains an open legal question whether Trump’s national emergency declaration allows the Pentagon authority to waive regulations on its own when it builds barriers on U.S. borderlands with rare or protected animals and habitats. Questions over what federal regulations apply are likely to arise in litigation over the wall, the Congressional Research Service reported in February.

“It’s not really clear yet what he [Trump] or the Department of Defense is going to be claiming about NEPA,” said William Buzbee, a professor of law at Georgetown University Law Center.

For now, the emergency declaration is facing more general opposition in the courts, where 16 states filed suit in February calling it unconstitutional, as well as on Capitol Hill. Lawsuits will challenge whether Trump has met the requirements to declare an emergency under the law, called Section 2808, and whether provisions on military construction apply to border barriers, Buzbee said.

As that plays out in the courts, and Trump faces the likely prospect of having to issue his first veto on a bill disapproving of the emergency declaration, the Pentagon is continuing with its planned environmental impact statement for the Goldwater range project, said Davis, the department spokesman. The department has yet to file a public notice of that statement.

Should the Pentagon move to waive the rules, it would almost certainly spur legal action from opponents such as the Center for Biological Diversity, which has sued the Department of Homeland Security over its waivers of environmental regulations for wall projects.

“If the military does try to rely on that language in 2808 to suspend or waive environmental or other laws, that would be challenged within the litigation that has already been filed over the [emergency] proclamation,” said Brian Segee, a senior attorney for the group.

To contact the reporter on this story: Travis Tritten at ttritten@bgov.com

To contact the editors responsible for this story: Paul Hendrie at phendrie@bgov.com; Bernie Kohn at bkohn@bloomberglaw.com; Robin Meszoly at rmeszoly@bgov.com