(Adds comments from business group leader in the eighth and ninth paragraphs.)

Senate appropriators are including language in their transportation spending bill that’s designed to support the $30 billion trans-Hudson Gateway bridge and tunnel project by allowing New York and New Jersey to count federal loans toward their cost-sharing requirements.

The provision in the fiscal 2020 appropriations bill (S 2520) advanced in committee last week, is aimed at thwarting the Trump administration’s opposition to the project. It would bar the Federal Transit Administration from enforcing a 2018 policy, but stops short of provisions in the House-passed version (H.R. 3055).

The project would revamp a series of railroad bridges and tunnels connecting New York and New Jersey, both major choke points on the busy Northeast Corridor linking Boston with Washington. The Trump administration has resisted granting federal funding to the project, with Transportation Secretary Elaine Chao denying an earlier round of grants by blocking states from using federal loans to pay for their portion of the price tag.

Chao told the House Transportation and Infrastructure Committee at a March 2018 hearing that she expects New York and New Jersey to have “skin in the game,” and called on the states to “step up and bear their fair share” of the project price. She also told the lawmakers that President Donald Trump has personally intervened to block the project. The project’s congressional defenders contend it’s appropriate for states to count the loans as their local contributions since they ultimately will repay the borrowed funds.

“Every day of delay increases the cost of the project and the risk that the tunnels will fail and cause a transit Armageddon that will severely impact travel for countless commuters and crush our regional and larger economy,” Senate Minority Leader Charles Schumer (D-N.Y.) said in a statement. Schumer has pushed against the Trump administration in past appropriations fights to secure federal funding for the project. 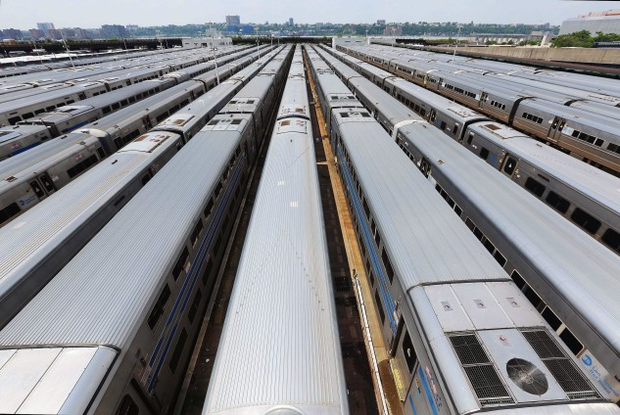 Photo by Mario Tama/Getty Images
Trains are parked at the Hudson Yards site in the New York City borough of Manhattan.

The Senate bill would reduce the pool of funding available through the Federal Railroad Administration’s State of Good Repair Program to $300 million, a decrease of $100 million from the previous fiscal year’s spending law. Congress authorized the program in the 2015 FAST Act surface transportation law (Public Law 114-94) with the goal of funding Northeast Corridor projects such as Gateway.

But, the project couldn’t qualify for the grants in the first place because the FRA limited eligibility to projects in the construction stage, not engineering or environmental review.

Mike Friedberg, executive director of the Coalition for the Northeast Corridor business group, said that while the organization appreciates the $300 million funding pool, they want to see a higher number so that the project has more opportunity to receive money.

“We still need champions to say” funding for Gateway is needed, Friedberg said.

The Senate bill also provides $680 million for Amtrak’s Northeast Corridor grants, a $30 million increase from the fiscal 2019 appropriations law (Public Law 116-6). That money isn’t specifically set aside for the Gateway Program, but could be spent on it.

“Investing in a safe and reliable passenger rail system is exactly what New Jersey residents and Americans across the country depend on,” Sen. Cory Booker (D-N.J.) said in a statement. “The federal dollars for Amtrak will improve the Northeast Corridor infrastructure and help us make progress on critically important initiatives like the Gateway Project.”

With assistance from Sarah Babbage