New Jersey isn’t critical to the presidential election, but it could be central to Republican efforts to take back the House.

Promising recent local election results, some quality candidate recruits and an array of Democratic-held seats that President Donald Trump carried in 2016 are giving the GOP reasons for optimism only a year after a midterm drubbing.

A massive shake-up in the delegation relegated the party to holding only one of the state’s 12 seats in the 116th Congress, making the Garden State one of the faces of a suburban realignment. But Republicans now see it as a land of opportunity, with the 2020 action playing out in five districts Democrats flipped over the past two cycles, four of which Trump had won.

“We definitely view New Jersey as one of the states that have the most pick-up opportunities,” said National Republican Congressional Committee spokesman Bob Salera, who cited prescription drug pricing, surprise medical billing and a proposed North American trade agreement as issues on which the party would target Democrats. 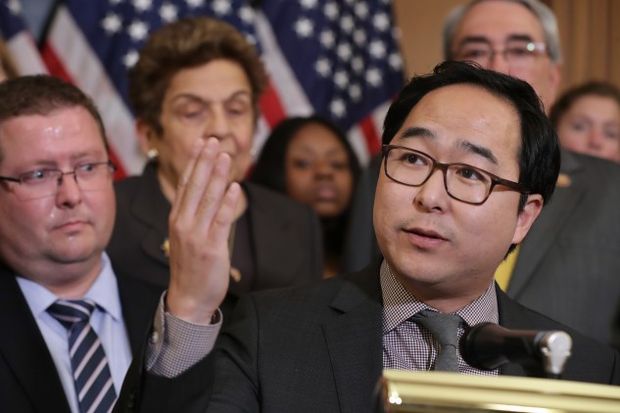 Former Burlington County Freeholder Kate Gibbs’ announcement last month that she will challenge Democratic Rep. Andy Kim in the 3rd District gave Republicans their latest challenger to tout. Another is state Senate Minority Leader Tom Kean Jr., who in April launched a campaign against Rep. Tom Malinowskiin the 7th District. Along with Rep. Jeff Van Drew in the 2nd District, their seats are rated as the most vulnerable in the state by the Cook Political Report.

Filling out the roster of Republican targets are Reps. Mikie Sherrill and Josh Gottheimer, a second-term member and the only non-freshman in the group.

Voters in the state have for decades favored Democrats running for statewide federal office — the last Republican elected to the Senate there was in the 1970s, and a GOP presidential nominee last carried it in 1988. The House seats caught up last year thanks in part to the animosity toward Trump displayed in suburbs across the country and to the local unpopularity of a GOP-backed cap on deductions for property taxes. Rep. Chris Smith is the lone elected New Jersey Republican on Capitol Hill.

The attempt to flip seats in New Jersey is a challenge for the GOP with a deeply unpopular Trump at the top of the ticket. The president received a 37% approval rating in the state, according to a Monmouth University poll conducted Sept. 12-16. The survey found that it was not much better — 43% — in the six traditionally Republican House districts in the state, five of which are held by Democrats. Also found in those districts: 52% of voters wanted someone new for president in 2020, while 41% supported Trump for re-election.

But Republican consultants and strategists said they were encouraged by last month’s local elections, in which Republicans picked up and held seats that overlapped with competitive congressional districts.

Within Kim’s district, Republicans held their two vulnerable 8th District state Assembly seats, despite being outspent by the Democratic candidates in an area that had been trending blue. And a trio of state lawmakers running in South Jersey who branded themselves “The Van Drew Team” all lost their re-elections to Republican opponents.

Van Drew, who has name recognition in his district stemming from his 17 years in the state legislature, has worked to stand out in Congress as a moderate Democrat. He was one of two in his party to vote against moving the impeachment process forward, and Trump on Twitter has personally highlighted helpful comments from Van Drew.

“Someone like Jeff Van Drew has to be extremely concerned,” NRCC Chairman Tom Emmer said in a recent C-SPAN interview.

In a brief interview at the Capitol on Thursday, Van Drew chalked up last month’s loss to the state Assembly districts being in a pro-Trump area of his larger congressional district, as well as to local and state politics.

“People have always run with the Van Drew Team, but when it really works is when I was running with them,” he said. “So it’s a bit different.”

The Democratic Congressional Campaign Committee is planning to tie Republican candidates to the actions of previous GOP lawmakers, on issues such as health care costs and taxes.

“Democrats are laser-focused on local issues while Washington Republicans are busy propping up their candidates who will not be able to escape their party’s toxic agenda,” DCCC spokeswoman Christine Bennett said.

Some incumbent Democrats in New Jersey and elsewhere are trying to distinguish themselves from their own party’s role in impeachment and supporting progressive policies. Vulnerable lawmakers, like Kim, are focusing on local issues and staying away from the national fray.

Top of the Ticket

A strong turnout for Democrats in 2018 bodes well for the party in a presidential year, said John Weingart, associate director of the Eagleton Institute of Politics at Rutgers University.

“The conventional wisdom has been in off-year elections like 2018, Republicans do better than they do in presidential elections within largely Democratic states,” he said. “So that would suggest that the Republicans challenging the new or relatively new Democrats have something of an uphill battle.”

Despite his anemic statewide ratings, some Republican strategists said Trump being back on the ballot will help other Republicans running in those more conservative areas of the state that they expect to support him again in 2020. Ethan Zorfas, a GOP strategist working for defense contractor project manager Brian Fitzherbert, who is taking on Van Drew, said that both Trump and Democratic Gov. Phil Murphy will help motivate Republicans to vote.

“Between a combination of Trump at the top of the ticket and people frustrated with the governor, things are going to swing in our direction,” Zorfas said.

Chris Russell, a consultant for both Gibbs and venture capitalist David Richter, who is also challenging Van Drew, said the impact of the top of the ticket won’t be fully known until Democrats pick their nominee to challenge Trump. Republicans running in 2019 in that southern New Jersey district were aided by Democratic presidential candidates going further to the left during the primary and pushing major progressive ideas, he said.

“If Democrats go out and nominate someone like Bernie or Warren, they’re going to find themselves with the same set of problems in 2020 as they did in 2019,” he said, adding that many voters in New Jersey are “not far right — but they’re not far left either.”