(Updated Dec. 16 story to reflect Walker’s decision not to seek office in 2020.)

North Carolina may play a starring role in the fight for control of Congress in 2020. A court-ordered redistricting gives Democrats a strong chance to add two House seats they wouldn’t have been able to count on otherwise, and that in turn diminishes Republican efforts to regain the majority.

The redrawn map will not only narrow the GOP’s dominance of the state’s House delegation but also force incumbents, even those in relatively safe districts, to seek re-election in significantly new territory.

Republicans are favored in eight of the 13 reconfigured districts, compared with 10 seats the GOP now holds. A panel of North Carolina judges in October blocked the map used in 2018 after North Carolina Democratic voters filed a lawsuit challenging it as an extreme partisan gerrymander that violated the state constitution. The Republican-controlled state legislature approved new congressional boundaries last month that the state court accepted.

“As for taking back the House, an uphill battle just got steeper,” B.J. Rudell, associate director of the Center for Political Leadership, Innovation, and Service at Duke University, said in an e-mail. He also noted that “a likely loss of two congressional seats is the best Republicans could have hoped for in a state where the electorate has been gradually souring on GOP House candidates.” Republicans received 56% of the vote in 2014, 53% in 2016, and 51% in 2018. 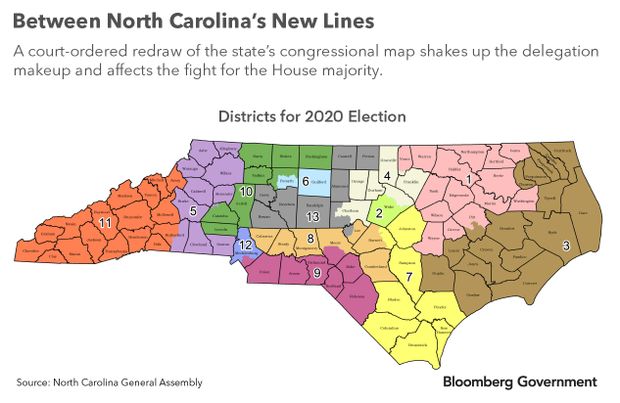 Reps. George Holding (R) and Rep. Mark Walker (R) aren’t seeking re-election after their districts were redrawn as Democratic strongholds. Either or both could run for political office in 2022, after North Carolina’s congressional lines will be redrawn again following the 2020 census and subsequent reapportionment of congressional districts. North Carolina probably will gain one House seat in reapportionment, and there will be statewide opportunities as well.

“Republicans understand that whatever short-term gains Democrats make in 2020, the real battle will be the drawing of new maps in advance of the 2022 elections,” Rudell said.

Most of the reconfigured districts still lean strongly Democratic or Republican, even though North Carolina is competitive in statewide elections. In 2016, President Donald Trump defeated Hillary Clinton in North Carolina by just 3.7 percentage points, though in each of the 13 districts the winner’s margin of victory was at least 9 points. Democrats are concentrated in larger metropolitan areas and can be lassoed into compact districts that vote overwhelmingly Democratic, while Republican voters are more efficiently distributed.

Here’s a district-by-district analysis of the new North Carolina map. The candidate filing deadline is Dec. 20; the primary is March 3.

1st District (Rocky Mount, Wilson, Goldsboro, most of Greenville). The northeastern district of Rep. G.K. Butterfield (D) becomes less strongly Democratic after losing its large share of heavily Democratic Durham County. Butterfield would still be favored to win re-election, though probably not with the huge margins to which he’s become accustomed since taking office in 2004.

2nd District (Cary, most of Raleigh). Holding, re-elected with 51% in 2018, had little chance of winning in a district that’s wholly within Wake County, a major source of Democratic votes in North Carolina. Democrats running here include Deborah Ross, a former state legislator who lost a close race to Sen. Richard Burr (R) in 2016, and Monika Johnson-Hostler, a member of the Wake County Board of Education.

3rd District (Jacksonville, New Bern, Kinston, part of Greenville). The district of Rep. Greg Murphy (R) remains strongly conservative, a swath of eastern North Carolina reaching from the Virginia border and the Outer Banks south past Jacksonville and Camp Lejeune. Murphy, who overwhelmingly won a special election in September, loses more of his Pitt County base in and around Greenville to the 1st District.

4th District (Durham, Chapel Hill, part of Raleigh). Democrat David Price, the dean of the North Carolina delegation and a House member for more than three decades, is seeking re-election in a heavily Democratic district that was substantially revised. Price loses much of Wake County to accommodate the new 2nd District. He gains the balance of Democratic-friendly Durham County, including Duke University, where Price was a political science professor.

5th District (Gastonia, Lenoir, Shelby). Rep. Virginia Foxx (R), the ranking member of the Education and Labor Committee and a House member since 2005, gets a more staunchly Republican district but a lot of new territory. More of the new district’s population, including all of Gaston County west of Charlotte, comes from the current 10th District of Rep. Patrick McHenry (R) than from Foxx’s current district.

6th District (Greensboro, High Point, most of Winston-Salem). Walker isn’t seeking re-election in a district that includes Guilford County (Greensboro) and part of Forsyth County (Winston-Salem). Most of Walker’s constituents were drawn into the 13th District, a heavily Republican area where Walker declined to challenge two-term Rep. Ted Budd (R) in a 2020 primary. Walker could run to succeed Burr in 2022. Kathy Manning, a lawyer who lost a bid to unseat Budd in 2018, and Bruce Davis, a former Guilford County commissioner defeated by Budd in 2016, are seeking the Democratic nomination in the 6th.

7th District (Wilmington). Rep. David Rouzer (R) is favored to win re-election in a strongly Republican district that runs from Johnston County near Raleigh south past Wilmington to the Atlantic Coast and the South Carolina border.

8th District (Fayetteville, Concord, Kannapolis). The district of Rep. Richard Hudson (R) becomes a little less Republican-leaning in part by absorbing all of Cumberland County, which includes Fayetteville and is presently divided between the 8th and 9th Districts. It loses its share of Rowan County, an area Hudson won with 76% even as he garnered a 55%-45% district-wide win in 2018. Under the new map, the reconfigured 8th rivals the Charlotte-area 9th as North Carolina’s most competitive district.

9th District (part of Charlotte and suburbs). The district of Rep. Dan Bishop (R), the winner of a nationally watched special election in September, wasn’t significantly changed. The 9th would still be anchored by southern Mecklenburg County and Union County in metropolitan Charlotte and would still lean Republican, though not overwhelmingly. Bishop edged Dan McCready (D) by 51-49% in the special election.

10th District (Statesville, most of Mooresville and Hickory, part of Winston-Salem). McHenry, the top Republican on the Financial Services Committee and a House member since 2005, gets a more overwhelmingly Republican district but one with significant new territory. McHenry currently represents 30% of the people in the new 10th.

12th District (most of Charlotte). Rep. Alma Adams (D) was the biggest winner under the remap: her 12th remains a Democratic stronghold within Mecklenburg County (Charlotte), and she retains 94% of her current constituents in the new map — the highest share for any incumbent.

13th District (Burlington, Salisbury, Thomasville, Asheboro). Budd, who currently represents a mildly Republican-leaning district, is seeking a third term in an overwhelmingly Republican district that no longer includes Democratic-leaning Guilford County. Budd could have been vulnerable in a Republican primary against Walker, who doesn’t live in the new 13th but now represents more of its population than Budd. Members of Congress aren’t required to live in their districts.