The U.S. Navy awarded its massive SeaPort Next Generation (Seaport NxG) contract to 1,870 companies in December 2018 and is already kicking off plans to add more by fiscal 2021.

On-ramps to SeaPort NxG, a major professional services vehicle, are the topic of this week’s Bloomberg Government Top 20 Opportunities. The Naval Sea Systems Command will reopen the RFP for a new tranche of companies through a rolling admissions process beginning around January 2021, according to a July 26presolicitation announcement.

The decision to begin acquisition planning for the on-ramps comes rather quickly, given the lack of activity on Seaport NxG since it was awarded in December. 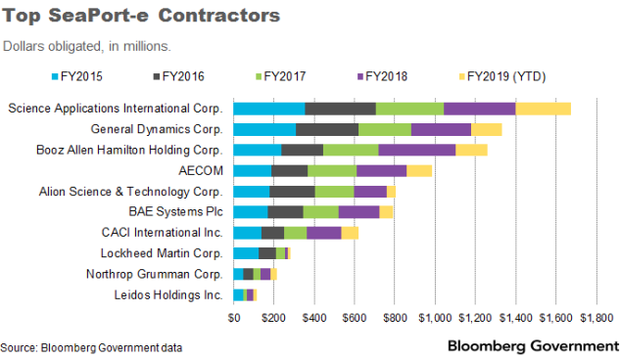 When SeaPort NxG was first competed in fiscal 2018, the terms and conditions stated that contractors submitting a SeaPort NxG bid had to show work “in support of the Navy.” To qualify for an award, a company must have some work, as a prime contractor or subcontractor, directly with the Navy. Of the 1,894 companies that submitted bids previously, 1,870 received awards.

For companies that haven’t done direct work for the Navy and are interested in a slot on Seaport NxG, there’s plenty of time to compete for work at the Navy before the agency solicits bids in January 2021.

Companies interested in competing for work on Seaport NxG can use BGOV to capture upcoming opportunities. Click here for a list of 1,411 orders totaling $15.2 billion that are set to expire after Oct. 1, 2019, and are likely to be competed on Seaport NxG.

Or, click here for a list of open opportunities at the Navy if you are a contractor seeking new work to establish past performance before submitting a Seaport NxG bid in January 2021.