(Adds new ad buy in Maine in 18th paragraph. Earlier version was corrected to fix reference to law firm in the ninth paragraph.)

A shadowy group has spent more than $13 million since July advertising in states with vulnerable senators to oppose legislation that would rein in medical bills that take patients by surprise.

The campaign by a group calling itself Doctor Patient Unity, playing out on television, radio, and on social media in more than 20 states, is helping muddy the congressional debate over how to combat surprise medical bills and could make it harder to pass legislation this year, congressional aides familiar with the issue said in interviews, speaking on condition of anonymity.

Click here to view a video of one of the ads.

The ad buys represent the most-expensive campaign on any health-related topic Congress has taken on this year, according to data from Advertising Analytics and Federal Communications Commission filings. That they’re targeting lawmakers up for re-election in 2020 sends the message that deep-pocketed interests are paying attention to how lawmakers vote on the issue.

“Ads like these with large budgets behind them effectively serve as a warning that even more money could be used to unseat the legislator if they vote the opposite way,” said Erika Franklin Fowler, who directs the Wesleyan Media Project, which tracks and analyzes political advertising in real time during elections.

The group has made seven-figure advertising purchases in seven states and six-figure buys in six more states. They all warn against “rate setting” and the group’s websiteurges listeners to contact lawmakers to oppose “stand up to the insurance industry and demand they pay for their fair share.” 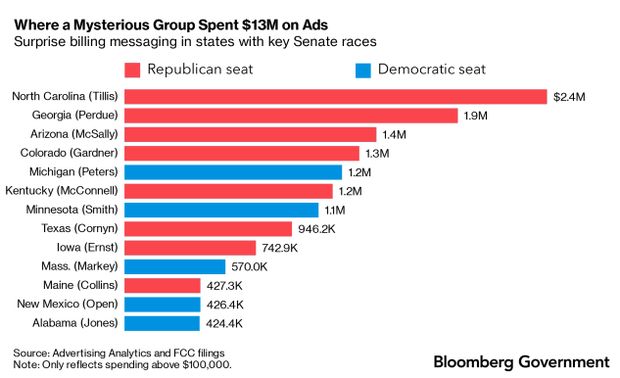 Who is ultimately paying for these ads is shrouded in secrecy. The television ads are known as “issue ads” and therefore don’t require Federal Election Commission disclosure.

The ads are all being bought either by Del Cielo Media of Alexandria, Va., or its parent company, Smart Media Group, also of Alexandria, according to FCC filings. Both companies didn’t return repeated messages seeking comment.

Del Cielo has been linked to Republican campaigns. The group bought ads for political action committees opposing Democratic candidates such as Phil Bredesen, the former Tennessee governor who lost a Senate bid to Republican Marsha Blackburn in 2018, according to FCC filings. Del Cielo got more than $1.2 million from a political action committee favoring President Donald Trump, according to filings with the Federal Election Commission.

Doctor Patient Unity was formed as a corporation in Virginia by a limited liability company with the same address as the firm Holtzman Vogel Josefiak Torchinsky, according to state business filings. The law firm provides “strategic counsel and compliance advice” to entities involved in political and policy affairs, according to its website.

By using middlemen such as media buyers and corporation creators, the entities funding the ads can conceal their identities.

“One of the issues with the ‘dark money’ groups is that, by design, the identity of donors are intended to remain hidden,” said Anna Massoglia, a researcher at the Center for Responsive Politics.

The ads come amid a flurry of activity on surprise medical billing. House and Senate committees have approved legislation to ban what’s known as balance billing, where a provider seeks payments directly from patients for charges their insurers won’t cover.

Both the House and Senate bills, H.R. 3630 and S. 1895, would require health-care providers in certain emergency circumstances to accept a set rate, based on median rates for those services, when they treat patients as out-of-network providers.

Some senators, including some of those targeted by Doctor Patient Unity such as David Perdue (R-Ga.), have backed surprise medical billing legislation (S. 153) that takes a different approach, empowering a third-party arbitrator to settle billing disputes. While the group’s purpose in targeting a lawmaker who opposes rate-setting isn’t clear, it’s a matter subject to change in any compromise measure.

Sen. Thom Tillis (R-N.C.) in a statement said he’ll work to “improve and finalize” the Senate’s surprise medical billing legislation. His office didn’t respond to a request to clarify whether he supports the arbitration or rate-setting approach.

Doctor Patient Unity spent more than $300,000 Aug. 23 on ads that appear to target Sen. Jeanne Shaheen (D-N.H.), a potentially vulnerable Democrat, according to FCC filings. The two purchases of ad time are both in stations in Manchester, N.H.

Shaheen hasn’t been outspoken about surprise medical billings this year, but in 2018 introduced a bill (S. 3541) that would have tackled the same issue by capping the amount that hospitals and physicians could bill with out-of-network charges to people with individual market coverage.

Pushing Back on Rate Setting

Health-care provider and hospital groups have also pushed back on the rate-setting approach, claiming it unfairly favors insurers and warning it could discourage doctors from practicing in certain areas where the rates would be lowest. These groups have spent heavily to influence the bills this year.

Health-care providers, particularly specialists, have a lot of money at stake. The Senate version would cut enough costs from the health-care industry to lower insurance premiums nationwide by about 1%, the Congressional Budget Office estimates.

Some lawmakers worry that private companies with lots of capital, such as private equity firms that own health-care provider staffing groups, could be putting their money into opposing the surprise billing legislation.

Yale University health economists in 2018 looked at two emergency room outsourcing companies, EmCare and TeamHealth, and found they took advantage of an environment where they could either charge high out-of-network rates to patients or negotiate higher in-network rates with insurers.