Supporters and opponents of impeaching President Donald Trump are pouring $20 million into political advertising to influence vulnerable lawmakers in an unprecedented strategy that experts say reflects the growing role of paid media in shaping public opinion.

“Of course, the media environment and platforms for paid advertising in 1998 were nothing like today’s,” he said. “We had a news cycle then; we have a news cyclone now.” 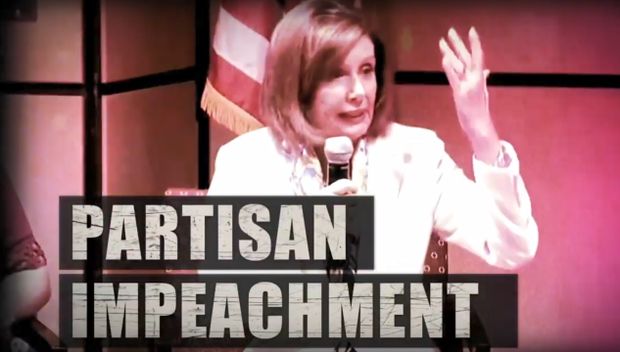 Political scientist Michael Franz of Bowdoin College said the impeachment battle is emblematic of skyrocketing spending on all types of political advertising in recent years.

Lawmakers, candidates and other political players must compete to break through the “scattered attention” and entrenched partisanship of voters, requiring more spending for smaller changes in public opinion, according to Franz, a co-director of the Wesleyan Media Project, which has studied political advertising since 2010.

This works to the advantage of Republicans in the impeachment battle because they’re trying mainly to hold onto the lawmakers and voters already siding with Trump, rather than win over Democrats and independents, Franz said.

Trump will “claim a massive victory” if he’s acquitted in a Senate trial and will try to use that to help his re-election campaign, but it’s doubtful impeachment will be a major factor in next year’s campaign, Franz said. He said it may be a plus for Democrats to get the impeachment battle out of the way now so they can “run a campaign on the issues” next year.

The latest TV ads are set to run through Dec. 19, just after Democratic leaders aim for an impeachment floor vote. AAN announced this week it was adding $1.5 million to a previous $7 million ad buy.

Ads in the districts of Republican Reps. Rodney Davis(Ill.) and John Katko (N.Y.) thanked the lawmakers for “standing against impeachment.”

Groups backing the impeachment inquiry had spent about $2.3 million on TV ads before Bloomberg’s announcement of an additional $10 million in funding. The nonprofit House Majority Forward spent $1.5 million in October on ads defending Democrats targeted by anti-impeachment ads, but it hasn’t spent on TV ads since then.

Another nonprofit supporting the impeachment inquiry, Defend American Democracy, sponsored nearly $800,000 worth of ads last month, but has been quiet since then. Donors funding these ads weren’t disclosed, but House Majority PAC, the super PAC slated to receive Bloomberg’s contribution, does report donors to the Federal Election Commission.

Both sides also have spent on digital ads, including a major anti-impeachment drive on Facebook by Trump’s re-election campaign. The Trump ads mainly target supporters of the president and seek to use the impeachment debate to drive enthusiasm and fundraising.

Too Removed From Election

Speaker Nancy Pelosi and other Democrats thanked Bloomberg publicly for his latest round of financial support for the party, especially with Republicans dominating the spending so far.

But Democratic consultants said the avalanche of money on both sides is unlikely to change many votes in Congress since the messaging may not even be remembered by voters in next year’s elections.

Impeachment is “too removed from next November” to have an impact, Democratic pollster Jefrey Pollock said. “I think we’re all spending a lot of time, money, and energy, that’s unlikely to move a vote.”

Democratic pollster Celinda Lake said she believed the heavy spending by anti-impeachment forces is having the effect of reinforcing Republican lawmakers’ loyalty to Trump by showing “the kind of outside money that could come through if they vote for impeachment.”

Republican pollsters who conducted surveys for one of the groups said the media spots are working.

“The left is clearly losing the messaging battle over impeachment and American Action Network’s campaign is having a measurable impact in shaping the public’s mindset in the fight,” said a memo from Jim Hobert and Glen Bolger of Public Opinion Strategies. “Voters say they are less likely to vote for a Member of Congress who supports impeachment.”

Most Democratic lawmakers being targeted didn’t respond to messages asking for comment. But a spokesman for Lee, a Las Vegas-area freshman who is still undecided on impeachment, said the TV spots won’t influence her vote.

“The Congresswoman firmly rejects the idea of voting based on attack ads,” Jesus Espinoza said in an email.